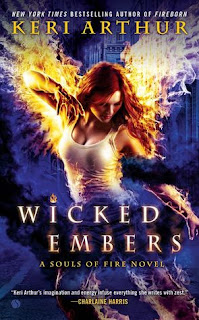 In Wicked Embers, the second book in the Souls of Fire series, for Australian author Keri Arthur, Emberly’s prophetic dreams are becoming increasingly harder to deal with. As a phoenix – a cyclically reborn and long-lived paranormal – she thought she’d witnessed a lot in her many lifetimes, but nothing more terrifying than the ghastly creature in her latest dream. Determined to stop it at all costs, she’ll do whatever it takes, even if it means putting her life on the line. However, the creature isn’t the only thing she’s desperately searching for, as her hunt in finding the stolen research for a cure to Crimson Death – a virus created by a failed government experiment – continues.
If you’ve never read a book by this author, you don’t know what you are missing; especially if you’re a fan of Paranormal or Fantasy, specifically Urban Fantasy. She has an amazing way of grabbing your undivided attention from the very first line, and the one to this book certainly had me intrigued to read more.
Another thing Ms. Arthur is really good at, is writing resilient and fascinating heroines, and Emberly is no different. She’s all for kicking butt and taking names. Not afraid to charge in; and figuratively, stare death in the face. In fact, when this author combines such interesting characters, a non-stop action plot, a cross between spine-tingling and playful dialogue as well as using the advantage of her hometown by introducing the various areas of Melbourne, you can envisage many of the scenes as you read. Including the scorching sex scenes, which strengthen the overall story, and create a nice balance in Emberly’s life, so it isn’t all work and no play?
In fact, the intimate moments she shares with her phoenix mate, Rory, illustrate how impossible it is for them to survive without the other really well. While her relationship with her investigative partner, Jackson, provides plenty of amusement with the way they tease each other. Enough to spill over onto the pages with sex scenes that produce nearly as much heat as the fire they can both create.
Lastly, I would recommend this to fans of paranormal and Urban Fantasy. But read Fireborn, the first of this series, as it introduces you to the characters and why she’s desperately searching for the Crimson Death cure in this book.
Overall Rating:

BOOK INFO: July 7th, 2015 | by Penguin Berkley | Souls of Fire #2
Crimson Death, the plague like virus spawned from a failed government experiment to isolate the enzymes that make vampires immortal, continues to spread. Emberly and her partner, Jackson Miller, are desperately seeking the stolen research for a cure before the virus becomes a pandemic.

But their mission is jeopardized by another threat uncovered in Emberly’s prophetic dreams. A creature of ash and shadow has been unleashed on a murdering spree. Now Emberly must summon all her gifts and investigative knowledge to put an end to this entity’s brutal rampage—even if it means placing herself in harm’s way....
at 14:56