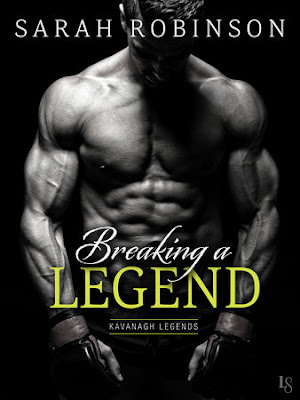 In Breaking a Legend (Kavanagh Legends #1) by Sarah Robinson, after a gruesome leg injury destroys his career as an MMA fighter, Rory Kavanagh has been hitting the bottle heavily and popping pills like their candy to deal with the pain he still suffers. However, meeting Clare, the new bartender at O'Leary's Pub, has Rory turning over a new leaf in hopes she'll give him a chance at winning her heart.
Trusting people isn't easy for Clare Ivers, especially when the dangerous man she's hiding from could find her at any moment. Yet, the more she's around the gorgeous Rory, the more she finds herself considering giving him a chance. But how can she when he's doing everything she despises to alleviate his pain.
What an exciting, fast-paced, spellbinding read this book was, and one that packs quite a punch right from the prologue. Where its plot hooked me immediately, and encompasses a heroine running from her past, and a hero struggling to cope with his injury, as well as losing his career.
The dialogue was well-written and intense due to both characters back stories. Rory's need for drinking and popping pills, and Clare's dislike for both makes for interesting reading. Especially once I learned why she's so anti drugs and alcohol. The playful banter between Clare and Rory charmed me. He's determined to prove that she can trust him. That he can be the sort of man she needs, if she's willing to give him a chance.
I loved both the main and secondary characters. Clare is brave with the way she's determined to start over, even knowing the danger she faces, if her past catches up to her. She's kind-hearted by trying to reclaim parts, of her past when it comes to her love, for animals. And finally, she's tenacious in her need to learn self-defense in order to protect herself from the coming danger. While Rory, he's strong, kind-hearted and protective. The way he's determined to make Clare feel safe is wonderful, because the heroine definitely needs to feel the way Rory makes her, which is cherished. How just being around Clare manages to change him, helps him to re-discover the man he was before his injury was great. He needed her, just as much as she needed him, to help heal from the pains of their pasts. Rory's dog also helps to bring the main characters closer together.
The sex scenes are sizzling and heat up the story at the perfect moments, especially the first scene. As the sexual tension was so high that I was hoping the intimacy would happen sooner rather than later. Rory treats Clare like the precious gift she's become to him, which she needs. As it's not easy for her to let her guard down, to trust someone as much as she does Rory.
Overall, I loved this story and am looking forward to the next one of this series, as Rory's brothers were fantastic in this book. I liked them almost as much as Rory. Almost. I highly recommend this novel to all romance readers, but most especially if you're after a really good sports romance..
OVERALL RATING:


Perfect for fans of Katy Evans and Monica Murphy, Sarah Robinson’s blistering-hot series debut introduces the Kavanagh brothers—mixed martial arts fighters who work hard, play hard, and love with all their hearts.
As one of the big names at his family’s gym, Legends, MMA star Rory Kavanagh is used to being in the spotlight—until a gruesome leg injury knocks him out of the cage. Rory is left feeling sidelined in more ways than one, battling the inner demons that come with losing the one shot at his dreams. Then Clare walks into his life and gives him a new dream: winning her heart. There aren’t many new faces in Woodlawn these days, but this tough, beautiful stranger makes Rory want to get his life back into fighting shape.
Clare Ivers doesn’t think she’ll be able to tell anyone what really brought her to the close-knit Bronx neighborhood where she just started bartending. But her life’s on pause and her past is catching up fast, try as she might to move on—with new friends, steady work, and a chiseled alpha male trying to get her attention. Even though Rory’s more than a little intense, she can’t deny that her heart beats faster when he looks at her with those soulful silver eyes. Clare thought she was done with love, but Rory might just be man enough to show her she thought wrong.
at 20:14