REVIEW: THE MINE by JOHN A. HELDT 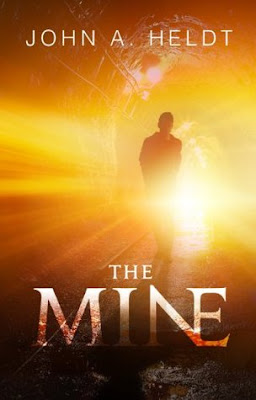 In The Mine by John A. Heldt, not long after he begins  to explore an abandoned mine with a friend, Joel Smith finds himself transported to another time. May 1941 to be exact, a time where war may begin at any moment, and his confident, witty attitude is the only thing that may get him through the anomalous situation. At least until he can find a way to return to his time period -- the year 2000.
Having only read a dozen, or so time travel romance novels, of which I enjoyed, this one impressed me. Not only with its sweet, fast-paced, adventurous plot, but the surprise Joel received at the end. I so wasn't expecting that. The plot was slow to get started, but once Joel emerges in 1941, I found it to be a real page turner.
As for the dialogue, it was fun but intense as Joel struggles to adjust to being transported to a new time period, and knowing that changing things even the tiniest bit could alter the future. There's also the fact that so much that he's used to in his time hasn't been invented yet, such as his cell phone.
Joel is a likeable character from the beginning, and charmed me with his confident and witty personality. It helped him make friends easily, although he knows he can't give too much away about his life to those he meets, especially Grace and his grandmother. He manages to make the best of an anomalous experience with his knowledge of the future, and how he entertained those he became close to with such wisdom made me grin.
Overall, this was an engrossing tale Mr. Heldt has penned, of which the secondary characters charmed me almost as much as Joel. Also, I loved how it concluded with a surprise ending. Joel deserved to be happy. I would recommend this if you love time-travel romance, or are looking to read your first time-travel romance.
OVERALL RATING:

BOOK INFO:
Publication Date: December 6th, 2013 (First Published January 1st, 2012) / Northwest Passage #1
In May 2000, Joel Smith is a cocky, adventurous young man who sees the world as his playground. But when the college senior, days from graduation, enters an abandoned Montana mine, he discovers the price of reckless curiosity. He emerges in May 1941 with a cell phone he can't use, money he can't spend, and little but his wits to guide his way. Stuck in the age of swing dancing and a peacetime draft, Joel begins a new life as the nation drifts toward war. With the help of his 21-year-old trailblazing grandmother and her friends, he finds his place in a world he knew only from movies and books. But when an opportunity comes to return to the present, Joel must decide whether to leave his new love in the past or choose a course that will alter their lives forever. THE MINE follows a humbled man through a critical time in history as he adjusts to new surroundings and wrestles with the knowledge of things to come.