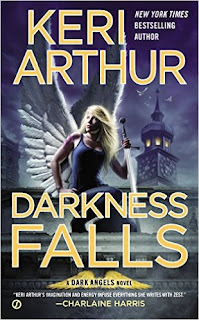 Risa Jones has been pushed to the brink by those that want her to find the keys that open the gates of hell, but by none more so than Madeline Hunter. Pitting herself against the powerful vampire isn’t Risa’s best option, but there doesn’t seem to be any other choice, especially when the vampire threatens those she loves if she doesn’t find the final key.

This is the seventh and final book of the Dark Angel series by Ms. Arthur. From the very beginning, the plot is well-written, fast-paced and filled with plenty of action. Risa faces some uphill battles and how she comes through relatively unscathed never ceased to amaze me. Honestly, she’s one tough heroine and that’s what I liked so much about her. As for the dialogue, I love how Risa teases Azriel, her lover and the father of her unborn child. Her one liners seemed to coax a smile from me every time, which was a good thing. Because honestly, what they’ve faced both in this book and previous ones could have changed them for the worse and yet it hasn’t. She’s still the same strong heroine determined to stand up for what she believes in.

Although the chemistry between Azriel and Risa is strong, there doesn’t seem to be a lot of romantic moments between the pair. It seems she’s always on the run, fighting to find the key and stay alive. But then again, the steamy kisses they share are enough to keep a reader interested if you’re a complete fan of the romance genre.

Overall, this book was a great end to the series and I’m really looking forward to other books that Ms. Arthur releases in the future. Not only because she’s an Aussie just like me, but because she writes the most interesting heroines that have some seriously hot heroes by their side to help them face down whatever is thrown their way.
Sensuality Rating: Mildly Sensual

﻿BLURB:
The search for the last key to the gates of hell has begun, and half-werewolf, half-Aedh Risa Jones is in more danger than ever—and one misstep could prove ruinous. It’s only a matter of time before Madeleine Hunter, the dangerous head of the vampire council, begins her hunt for complete domination. And for Risa, that comes with an alarming ultimatum: hand over the last key to Hunter or, one by one, her loved ones will die.
Now, it’s a race against time for Risa to save those she loves, and to stop Hunter’s apocalyptic plan to open the very gates of hell.
BUY LINKS: Amazon | B & N | iTunes﻿