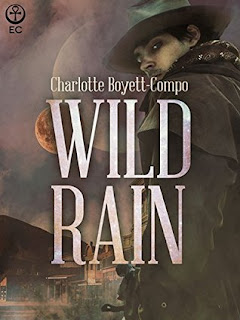 Rain-Runner Kiel seems to be the only man game enough to take on the job of town sheriff in order to stand against the Brotherhood of the Domination, a sect that think people of an ethnic group other than theirs are beneath them. When the woman he’s always loved returns to town, things become complicated as he not only tries to keep her out of harm’s way but endeavors to take down the Brotherhood once and for all.

Arriving back in a town she left behind a long time ago, Kirree Kennaugh does her best to protect the man she has always loved. It seems he’s becomes a target of the Brotherhood after crossing into forbidden territory and arresting two of their members. Determined to keep Rain safe, she will do whatever it takes to get the death sentence he faces – if the Brotherhood catch him – expunged.

Books containing inter-racial relationships never cease to draw me into them as you know the hero and heroine are going to have to overcome many obstacles to achieve their happy ever after. This book grabbed my attention from the very first chapter as Kirree deals with the fact that she’s back in a town she left behind a long time ago and thought she’d never return to, only to soon learn that Rain has incurred the wrath of the Brotherhood. Kirree is the sort of heroine that will quite possibly have a reader liking her from the moment she’s introduced. Well, she at least had a fan in this reader. She’s strong and brave. Her determination to confront the Brotherhood and possibly sacrifice her own future to protect Rain was one of the many things I liked about her. Since it wouldn’t have been easy to face that bunch of fanatics, whom believe they’re so much better than everyone else.

As for the dialogue, I loved that both the main characters never gave up on each other when it seemed so many people were against their relationship. It illustrated their love was worth fighting for. Also, the secondary characters added great entertainment, especially the ones willing to stand at Rain’s side. The scene where Rain asks Brody about his shooting skills and his reply was ‘Does a fish piss in the pond’ made me laugh. The sex scenes were scorching and I liked how persistent Kirree was in pursuit of an intimate relationship with Rain. Since there was so much love between them that deserved to be explored. What I liked so much about both characters was their determination to keep the other safe, even at the risk to their own personal safety.

Overall, this was a really good story that has me hoping that some of the secondary characters get stories of their own.

BLURB:
Though most consider him nothing more than a half-breed, Sheriff Rain-Runner Kiel is the only thing standing between the locals and the demonic sect known as the Brotherhood. All he’s ever wanted is to live in peace with Kirree, the woman he’s loved since childhood.
Kirree loves Rain more than anything, but the Brotherhood stands in the way. They are determined to force her to marry one of them. She’ll stay locked behind their walls, at the mercy of men who treat women as chattel.

Rain will do anything, even offer his life for hers, to put a stop to their nefarious plan.

Inside Scoop: Not for the faint of heart. The pain in this story is vivid, the emotions more so.