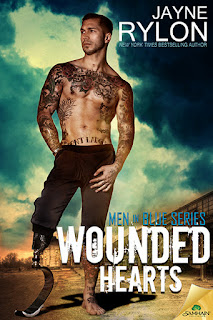 Surviving a harrowing ordeal at the hands of her mad-scientist boss, Ellie is struggling to deal with her endless nightmares, for fear of ending up in a similar situation to the one she’s just recently escaped from. A night out with the girls seems like the perfect way to start putting her past behind her, but when she wins almost fifty-thousand dollars at a casino, it appears her life isn’t going to get better -- at least not anytime soon. Someone wants the money and will do anything to get it, even rob her in her own home.
Saving Ellie lost him a lot including his job as an undercover operative, his goals in life as well as part of one leg. Yet Lucas doesn’t regret his decision to help in her rescue and would do it all over again in a heartbeat, even if the outcome turned out to be the same. When he receives a call from one of his friends asking him to check on Ellie after her big win, he reluctantly agrees. If only to catch a glimpse of the woman he’s come to really care for after avoiding her for the past few months.
This was by far the best Men in Blue story yet. It was powerful, emotional and fueled by some very fast-paced action as Lucas and Ellie try to stay one step ahead of the people that intend to take back their money. Honestly, I couldn’t believe how quickly I finished it. The plot captivated me from the moment Ellie won the money, as I knew without a doubt that her win would wreak havoc on her life and invite Lucas back into it to protect her. There was no way he could stay away when she needed him and that had me cheering. Because this couple were one that desperately needed each other to heal after everything they’d both been through in the past.
With the dialogue, there were some moments where I could find humor, especially when Ellie’s friends grilled her about her relationship with Lucas. But most of it was emotionally driven, stemming from the couple’s back stories and that I really did enjoy. It illustrated how far this couple had come since Ellie was rescued and how they’ve dealt with it. The past has certainly made them both stronger, even if it doesn’t seem like it at times.
Scorching sex scenes heated up the pages at just the right moments in the book and ascertained that love can conquer all. Certainly, Ellie proves that through her easy acceptance of his injury. Then again, Lucas had nothing to be ashamed of so it made my heart break a little when he felt he needed to hide how bad his injury was from Ellie. He received the injury being a hero, rescuing someone in need. What I liked so much about Ellie was her determination to move forward with her life and put the past behind her by finding happiness with Lucas. While with Lucas, I liked how protective he was of Ellie and that he could be every bit as dangerous now as he could be before he lost part of his leg.
Overall, Ms. Rylon never ceases to amaze me when it comes to writing heroes that aren’t afraid to release their dominant side in and out of the bedroom. This book is one that I’ll definitely be re-reading, and I would recommend it to fans that love a story where both the characters back stories ride an edge of darkness, but by facing their past helps to make them all the much stronger in the end.
Sensuality Rating: Explicit
Overall Rating:

BLURB:
Attraction, fear, danger—an unlikely recipe for healing scars.
In the year since Ellie escaped The Scientist’s ghastly dungeon, she still can’t stop looking over her shoulder. Or stop feeling guilty over the man who sacrificed so much to save her. He lost everything. His career, his aspirations—even part of his body. It’s no wonder he wants nothing to do with her. Too bad he’s the only man she can think about.
Lucas has vowed to stay away from Ellie, but not for the reason she thinks. The woman he craves doesn’t need to waste her life taking care of a man with a missing leg, not when she needs to focus on her own healing.
Despite the best matchmaking attempts of the Men in Blue—and their wives—the emotional and physical gap between them seems uncrossable. Until Ellie is threatened again, and the only choice is to work together until she’s safe.
But to stay in the land of the living, they’ll both have to fight through their pain—and relive a few nightmares—to guarantee their demons won’t destroy her future.
Warning: Contains an alpha male with a broken body, but whose best bits are in fine working order. And a woman who survived hell, and is determined to fit enough of their jagged edges together to make a whole. Vivid PTSD flashbacks of sexual violence could be disturbing for some readers.
at 20:09