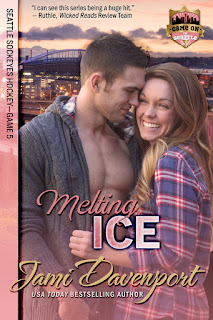 Being traded from yet another hockey team, which will make it his fourth team in less than a year, Isaac Wolfe knows this is his last chance if he wants to remain in the game that he loves. Joining the Seattle Sockeyes, his teammates don’t particularly like him. But then, a chance encounter with  Avery, the blonde beauty  living on the property next door to where he’s just moved into starts to change his ‘ice cold’ attitude.


Avery Maxwell is definitely feeling how disappointed her sister is of her choice to quit college in order to pursue her riding career. However, she’s not going to change her mind for anyone. Determined to prove herself, she doesn’t need the distraction that Isaac Wolfe – the Seattle Sockeyes newest team member – offers. Until she starts to see that being around him helps her to relax and produce better results in her riding.
At first, the introduction of the hero had me wanting to bake him a cake and throw him a pity party for one. But the more I read; I actually began to really like him, especially once he met the heroine. The plot was good, although I thought it started off a little slow. But I’m glad I held in and kept reading as the secondary characters totally contributed to my enjoying this story as much as I did. The dialogue is interesting, especially between Avery and her twin sister, Emma. They’re as different as night and day that you wonder how they can be twins, but at the same time there’s no one better than her sister to help her sort through the feelings she begins to have for Isaac. Then there’s Isaac and how he begins interacting with his teammates. His budding friendship with Blake almost helps to mellow him out a bit more on top of what his relationship with Avery does.
As for the sex scenes, the chemistry between Avery and Isaac definitely explodes onto the pages really well, but I thought the first sex scene and then no romance for a while definitely stalled the story. It was almost as if Isaac saw Avery as a toy that he could put away in a toy box until the next time he wanted to play. Luckily, he came to his senses and realized their growing attraction was worth fighting for because Isaac definitely needed Avery in his life. What I liked so much about both characters was that despite everyone in their lives trying to keep them apart, that they didn’t heed the warnings as their love definitely changed them both for the better.
Overall, I did enjoy this novel and I’m going to keep an eye out for Blake’s story as I really hope he gets a happy ever after of his own as he certainly deserves one.
Sensuality Rating: Very Sensual