About the Author
Originally from Long Island, New York, Shelly Laurenston has resigned herself to West Coast living, which involves healthy food, mostly sunny days, and lots of guys not wearing shirts when they really should. Shelly is also the New York Times bestselling author G.A. Aiken, creator of the Dragon Kin series. For more info about Shelly’s books go to www.shellylaurenston.com. Or to check out G.A.’s dangerously and arrogantly sexy dragons go to www.gaaiken.com 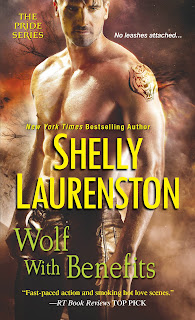 
BLURB:
There’s nothing like a good ol’ boy wolf.  And ace security expert Ricky Lee Reed serves, protects and seduces with all the right moves…
Sure, Toni Jean-Louis Parker has to be the responsible oldest sister to a crazy-brilliant clan of jackal siblings. But now she’s cutting loose for some hot, sweaty, no-commitments fun—and the sexy, slow-talking, swift-moving predator assigned to keep her family safe is just the right thing to shapeshift her love life into overdrive. Trouble is, he’s starting to get all obsessive wolf on her every time he looks in her direction…
Getting serious about anyone isn’t in Ricky Lee Reed’s plans. Hell, even now he doesn’t really have a plan—outside of catching whoever is threatening this dangerously brilliant family. But the more he sees of Toni, the more he’s howling for her. And whatever it takes to convince her that what they have is everything, well, this wily wolf is down for the sizzling chase…


Buy Links:  Amazon | B & N | iTunes | Kobo | Publisher
EXCERPT:
The wolf placed Toni’s butt on the stainless steel kitchen island so that she was sitting up. “So what hurts the worst?” he asked.
“Shoulder.”
“That’s what I thought. Because it’s not really in its socket.”
Toni sighed. “Great.”
“The dog is doing well, though,” one of the wild dogs pointed out.
“And that’s what’s important!” Jackie cheered, but when both her children gawked at her again, she quickly added, “You’re a hero! My daughter, the hero!”
A blond female wild dog pushed her way closer through the other dogs until she stood in front of Toni.“Wolf is right,” she said in a thick Russian accent, “about this shoulder. But we can fix. Hold her, wolf.”
“Now wait a—” Toni protested.
The wolf scrambled up behind her, both legs around her hips, hanging well past her own long legs, and his arms around her waist, holding her tight.
“Got her!” he announced
The wild dog pulled her fist back. “I make this quick, jackal.”
“Hey! I don’t want you—owwwwwwwwwwwwww! You Russian cow!”
“See?” the Russian noted. “She’s better already. Who knew jackals were so tough?”
Coop leaned in, her brother cringing in sympathy. “Are you okay?”
“No!” Toni snarled.
“Make her sling,” the Russian ordered the others. She looked at Toni. “You’ll be fine tomorrow. I’m impressed you don’t cry like sniveling cat.”
“It’s not that I don’t want to.”
“All that matters is that you don’t. I loathe weakness. Like I loathe cats.” Then without another word, the wild dog walked out of the room.
“I’m weirdly freaked out,” Coop muttered, “and turned on all at the same time.”
Toni nodded. “I know.” Glancing down, Toni said, “Why are you still holding me?” she asked the wolf.
“I’m giving you my invaluable support, and my immense charm.”
“More like your immense bullshit.”
“Now, now, darlin’,” he teased, annoying her more. “No need to get so nasty just because you’re confused by your feelings for me.”
“I do not have feelings for you, other than pity for your mental illness.”
The wolf laughed while Coop suddenly raised his brows at her, and Toni shook her head at her brother. Tragically, she recognized that expression. Recognized it all too well.
“Don’t even—” Toni began.
“I’m Cooper,” Coop announced to the wolf, grinning at him. “The younger brother. Brother. Not boyfriend.”
Horrified, Toni snapped, “Cooper, stop it!”
“How y’all doin’? I’m Ricky Lee Reed. So glad you’re her brother. I’d hate to have to fight you for her.”
“No worries there,” Coop volunteered. “My big sis is very single and not even thirty yet.”
“That is nice to hear.”
“And you already seem to know my very single sister.”
“I will kill you,” Toni warned. “I’m not afraid to.”
“I’m glad to know she’s single,” the wolf said, “but she’s playing hard to get while stalking me all at the same time.”
“I am not stalking you.”
“I feel like a little ol’ gazelle calf without its momma.”
Toni’s eyes crossed at that pathetic visual.
“Are you interested?” her idiot brother asked. “Because as I said, she’s very single, but she only deserves the best. I won’t hand her off to just anybody.”
“Hand me off . . . what is wrong with you?” Toni demanded of her sibling.
“I’m trying to help.”
“I don’t need help.”
“I tried to chat her up,” the wolf explained, “but she used y’all’s other siblings to confuse me.”
“Oh, the ‘are you my daddy’ move? Yeah. She’s been using that one for years.’
“You both are aware that I’m sitting here, right? In front of you?”
“She had a bad breakup,” Coop went on. “About a year ago. I was hoping she’d get over it sooner.”
“I can help with that.”
“That’s what I thought. I’ve had a few She-lion benefactors over the years, and they all say that wolves are great for that sort of thing. The casual hook-up, I mean.”
Toni looked around the kitchen. “Am I dreaming? Tell me I’m dreaming this conversation.”
“We’re real good for that until we find mates of our own,” the wolf explained.
“See, that’s what I’m thinking. Because her ex . . . not worth all this angst. Our father, who is a really great guy, still calls that man the ‘pimple on the cock of humanity.’ ”
“Fathers love me. I’ve got this winning smile.” And Toni didn’t have to turn around to know the wolf was showing that smile to her idiot brother. “Perfect Southern manners. I never cuss. I rarely get sloppy drunk and that’s only around my Pack if I do. And I treat my momma right at all times, and not just ’cause I’m afraid of her. Even though I kind of am.”
“That’s perfect.”
“Would you two stop it!” Toni, to her horror, started laughing, hating both males for making it happen. “I’m not looking for a boyfriend.”
“Not a boyfriend, darlin’. A hook-up.”
“I don’t need that, either from you or anyone else.”

“But—”
“Shut up, Cooper!”
The males fell silent for a few moments until the wolf noted, “You do seem tense, though.”

Toni’s brother, tall and lanky, stepped away from his sister.
“You know what?”
“Cooper,” the She-jackal practically hissed. “Don’t you dare.”
“I should check on the kids. They’re probably worried.”

“About what? I’m sure they’re blissfully unaware anything has happened.”
“No, no. They could be very concerned. Yeah. I better check.”
“I’ll go with you,” she said, and tried to slip out of his arms, but Ricky had a real good grip on her and no intention of letting her go. He was just too damn comfortable.“Absolutely not! You need that sling the wild dogs are getting you.”
“A sling? We can make a sling at home.”
“You’re right! I’ll go get you one!” Then the jackal took off, leaving his sister all alone.
Yep. Ricky liked that boy.
“This is a nightmare.”
“Now, now. Don’t be hard on him. He only cares.”
“By handing me off to a wolf he doesn’t even know?”
“He probably has a good sense of things. Besides . . . my charm speaks volumes.”
“Your charm makes me want to punch you in the nose.”
That made Ricky chuckle. “I’m not trying to piss you off, darlin’. Just trying to get you to give me a chance.”
“Why?” she had to ask. “I’m really not that interesting. I’m cute but not stunning. I’m not excessively tall. And sexually, I’m rather vanilla. So then what is it?”
Ricky decided to be honest with her. “I like your hair.”
She suddenly went tense. “You don’t have to be mean.”
“I’m not. I like the curls. If we have sex, can I play with them?”
“I don’t even know how to respond to that.”
“Just say yes and I’m in.”
She shook her head. “Look, I really have to go. I have an interview in a few hours.”
“You need a sling and someone needs to keep an eye on you to make sure you don’t get the fever.”
“From a thrown-out shoulder?”
“It could happen. My brother got the fever last night. But that was from the crushed jaw and nicked artery. He’s probably still passed out at the hotel.”
“If your brother got the fever, why are you here?”
“I had to escape. My sister wanted to talk to me.”
“Good God,” she said flatly. “What was she thinking?”
Ricky heard the sarcasm but chose to ignore it. “Exactly! What was she thinking?”
Toni tried to move away again, but Ricky held her a little tighter.
“I’ll make you a deal,” he promised. “We hang out together today so I can make sure you’re really all right. And if we get along . . . you go out with me.”
“For sex?”
“Hopefully, but I was thinking dinner to start.”
“And if we don’t get along?”
“You can hit me in the nose if you’re still inclined.”
Toni gave a little snort. “Something tells me I will be.”