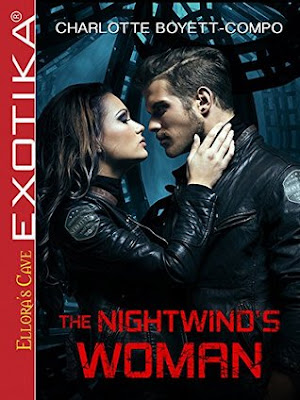 In The Nightwind's Woman by Charlotte Boyett-Compo, Kenzie Delaney is torn between two men. She's the Blood-Mate of archdemon, Kerreyder Abaddon, and the life-mate of incubus, Randon Kayle. Neither are interested in sharing her, and choosing between them isn't an option. Not when the man she's been sharing intense erotic dreams with, will likely be the one that'll lose. Since the other man has more, of a right to claim her. But when all hell breaks loose, their differences will need to be pushed aside, if they're to stop the person determined to use her as a pawn, for nefarious purposes.
The plot was exciting, fast-paced, and I loved how it started with Kenzie being offered a job, which was a once-in-a-lifetime opportunity. So much happens throughout this story, and each of the three characters face some tough challenges. But the resolution of their conflicts was great, as it bought the two men closer together.

I loved the dialogue. It's intense, and a real-page turner as someone from Kerreyder's past targets the heroine. There's also the fact that Kenzie and Randon already share a bond, so when they finally come face-to-face, it strengthens. Yet, the moment Kerreyder comes into the story, it's goes into testosterone overload, as Randon struggles to deal with the fact that Kenzie has two mates. I'm glad he didn't do anything too stupid that forced Kerreyder to follow through with his threats. Furthermore, there are moments where Randon's fellow Nightwinds tease him, which made me smile or laugh.

I enjoyed all three main characters, as well as the secondary ones. Kerreyder and Randon both had rough pasts, which has shaped them into the hardened men they are. Kerreyder is quite arrogant, while Randon is very gruff. Traits which serve them well when it comes to bringing to justice, or eliminating a paranormal when there's been any wrong doing. While Kenzie, she's smart, determined to prove herself to her new employers, and I liked that she took a chance by accepting the position she was offered. It changed her life for the better, despite all that she goes through.

Explicitly-detailed and scorching sex scenes spilled over onto the pages perfectly, and illustrated the strong chemistry Kenzie had with both men really well. Kerreyder and Randon are lucky to have found her when they did. Sharing her in the end doesn't seem, so bad to either man after what the three endure throughout this story.

Overall, this was another very enjoyable read by this author, of which I loved what one of the secondary characters did to the antagonist. It was a nice display of power, and necessary to ensure Kenzie's future safety. I would recommend this, if you love strong heroes that will do anything, for the one they love.

BOOK INFO:
Publication Date: September 5th, 2014 / Ellora Cave
Part of the WindWorld series. The archdemon Kerreyder Abbadon will fight to have Kenzie Delaney. All he needs to do is take her from the Nightwind incubus Randon Kayle. Nightwinds are not the sharing kind, but when it comes to Blood-mates-and that is what Kenzie is to Kerreyder-the ancient concept takes precedence over the mere life-mate designation that is the Nightwind's claim to Kenzie.
In order to have the female at all, the incubi will have no choice but to share her, else lose her completely. When two demons fight for the love of a mortal woman, all hell will break loose, and when the Seal is broken, unimaginable evil will pour forth. It will take both demons to stop it before mankind is annihilated.
at 23:24