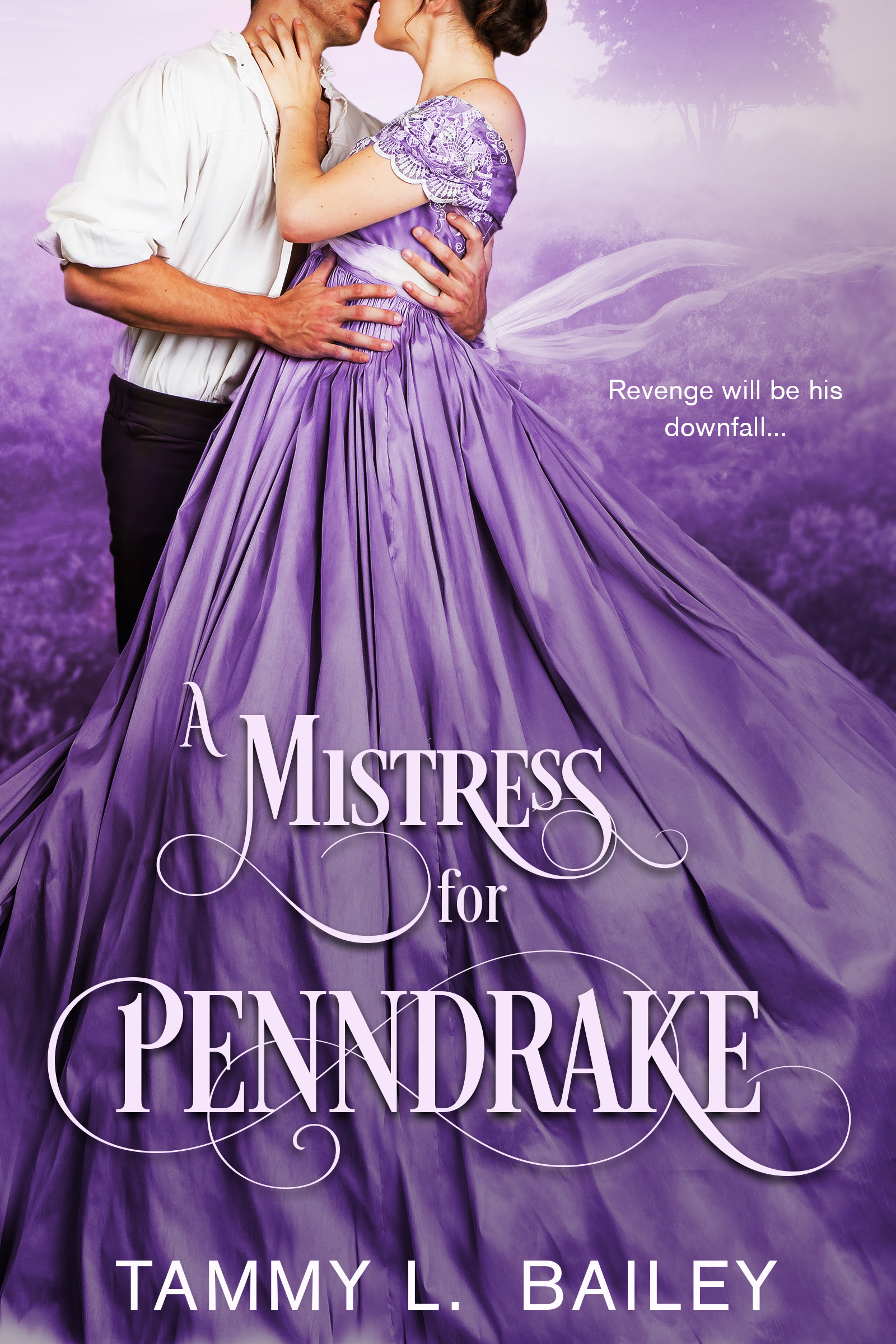 The Marquess of Wesley is out for blood. For a year, Lord Wesley has tried to undo the devastation his father left to Penndrake, their ancestral home, only to discover the man gambled it away right before his death. Now Wesley is being blackmailed by the new owner into marrying a woman he’s never met in order to get it back. But his intentions are less than honorable…

At one and twenty, Miss Kate Holden intends to become a governess, having sworn off all men years ago. However, her plans are halted when she receives a daunting letter from her cousin about a Lord Wesley. Ignorant of the name, and the devilish marquess that wears it all too well, she nearly ends up compromised. Refusing to fall prey to Wesley’s skillful seduction, Kate decides to turn things around on the rake. But the high-stakes game between them soon leads to her losing the last thing she expected…her heart.

In A Mistress for Penndrake by Tammy L. Bailey, Miss Kate Holden isn't about to fall prey to any man ever again after having her heart broken years ago. However, when she meets the Marquess of Wesley, there's no denying her attraction, even though she's been warned to stay away from him. Will Kate fall for the gorgeous lord's charms or will their shot at happy ever after never happen?

This is the first book I've read by Ms. Bailey, but it's certainly not going to be my last. Really, the way this story started drew me in immediately because the heroine is very much like Cinderella with her family always making her do something that they should be perfectly capable of doing but expect someone else to do for them. However, the hero is certainly not her prince in the moment they meet. Instead, they see each other as the enemy in the way he sees Kate as someone he can use against her cousin while she's determined to listen to her cousin's warning, which is evident in how she interacts with him in the beginning.

As for the dialogue, it was intense due to the main characters back stories, as this book encompasses the enemy to lovers and revenge tropes. Will the hero be willing to use the heroine to get revenge once he gets to know her? Will the heroine figure out the hero's motives before she gets hurt? Moreover, the heroine is resilient, feisty whenever she's around the hero and I liked how determined she was to resist the hero, even though resisting him wasn't easy because he was so confident and charming. I also liked how the hero stood up for the heroine when it came to her family and they're expecting her to fall in line with whatever they want her to do. Why can't they take care of things for themselves instead of always expecting the heroine to do such menial tasks like they ask of her?

While the hero, I could understand why he wants revenge after what he learns about his father and what the man did. Furthermore, I liked how far he was willing to go to get his revenge and the fact that the heroine didn't make things easy for him. Certainly, she provides him quite the challenge right from the moment they meet. Yet, what I liked most of all about the hero is that he didn't give up on trying to win the heroine over. Surely she wouldn't be able to resist his charm forever.

Overall, Ms. Bailey has delivered an utterly fantastic historical romance in this book where the chemistry between this couple was intense; the romance sweet, heartwarming and had me loving every interaction between this couple; and the ending had me liking the heroine's determination to push the hero to admit how he really feels instead of throwing their chance at forever away. I would recommend A Mistress for Penndrake, if you enjoy historical romance, the revenge trope, the enemy to lovers trope or books by authors Stacy Reid, Darcy Burke, Eva Devon and Jess Michaels.

Time had barely passed before she was torn awake by another dream. She screamed and then felt a masculine hand pressed hard over her mouth. Panic knotted her stomach and caused her heart to slam into her chest. She grasped the man’s fingers and writhed her body against a half-naked form when the familiar voice of Lord Wesley caused her to freeze in place.
“Be still, Miss Holden,” he warned. “I’m fairly certain you do not wish to wake up as my wife.”
Unsure how he came to be in her room or why, she clamped her teeth into his calloused flesh. He yanked his hand away and swallowed a few curse words, squinting into the dimness to examine the damage.
“By God, woman!” he hissed.
“Kate, are you all right in there? I heard a scream.”
Kate opened her mouth to answer when Lord Wesley clasped her bare arms to bring her close enough to hear him. “Tell your young cousin you’re fine. That…you just saw a mouse.”
Despite the dizzying circumstances, Kate leaned forward and whispered against his throat, “But I’m not afraid of mice.”
The door handle rattled, and she drew up against him. Did she think her petite form could block his muscular one?
“I’m fine, Lilly. I just…saw a mouse,” Kate croaked.
“But you aren’t afraid of mice.”
Kate clicked her tongue and then sent him a sidelong glance. “It was a very…large mouse.”
“Oh,” came the quiet voice on the other side of the door. “Well, as long as you’re all right.”
They waited a moment before hearing soft footfalls move away from the door.
“Now, you will tell me, Miss Holden, why you felt compelled to scream my name?”
Kate straightened, balking at his words. “I did no such thing,” she said. Inches away, his gaze, molten and reflective, slid across her barely clad form. Fire swirled from her belly to her face as a chilled wisp of air rubbed against her veiled breast.
“Why are you here?” she asked, reaching for a blanket to cover herself.
He sat up and bent his head toward the floor, using the quiet moment to rake the hand she’d injured down the length of his face. He exhaled and then turned back to her, his features chiseled into impatient lines.
She let out a quick breath at his nearness and the way the light from a nearby candle licked over the corded muscles of his chest and abdomen.
“Do you deny calling my name, Miss Holden?”
She shook her head. “What? Why on earth would I do such a thing?”
“Exactly, and yet I was thrust awake to my name on your lips. Not once, but twice.”
Kate started to deny his words when the vivid images of her dream broke through her memory. She saw Arthur laughing and Lord Wesley watching as she tried to save herself from two fire-breathing dragons. In the middle of the battle she knew she couldn’t win, she tried to yell, only to hear nothing but silence. She waited for someone to help her, waiting until she propelled herself up and awake.
“Miss Holden?”
Kate winced, more so from the episode she’d caused than his emphatic tone. “I had…a bad dream, that is all.”
“I thought you were hurt…or dying,” he said, his tone angry and void of empathy, as if the whole reason she was at Penndrake was her fault.
Kate didn’t know what to think. He’d shown himself to her room to save her from an unknown death and appeared out of sorts that he’d found her well.
“If it makes you feel any better, I was crushed by two fierce creatures, much like the ones on the crest in your study. I suppose out of desperation, I may have attempted to call your name.”
He cocked one dark eyebrow at her. “At last, a confession,” he murmured. “So, did I rescue you again, Miss Holden, this time from fire instead of rain?”
She shrugged. “No. While I awaited my death, you stood there, devouring some piece of forbidden fruit like a ravished street urchin.”
He chuckled. “How brave you must have been.”
She didn’t answer him for a long moment, contented to have them affable toward each other.
“I suppose, then, I am more gallant in real life than in
your dreams?” he teased her.
She shook her head. “How is it that you have found a way to wreak havoc when I’m both asleep and awake?” she asked.
He smiled and tugged the blanket higher to her chin. He leaned closer, and she held her breath, waiting for him to kiss her, to pull the blanket away and caress every place the air touched.
Instead, he bent his mouth to her ear. “Miss Holden,” he said, his voice deep and husky, “you do not realize what truth you speak, for the both of us.” But before she could ask him to explain what he meant, he stood and glanced down at her.
“You can’t possibly know the restraint I have shown regarding you,” he breathed, ragged and hoarse. “Soon,” he added and turned toward the door.

Tammy began writing when the shows and movies she watched didn't end the way she wanted them to end. Whether it's historical or contemporary, for her, there must always be a happy ending. When she's not writing, she's spending time with her husband and two boys near Cleveland, Ohio. Without their sacrifice and understanding, she believes she would have never been able to pursue her passion for writing or her accomplishment of becoming a published author.