REVIEW: PROTECTED BY A SEAL by CAT JOHNSON 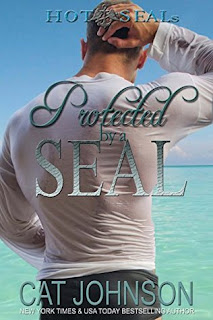 Forced to retire from his life as a Seal after suffering an injury during a training exercise, Rick Mann is just now starting to realize how boring his life truly is. No longer is there the adrenaline rush that his military life provided. When a job to protect actress Sierra Cox becomes available with Guardian Angel Protection Services (GAPS), the agency his ex-teammates have formed, he takes it without hesitation. Desperately needing the action the job will hopefully offer.
Receiving fan mail is something every actress is used to, but the harrowing letter Sierra discovers inside her trailer has her spooked, especially when she spies the photos and the message that goes along with them.   When her manager, Roger, suggests hiring a bodyguard to watch over her, she's adamant against the idea. But he won't take no for answer, believing she needs to be protected at all costs.

Spellbinding is a word that comes to mind when describing this book as the plot weaves a spell with every page. The twist towards the end with Rick didn't surprise me, but no way did it deter me from finishing this book. Rick and Sierra are a wonderful couple, whether they're teasing each other or trading insults. In fact, their banter made for very interesting dialogue. I couldn't help but laugh at some of the things she thought the acronym GAPS stood for.

The sexual tension between the pair was intense from the moment they met and grows until you're ready for these two to give in to their strong attraction. Thankfully, it happens through some rather hot sex scenes that will have you hoping for more as the sex doesn't get their need for each other out of their systems. What I liked so much about both characters was how comfortable they became with each other so quickly. It made it so much easier for Rick to guard her, even when she was arguing that his protection wasn't necessary at first. That there were other ways, in which she could protect herself.
Honestly, what more could you ask for in a book. Protected by a Seal had everything a fan of romantic suspense could want. A hot Seal, a stubborn heroine, a fast-paced plot, suspense that grabs your attention from start to finish as well as the added bonus of a hot romance.

This was another great addition to this series by Ms. Johnson. As with all of the books, this one can be read as a stand-alone. I would recommend it to fans of books where the hero is an ex-military man looking for some action in more ways than one and a heroine not afraid to speak her mind.  Or even if you're looking to start reading romantic suspense, this is the book for you.
Sensuality Rating: Very Sensual
Overall Rating:


As a Navy SEAL, Rick Mann fought his way to hell and back, but he's never faced a challenge quite like protecting the rich and famous actress Sierra Cox. She's spoiled, she's annoying and he's never wanted a woman more. That's a problem for so many reasons. At the top of that list is that he needs to keep his head in the game because even though Sierra doesn't take Rick seriously, the threats on her life are very real.
at 18:29