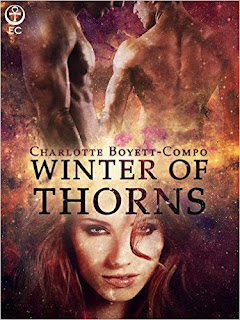 Marrying someone his prince has not approved of him to wed isn’t one of Lord Seyzon Montyne’s best plans, especially when his prince tends to punish those that go against his decree. However, what’s done is done until the prince arrives right as the ceremony is coming to an end and declares that Seyzon is to be sent to the dungeon on his wedding night for disobeying orders. But that’s not the worst of it. It seems the prince is determined to have his beautiful wife, Lady Jana Reynaud, by enforcing an ancient and legal right to do so.


Do you want to know something? This is the first Sci-Fi Romance I’ve ever read and I enjoyed it very much, considering the story was one where emotions run high and the hero and heroine face many obstacles before they achieve their happy ever after. The plot captivated my attention from the very beginning when Lady Jana comes to Lord Seyzon’s rescue and brings him back to health. It seems the phrase love at first sight really does exist. As for the dialogue, it was actually quite heartbreaking at times as the prince does his best to keep Jana and Seyzon apart. But for the moments they were together, I couldn’t help feel anything except rejoiced.


The sex scenes are quite explicit and you really feel for the heroine as she has no choice but to accept the prince’s right to a night in her bed. The worst thing is, she doesn’t want to enjoy it but finds herself unable to resist the fact that the prince gave her great satisfaction. However, in saying that, the love that Jana and Seyzon shared was so much stronger and their passion spilled over onto the pages perfectly to add incredible spice to the story.
Overall, this was a great book to introduce me to the Sci-Fi genre. There are so many plot twists that kept this reader totally absorbed in the story, but none more so than when the familial connection that exists between the prince and the lord was revealed. I would recommend it to fans of the Sci-Fi genre, but be warned; you may need some tissues close by just in case.
Sensuality Rating: Explicit

BLURB:
Growing up together since childhood, Lord Seyzon Montyne and Prince Vindan Brell had shared everything, but if Seyzon had what Vindan wanted, the young prince would take it, break it, then toss it away.
Some things never change. Now grown men, Seyzon has something Vindan desires more than anything—Seyzon’s beautiful bride, Lady Jana Reynaud. Locked in a dungeon on his wedding night, Seyzon must stand by helplessly as Vindan once again gets his way and takes Seyzon’s woman away with him. But no matter how much Vindan enjoys Jana’s body, he cannot win her heart.
What happens when a warrior’s woman becomes the property of another man? Friendship becomes a thing of the past and all hell breaks loose!
Reader Advisory: This story has graphic sexual language and scenes—no closed bedroom doors (or other rooms) here!
at 20:01