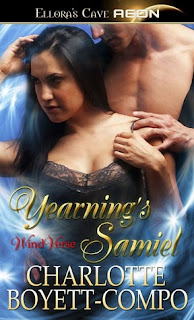 Finally escaping the hell-hole prison he was sentenced to, for a crime he didn't commit, Kaizen Samiel has been making those responsible pay, for their role in him being wrongfully accused. Intercepting the scout ship the woman he's always loved captains, determined to learn if she played a part in betraying him, he finds himself tempted by her all over again.
Discovering the truth that the man she's always loved is still alive, comes as quite a shock to Captain Kathleen McGregor, when he intercepts her scout ship and kidnaps her. Since for so many years, she's held a secret -- their son. Determined for him not to learn the truth until she thinks he's ready, she does her best to lie. Yet, secrets have a way of being exposed, and if she's not careful, it could ruin their second chance at a future.
There was so much to enjoy about this story. The fast-paced plot, the angst-ridden dialogue of the hero as well as the couple of twists that surfaced throughout the book. I absolutely loved the opening chapter where Kaizen and his crew intercept Kathleen's ship and she discovers that he's still alive. Her shock that he wasn't dead as she assumed came through loud and clear as to did the hero's suffering at the hands of his tormentors. In fact, that side of the dialogue was what I loved so much about this story. There's no way you can't help, but feel anything except empathy, for both the hero and heroine. His imprisonment turned both their lives upside down.
The secondary characters bring their own uniqueness to the story, since the person responsible for Kaizen's imprisonment, is someone Kathleen wouldn't have suspected, until Kaizen reveals certain facts that he knows about the antagonist. As for the sex scenes, they heat up the pages at the right moments and illustrate the fact that Kathleen and Kaizen are making up for lost time.  What I liked so much about both characters was their determination to find the truth, so they could finally have the future they'd planned before he was imprisoned.
Again, Ms. Boyett-Compo has proven she can pen an entertaining Sci-Fi novel that leaves a reader loving the main characters and wanting to read the next installment of this series.
Sensuality Rating: Explicit
Overall Rating:

BLURB:
Wrongly convicted of high treason, Kaizen Samiel has everything taken from him—his career, his freedom and the woman who is the center of his Megaverse. Condemned to a hell-hole prison in the frigid darkness of space, all he wants is revenge on the men who had him sent there and the woman who has forsaken him.

When Capt. Kathleen McGregor’s scout ship is attacked, the last face she expects to see on her vid-com screen is that of a man she’s thought long dead. She has kept her love for Kaizen safely ensconced in her heart where no one can take him from her. Now, looking into his beloved face and seeing only hatred, vengeance and retaliation aimed directly at her turns her world upside down.
at 16:24