REVIEW: THE ALL-STAR ANTES UP BY NANCY HERKNESS 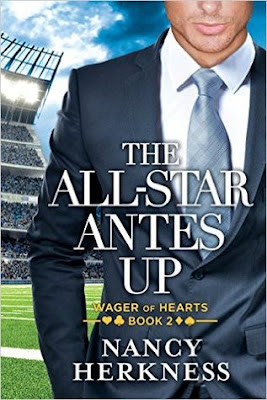 The All-Star Antes Up
Wager of Hearts #2
By: Nancy Herkness
Released May 31st, 2016
Montlake Romance
+ Add to Goodreads

In The All-Star Antes Up (Wager of Hearts #2) by Nancy Herkness, it's always been said that opposites attract, and that's certainly the case the moment Luke Archer and Miranda Tate meet. However, Luke is a man that doesn't do commitment, and Miranda doesn't have time for a man in her life. Not when she works as hard as she does to help out her brother. However, the more time Luke and Miranda spend together, the more Luke begins to realize that he doesn't want to keep having meaningless sex with those women that only want him because he's the quarterback for the New York Empire. Can he convince Miranda to give him a chance at forever love?
Although I haven't read the first book of this series, this story can easily be read as a stand-alone. The prologue opens this story brilliantly with the men Luke makes a wager with. Will he succeed in finding the one woman that will get him to settle down? However, it was from the moment when the hero and heroine met where this story really drew me in. Luke's brother is a jerk and I felt sorry for the hero in having to deal with him and the fact that he put Miranda into a difficult situation with her boss who she clearly doesn't like. It made for interesting reading. Would Luke be able to smooth things over for Miranda?

Both the main characters entertained me from start to finish with their back stories, their growing relationship and the obstacles these two face on their journey to happy ever after, which there are a lot. Such as Miranda misjudging Luke, their fear of relationships, and a spiteful man that loves to throw the weight of his power as boss around. As for the heroine, she's strong, brave, hard-working and I loved that she would do anything for her family. But what I liked most of all about the heroine was how much of a challenge she provided the hero. He's not used to women that don't give him the time of day and I liked that Luke had to work hard to get her attention. Because both deserved to be happy, and there is a lot of chemistry between them that deserves to be explored, and once it is, spills over onto the pages in hot, nicely-detailed sex scenes that do this couple's strong chemistry justice.

While the hero, he has big decisions to make throughout this story concerning his career, Miranda and his brother. How can he stop his brother from making the biggest mistake of his life? What will he do about his brother when it comes to the trouble he causes for Miranda? How can he convince Miranda to give him a chance? And if she does, can he find a way to make her happy or will his career get in the way? Will he help Miranda when it comes to her job? Moreover, Luke is kind and caring and I liked how he helps the heroine through a tough moment in her life and makes it easier for her to deal with what's happening with her family.

Overall, Ms. Herkness has penned a really good read in this book, which has me looking forward to the next book of this series to discover more about secondary character, Gavin Miller. The way this story ended proved that Luke wouldn't give up on winning Miranda back, even if it meant declaring his love with a huge romantic gesture; a gesture that gridiron fans across the country witness. However, it was the epilogue that wrapped this story up wonderfully, because it shows how far Luke has come and that anything is possible, especially when he was so against relationships. I would recommend The All-Star Antes Up by Nancy Herkness, if you enjoy the opposites attract trope.

BLURB:
“No strings, no rings.” That’s Luke Archer’s motto. As the champion quarterback for the New York Empire—not to mention a self-made billionaire—Luke has given up on serious relationships. Women only want him for one thing: the thrill of being with a superstar. And he likes it that way too. But when his best friend announces he’s retiring from football to spend time with his wife and kids, Luke feels like he’s missing out on something much bigger than his career.
The assistant concierge in Luke’s luxury high-rise, Miranda Tate fled her family’s dairy farm to come to the bright lights of New York City. She works hard to move up and sends her spare earnings home to her brother. When she and Luke meet, there’s an instant sexual attraction which turns steamy quickly, but they’re in completely different leagues. Could Miranda be just the woman Luke needs to win the most important game of his life?
BUY LINK: Amazon