REVIEW: MARK TO HER HEART by ASHLEA RHODES 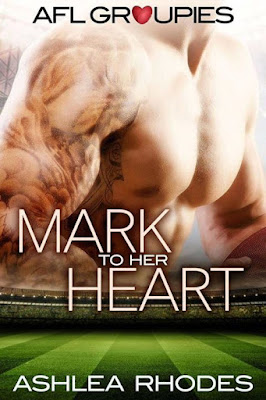 In Mark to her Heart (AFL Groupies #1) by Ashlea Rhodes, Maxine loves her job as a disability carer, jus as much as she loves the game of AFL. Meeting the captain of the Blues after a game is a memorable experience, especially with how their night progresses. Except her feelings for Mark have her running scared, and unless she can figure out what she wants, then she has no hope of happy ever after. Is she brave enough to give Mark a chance, or will she let the love-of-a-lifetime slip away?

Mark never thought he'd find a woman he'd want to spend the rest of his life with, but one night with Maxine has left him thinking about not much else since. Too bad she didn't stick around long enough to realize that what they could have had could last forever. Still, he isn't about to give up on finding her again. The only thing is, once he does find her, can he convince her to give him a chance?

Being someone that has read every single book by Ms. Rhodes since she released her first story, I've got to say that her writing just keeps getting better and better. The prologue begins this story wonderfully by introducing readers to the heroine, Maxine, and her love for AFL. However, it was from the moment that Mark and Maxine meet that drew me into  this story completely, determined to know what obstacles these two would have to face on their journey to happy ever after. Yet, in saying that, I just wished that Ms. Rhodes would have had the main characters interacting a bit more than they did and answered questions left unanswered such as Mark learning the real reason why Maxine was running scared from giving them a chance.

As for the dialogue, it flowed really well and Mark had me hooked with the decisions he has to make. Should he continue his career and continue to feel pressured by his father's expectations, or should he follow his heart by making a career change? Should he continue to find Maxine when it seems she doesn't want to be found? Moreover, I liked the teasing banter between Mark, his brother and the hero's friend, Aaron. Mark and his brother, Jackson, are complete opposites in the way Jackson is a total player while Mark is sick of playing the field. He wants to settle down, and I could understand why he'd want the same for his friend, Aaron, who sounds like he is in a relationship that he desperately needs a way out of.

While Maxine, she's very independent, hard-working, and I could understand her reasons for not wanting to be hurt by a man that she could see herself spending forever with. Yet, at the same time, she left me a little frustrated with her. If she didn't face her fears, then she was going to be miserable for the rest of her life because no other man would compliment her more than Mark, no matter how hard she tried to forget about him. Why wouldn't she take the wonderful advice her friends were offering? However, in saying that, she did redeem herself in my eyes with what she does to win Mark back.

Overall, Ms. Rhodes has penned a really good first novel for her AFL Groupies series where the sex scenes were hot and illustrated that Mark and Maxine need each other to be completely happy in life, instead of just content with it. The way this story ended had me cheering for this couple, because Maxine had to go big to win Mark back and she does that with the help of the secondary characters. Yet, it was the epilogue that wrapped this story up nicely, because of the surprise Maxine had for Mark. I would recommend Marked to her Heart by Ashlea Rhodes, if you enjoy contemporary romance or stories where love can overcome any obstacle.

BLURB:
When Maxine’s not working as a disability carer, she’s at an AFL game. The sport she has grown up loving. One night after a game, she meets one of AFL’s most eligible bachelors—captain of the Blues. The tall, dark haired, grey eyed god is the sort of man she would usually stay far away from. But when he leads her out on the dance floor, she finds that's the one thing she can't do.


He’s funny and charming. A dangerous mix. A mix Maxine can't risk her heart on. After a night of passion unlike any she has ever known, Maxine runs. She hopes she can put it all behind her as a one-time event, but fate has other ideas in store. No matter how much you try you can't run from some things.
Mark has spent his whole life trying to be the best he can be and live up to his father’s expectations. Now he’s finally at the top of his game; if only his team could just win then maybe his father would be proud. But with power and leadership comes other things: groupies—those fake, power and money hungry women who would do anything to get their claws in a top player like himself.
When he was younger he was happy to take what they so willingly gave but now he’s over it all. He wants something real. Like he feels for Maxine. One glance at the woman has his body burning up. And now he’s found her, he plans on keeping her. Well, that was ‘til she slipped out of his apartment as he slept.
With only a first name to go on, Mark holds little hope of ever seeing the beautiful Maxine again. But maybe, just maybe, fate might help a man out. Finding her might be the easy part but keeping her may just be harder than marking the ball.