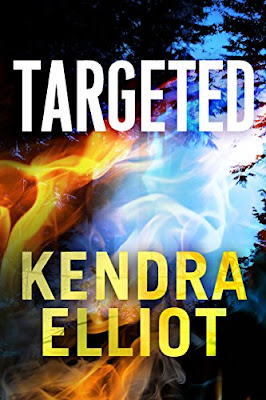 In Targeted (Calne #4) by Kendra Elliot, being assigned to investigate the murder of Denny Schefte, her fiance's boss, while they were on a fishing trip, Ava McLane knows she's got her hands full with figuring out the person responsible. Especially since Denny is a cop, and his murderer seems to be a serial killer targeting cops. As Ava investigates, she soon discovers there's more to the case than someone targeting cops, and if she doesn't find the killer soon than her fiance Mason could find himself in serious trouble when she learns the truth of why this killer is determined to end the lives of certain cops.
I have loved every book of this series, and I can't believe it's taken me so long to get the chance to read this one. From start to finish, this book was intense, fast-paced and a real page turner, because once the death of Mason's boss happens, I couldn't wait to discover who would be targeted next, as it was palpable that the killer would go after another person. Since the murder of Mason's boss just didn't make sense when it happened, not as a one-off murder.

As for the dialogue, it was well-written and entertained me from start to finish, as the both the main and secondary characters go through so much, and as a reader, I got to know more about Ava's partner. He's a good guy that loses his way for a little while, and I couldn't help but sympathize with his reason for what he does that causes Ava to worry about him. Then there's Mason and Ava. They're both riveting characters that never quit until a case is solved, no matter how long it takes for them to get their victims justice and the dialogue proves that. Every lead followed and every witness interviewed just made me want to read more, even though I had an inkling of who the killer was the moment they were introduced.


Ava is strong, brave and I liked how determined she is to find the killer. Nothing will stop her in making sure no one else dies, yet at the same time, I felt sorry for her. Her fear of losing Mason is understandable, and with his boss being a victim, who knew if he'd be a target too. While Mason, the loss of a good friend has knocked him for a loop, and it's understandable why he's so determined to help in the investigation in any way he can. I also loved the continuing relationship between Mason and Ava, because without each other they'd never be happy. They have such a strong bond, which has stood every test possible including a mentally-ill sister who only thinks about herself and doesn't seem to want to get better. Sometimes, I wish Ava would just give up on her.


Overall, this was a really good book where the chemistry between Mason and Ava blazes as hot as ever, and illustrates that there's no one else in the world they'd rather be with. The way this story ended had me on the edge-of-my-seat with what the main characters go through. Will both of them survive the harrowing moment where they face the killer? I would recommend Targeted by Kendra Elliot, if you love romantic suspense books that provide enough twists and turns to keep a reader flipping the pages the moment they start the book until they get to the end.
OVERALL RATING:

All Detective Mason Callahan wanted was a quiet fishing trip with the guys—a chance to get away and unwind before Halloween.
Until he finds the body of his boss, Denny Schefte, near their remote Oregon cabin. Now all he wants is to catch the sadist who slit Denny’s throat and covered his face with a mask. Mason was the last person to see him alive and will stop at nothing to find his friend’s murderer.
When the FBI learns of the mask left at the scene, they realize they have a serial killer on their hands—one who is targeting cops. They assign the case to Special Agent Ava McLane, despite her engagement to Mason. Barely recovered from her own nearly fatal injury and her sister’s attempted suicide, Ava hopes she is ready to chase another killer.
But as she delves into the increasingly disturbing case, the killer may be closer than expected—dangerously close.
BUY LINK:  Amazon