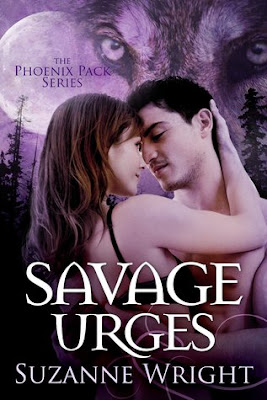 In Savage Urges (The Phoenix Pack #5) by Suzanne Wright, Makenna Wray loves to help people, especially people like her. Being a lone wolf isn't easy, and when she finds someone that is in desperate need of help in connecting with the Phoenix pack, she jumps at the chance. However, she wasn't prepared for Ryan Conner, the handsome enforcer for the pack, and soon she has to decide whether to give him a chance or whether to stay away, especially with the trouble she and her friends are facing against another Alpha who wants the shelter where she volunteers.
What a brilliant book Ms. Wright has penned in this story about a heroine that finds it hard to trust; a hero that will do anything to prove to her that there's a connection between them, even without the mate bond forming like it should; and a couple that face big trouble from a scary Alpha that wants what he can't have. The first sentence of this book made this story an intriguing, fast-paced read that had me hooked, because how is the heroine supposed to help someone that has come to her in the condition they have. However, it was the moment that she comes face-to-face with Ryan that things became interesting. Would he listen to her, or do to her what he suggests because he couldn't be bothered listening to anything she has to say since he sees everybody as a threat?

The dialogue and the plot were riveting, and I loved both the main characters and every moment that they conversed. Makenna doesn't find it easy to be around other shifters besides those that come to the shelter, but I liked that she gave the hero a chance. Makenna is strong, brave, kind, caring and I liked how she provided quite a challenge for the hero. No way will she be intimidated by anyone. Not after all she's been through to get to where she is in her life. While Ryan, he's confident, determined when it comes to the pack's safety and I loved how protective he was of Makenna. He proves through his words and actions -- whether it's in helping her or the teen she's brought to his pack's attention -- that she can trust him.

Overall, Ms. Wright has penned a wonderful read in this paranormal where the sex scenes were filled with lots of exquisite heat and passion that illustrated the strong chemistry these two had from the moment they met. Ryan is very alpha when it comes to physical intimacy, and he makes things very exciting for Makenna. The way this story ended had me cheering for this couple's happy ever after. Makenna is stubborn when it comes to being involved in what happens when it comes to defending the shelter where she volunteers, and it was hard not to fear for her and Ryan's safety. Moreover, what happened to one of the main characters towards the end was nerve-wracking. Would they be alright? However, it was the final chapter that I really enjoyed. Finally, Makenna gets some closure about her past and I liked how the hero and heroine could still tease each other after all the obstacles they had to overcome to be together. I would recommend Savage Urges by Suzanne Wright, if you enjoy paranormal romance where the hero is good at dirty talk and the sex is red hot.

BLURB:
She’s a lone wolf with a cause.
As a volunteer at a shelter for lone shifters—the same one that rescued her—Makenna Wray has dedicated her life to finding homes for its residents. And when she discovers that a teen in her care is related to Ryan Conner, the broody, handsome-as-sin enforcer of the Phoenix Pack, she’s eager to help connect the two. She just wasn’t prepared to feel a connection of her own.
Lone wolves are loners for a reason—and most of them bad. Or so Ryan assumes until he meets the mysterious Makenna. Quirky and sensual, she seems to enjoy riling him, especially when she refuses to discuss her past. Although there is no mating bond, he’s sure she’s the one. All he has to do is be patient and wait. But when another pack’s sinister Alpha comes sniffing around, threatening Makenna and her shelter, this enforcer is ready to let his wolf off the leash…
BUY LINK: Amazon