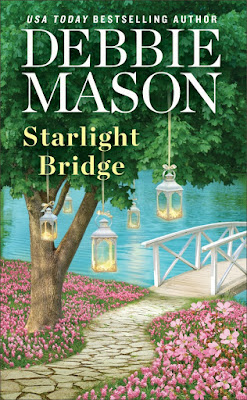 In Starlight Bridge (Harmony Bridge #2) by Debbie Mason, instead of telling the only man she's ever loved the secret she's kept hidden from everyone, Ava DiRossi asked for a divorce. Now years later, Griffin Gallagher is back in town. Determined to hide the truth for as long as she can, and make sure his great-grandmother's memoir doesn't fall into the wrong hands, Ava does her best to remain neutral to her ex. Except it's hard to ignore the chemistry that still blazes between them, no matter how hard she tries. Will she find it within herself to reveal her secret, so she and Griffin can have a second chance at love?
The first book of this series was really good, but I loved this one so much more. Right from the beginning, this story was a beguiling, fast-paced read that I could not put down and I loved the way it started with Ava needing a miracle; someone to help her get through the hard times she's had over the years dealing with her injured father. However, it was from the moment that Griffin and Ava came face-to-face for the first time in this story where things became very interesting. The heroine doesn't know how to act around Griffin, and it's palpable he doesn't want anything to do with her because of the way things ended between them. She didn't give him a good enough reason for the divorce.
As for the dialogue, it was intense due to the obstacles this couple face on their journey to happy ever after, what someone is trying to do to see that the Gallaghers sell Greystone Manor; and the main characters back stories, especially that of the heroine. She's been through so much in the years since divorcing Griffin and it made me feel sorry for her, because her dad is hard work always ordering her around and complaining; treating her like a servant instead of his daughter. However, I liked that she didn't let it break her, even when she had every reason to fall apart. Really, she's strong, brave and I liked how determined she was to move on with her life, once things started turning around for her and she could actually live her life the way she wanted.

While Griffin, he was a fantastic hero. He has some major decisions to make that aren't easy for him, but I liked the choices he did make, because he deserved a second shot at forever love with Ava. Moreover, I liked how protective he was of Ava and how he dealt with the situation between his ex-wife Lexi and Ava. They needed to hash things out to make Lexi see that Ava isn't the evil witch she thinks she is, and besides, the two women needed each other to help them deal with Ava facing the past and Lexi's uncertain future.

Overall, Ms. Mason has penned a wonderful story in this book where I could feel every emotion along with the characters; the intimacy was on the sweet side with closed bedroom scenes; and the secondary characters entertained me just as much as the main ones, especially a particular ghost that wants Ava and Griffin back together. The way this story ended had me cheering for this couple's happy ever after, because it proves that Ava isn't going to let what happened to her in the past stand in the way of her and the hero getting their second chance at love. Besides, Griffin needed to know Ava's reason for leaving him in the past and what Lexi is going through now. I would recommend Starlight Bridge by Debbie Mason, if you enjoy second chance romances or books by authors Susan Mallery, Brenda Novak or RaeAnne Thayne.

BLURB:
A second chance for romance...
Hidden in Graystone Manor is a book containing all the dark secrets of Harmony Harbor, and Ava DiRossi is determined to find it. No one-especially not her ex-husband, Griffin Gallagher-can ever discover what really tore her life apart all those years ago. With Griffin back in town, it's more important than ever that she find the book before someone else does. Because her ex is still angry with her for leaving him. And he still has no idea Ava never stopped loving him...
Ava is no longer the vibrant, happy woman Griffin had once loved and married, and he would do anything to bring back the sparkle to her brilliant green eyes. But what's never changed are the sexy sparks of attraction between Ava and Griffin, and he won't give her up again without a fight. He knows there's the real possibility of a future together... if the truth doesn't burn the bridge between them forever.
Buy Links:      AMAZON | B & N | GOOGLE | ITUNES | KOBO

“How did you get in here?”
Ava’s gaze jerked to the shower curtain, her heart beating double time. She let out the breath she’d been holding when the bed creaked. Simon. Griffin was talking to the cat. “Better question would be, what have you been up to? Your paws are black. Off the bed, buddy.”
Her toes curled in her shoes, a warm, fluttery sensation settling low in her stomach in response to the slow drawl of Griffin’s deep voice. He always spoke in that low, unhurried tone. Even when he was angry or when he was whispering how much he loved her or when he was talking her out of her temper. Only then there’d been a hint of laughter too. Her temper used to amuse him. He had a long fuse; she had a short one. She used to, at least.
Her lips curved at the memories; then her wistful smile faded when the consequences of what he’d just said penetrated her lovesick brain. Simon’s paws were dirty. All she’d need was for Griffin to start looking for the source. She had to…
There was the rasp of a zipper, then the light thud of something hitting the floor. At the sound of heavy footfalls approaching the bathroom, Ava’s eyes went wide, and she pressed her back against the tiled wall. A bare, muscled arm reached past the curtain, a large hand turning on the water. The cold spray from the showerhead hit her in the face, and a small, shocked squeak escaped before she could contain it.
Griffin whipped back the shower curtain. His thick, toffee-colored hair glistened under the fluorescent light, his dazzling, deep blue eyes wide in surprise. She opened her mouth to say something, but the words got stuck in her throat as her eyes drifted down his body. He was completely and gloriously naked. And even more beautiful than she remembered. 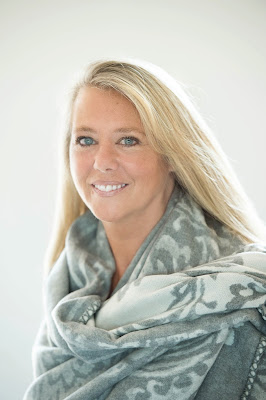 Debbie Mason is the USA Today bestselling author of the Christmas, Colorado series and the Harmony Harbor series. Her books have been praised for their "likable characters, clever dialogue and juicy plots" (RT Book Reviews). When she isn't writing or reading, Debbie enjoys spending time with her very own real-life hero, their three wonderful children and son-in-law, two adorable grandbabies, and a yappy Yorkie named Bella.
Author Links:   WEBSITE | FACEBOOK | TWITTER | GOODREADS