REVIEW: THE BAD BOY NEXT DOOR by JODY HOLFORD 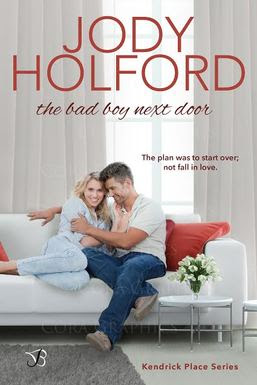 In The Bad Boy Next Door (Kendrick Place #2) by Jody Holford, being the baby of her family hasn't been easy for Shay Matthews, especially considering her three overprotective brothers. Needing her freedom and a chance to see if she can be more independent, instead of relying on her family so much, she moves to Boston. She never expected to meet a man that could convince her to take a chance on love again, but her smoking hot next door neighbor, Wyatt Daniels, manages to get under her skin. Will they both risk their hearts for the chance at happy ever after, or have their past relationships left them too afraid to take a chance on each other?

This is the first book I've read by Ms. Holford, but after finishing this story, no way will it be the last I'll read by this talented author. From the start to finish, this story mesmorized me with its charming characters, well-written dialogue and a fast-paced plot that I couldn't put down because the hero is dreamy, despite his scowling and brooding ways and I couldn't wait to read more about him, especially once he meets Shay.

As for the dialogue, it was intense due to the main characters back stories and what happens to Shay that makes Wyatt realize that there's no possible way he can keep his distance from the heroine. Both Wyatt and Shay have every reason to want to avoid relationships with both being betrayed by the ones they cared for. It made me feel sorry for the two of them, but I'm glad that Shay didn't give up on Wyatt, even when he kept pulling back from whatever was happening between them. However, in saying that, I loved every moment that Shay and Wyatt conversed, as they have such strong chemistry that spilled over onto the pages so sweetly and behind closed doors.

Both the main characters were highly entertaining, and I loved both their back stories. It made them the interesting and attention-grabbing characters that they were, because it wasn't easy for either of them to trust again after the disasters made by the last person of the opposite sex that they trusted. Wyatt being a cop is naturally suspicious, but his past makes him more so, because of what happened during his time doing undercover work. Can Shay show him that not everyone is out to deceive him? Moreover, Wyatt is hard-working, very good at his job and I liked how protective he is of Shay, especially because of what happens to her. But what I liked most of all about the hero is how he finds it hard to stay away from Shay.

While Shay, she's strong and brave by finally making the move away from her family. She needs her freedom after feeling smothered for too long, and I liked that she fought for her independence not just with her overprotective family but with Wyatt too. Indeed, she provides a good challenge for the hero by fighting him every step of the way, when he becomes too overbearing in trying to keep her safe. Moreover, she's smart and I liked how determined she was to prove she can make it on her own, and certainly the quick success she has in her event planning business proves her drive to succeed.

Overall, Ms. Holford has penned a fantastic read in this book where the secondary characters entertained me just as much as the main ones. Especially when the secondary characters are offering sound advice or when Wyatt's jealousy shines through because he thinks he's competing for Shay's affections against another man. The way this story ended had me smiling, because of the way Wyatt made things right between him and Shay. Who knew event planning could be used for the greater good in convincing the heroine how right they are for each other and that they shouldn't allow anything to keep them apart. I would highly recommend The Bad Boy Next Door by Jody Holford, especially if you enjoy the sexy protector trope or if you enjoy books by authors Coleen Kwan, Victoria James or Sonya Weiss.

BLURB:
Shay Matthews moved to Boston for a fresh start...new apartment, new job, new routine. After too many years being coddled by her overbearing older brothers, Shay’s ready for some freedom and maybe a nice, easygoing guy. She wasn’t expecting to literally run into the scowling, brooding, (and unfairly smoking hot) guy next door.

Fresh off a haunting undercover assignment, detective Wyatt Daniels is jaded about life, relationships, and especially happily-ever- after. But there’s something about the independent and beautiful Shay that makes him want to dig deeper. Or stay away, which is definitely the smarter option of the two.

But the more Shay tries to convince herself that her sweet building manager, Brady, is the guy for her, the more Mr. Completely Wrong-for- Her Wyatt invades her mind and her heart.
BUY LINK:  Amazon