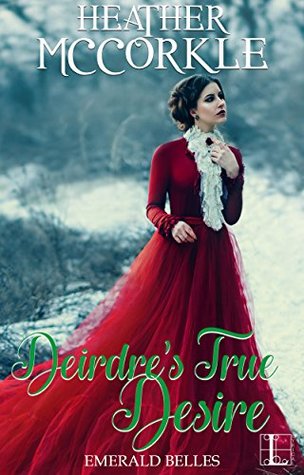 In Deirdre's True Desire (Emerald Belles #3) by Heather McCorkle, arriving in California is a moment Deirdre will never forget, especially since she finds herself being introduced to two very different men in smart businessman Kin O'Leary and cattle hand Dylan. However, as Deirdre does everything she can to find someone to sell her the materials she needs to build her and her friends homes in order to meet the deadline set, she finds herself wanting forever after again, but this time she'll marry for love and not money like her first marriage. Will Deirdre choose the right man and get her second chance at happy ever after, or will the trouble brewing and being aimed at her and her friends get in the way?

The others books of this series have been an absolute pleasure to read, and so, I couldn't wait to dive into Deirdre's story, and I've got to say that Ms. McCorkle has delivered another fantastic read for her Emerald Belles series where the heroine was feisty and not afraid to take on the horrible man determined to chase her friends away; the dialogue was enthralling and made this story fast-paced, as I wanted to discover which of the two men Deirdre would choose; and the tough obstacles the hero and heroine face had me absolutely captivated, as the heroine knows she can always count on her two friends, but doesn't know who else she can trust.

As for the dialogue, it was intense due to everything the man that all the townspeople fear puts Deirdre and her friends through. Will they finally find something that makes people less scared of him? Will the three women ever get out from under the man's threats and intimidation tactics? Moreover, the heroine is strong, brave, independent and I liked that she's determined to marry for love instead of money because she's no longer feeling pressured by her family. I also liked how feisty the heroine was when it came to fighting for what she wanted. While the hero, he's a good guy that is hard-working, will do anything for those he cares about and I liked how protective he was of the heroine. I also liked how Kin and Deirdre interact, as Kin is the first man to make the heroine feel safe and truly loved for who she is -- feistiness and all.

Overall, Ms. McCorkle has delivered a wonderful read in this book where the chemistry between the hero and heroine was strong; and the ending had me loving the words the heroine says to the hero to prove he's the one for her and that she wants forever with him. I would recommend Deirdre's True Desire by Heather McCorkle, if you enjoy second chance romances, the opposites attract trope, or books by authors Sara Portman, Maggie Robinson, Sophie Barnes and Shana Galen.

The moment she arrives in California, Deirdre falls in love with the untamed land that will become the Widows’ Winery. Despite no one in all of Sonoma county being willing to sell them materials or labor, she is determined to find a way to build their homes and the winery. She must, for if she doesn’t meet the land improvement deadline, they’ll lose their land and their dream. This pursuit keeps her in the company of Kin O’Leary, a handsome business man full of innovative ideas. But, considering how she married for money the first time—as her family dictated—she convinces herself she will only find true love in a man of lesser means.Dylan, a strapping young cattle hand who is helping build her home soon catches her eye as well. Her plans for an unconventional romance become derailed when she is forced to spend more time with Kin during the planning of her closest friend’s wedding. Something more than base attractive begins to build in her for him, making her resist all the stronger. It doesn’t help that Dylan has a rugged dangerous side to him that draws her deeper into a world of secrets. With the cattle baron Ainsworth thwarting her every attempt at building the Widows’ Winery, Deirdre’s choice in men may prove their downfall, or their salvation.