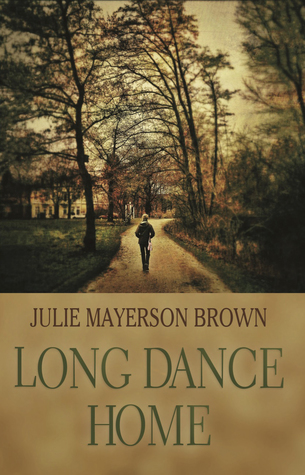 In Long Dance Home by Julie Mayerson Brown, Cece Camden has a plan for everything, except she finds the goals she set for her life aren't working out the way she hoped for. So, when her relationship falls apart and then she finds herself unemployed, Cece decides to return to her hometown of Clearwater. Working to help the local production of The Nutcracker be the best the town has seen in years, Cece finds herself rethinking her plans for her future after questioning a decision she made years ago that may have been the wrong one. Will Cece realize that Clearwater is the place where she's meant to stay, or will she walk away from the man she's fallen in love with?

I am a huge fan of romance books where one of the main characters is a dancer, and Ms. Brown has delivered an enthralling and fast-paced read in this book right from the beginning, because the heroine believes her life is the best it's ever been, and then she suffers a few setbacks that turn her life upside down. Will things ever go back to normal? Will the heroine realize that being home in Clearwater is good for her?

As for the dialogue, it was a wonderful combination of intense moments and teasing banter that's told from the heroine's point-of-view only, but had me loving the interactions between the hero and heroine as well as the secondary characters that are determined to offer their advice. Will the heroine listen to those that care about her? Moreover, the heroine was a fantastic character that had me liking her resilience and courage because the decisions she makes aren't easy ones, but they are definitely the right ones for her in the way she needs the love and support of her family in such a rough patch in her life. I also liked everything she has to deal with when it comes to helping with the town production, as she pushes the kids to dance to their full potential, especially the young girl that's playing the lead because she's an exceptional dancer.

Overall, Ms. Brown has delivered a worthwhile read in this book where the chemistry between Cece and Brad was wonderful and had me hoping that her ex wouldn't come between them; and the ending had me worried for this couple's happy ever after. Yet, in saying that, the epilogue wrapped this story up perfectly, because no one is more suited for Cece than the man she ends up with. I would recommend Long Dance Home by Julie Mayerson Brown, if you enjoy women's fiction, small town romances, or books by authors Mary Ann Marlowe, Robyn Neeley, Lucy Parker and Jami Albright.

Cece Camden has a plan—for work, for love, for life—and she believes she is right on track. But on her 29th birthday, her grand plan begins to unravel, and the disciplined, former ballerina’s life is turned upside down.Newly unemployed and devastated to learn she and her boyfriend are not on the same page, Cece returns to Clearwater, her hometown in Northern California wine country, hoping to find comfort for her broken heart with her family. Being back in Clearwater only adds to her stress, however, when she reluctantly agrees to help rescue a small-town production of The Nutcracker.Having once been the ballerina that would make Clearwater famous, Cece’s return attracts attention, inspires gossip, and forces her to examine a decision she made years before at the most vulnerable time of her life. As old wounds are opened and secrets revealed, long-held beliefs about Cece’s childhood are challenged, leading her to question everything she thought she knew about family, love, and herself.As Cece struggles to accept the truth, she lets go of one dream and discovers a new one, opening her heart to a purpose and a future she had never imagined.