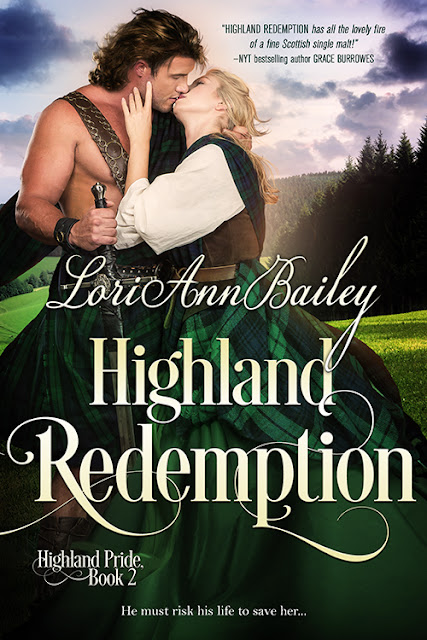 In Highland Redemption (Highland Pride #2) by Lori Ann Bailey, working as a spy is dangerous work and breaking cover could land his entire mission in ruins, but Brodie Cameron is determined to rescue a woman from her kidnappers. However, when he discovers the woman who broke his heart is the woman he's rescued, Brodie is determined to keep her safe. Yet, with a price on her head and an even bigger price on his, will Brodie be able to keep Skye safe or will they lose their second chance at happy ever after?

What a fascinating and wonderful read Ms. Bailey has penned in this story where the pages really flew by, especially with the way this story started by Brodie's determination not to allow a woman to be kidnapped, but then only to find his damsel in distress is Skye. Will he finally learn the answers of why she broke his heart? However, it was from the moment the hero and heroine realize who the other is that had me reading this story rather quickly, determined to discover what was between the hero and heroine in the past and whether they'd have a second chance at forever after.

As for the dialogue, it was intense due to the history between these two and their back stories, but had me loving this couple's growing relationship, as the heroine's future has already been decided and she's determined to do what's right for her clan. Will Brodie finally have it out with the heroine's uncle to make him see that he's the best man for Skye? Moreover, I liked learning all about the hero and his desire for becoming a spy; a career he's succeeded at by the enemies it seems he has. Enemies that led him to make a decision which would protect him and give him the chance at a fresh start with the heroine without having to look over his shoulder if the truth ever came out about him being a certain spy. I also liked how determined the hero was to protect Skye and win her over, because they're meant to be together.

While Skye, she's strong, brave, determined to protect herself from being hurt by the hero again and I could understand why she's willing to go through with her uncle's plan for her to marry because the man has done so much for her. I also liked how loyal the heroine was when it came to her uncle's honor being put into question, even though it appears things aren't always what they seem and that Skye could be wrong. Yet, what I liked most of all about the heroine was that she could admit when she was wrong, especially in the moment when things between her and Brodie are make or break. Will she be able to convince her uncle that Brodie is the man she wants forever? Will her uncle finally realize that Brodie is the right man for his niece?

Overall, Ms. Bailey has delivered a fantastic read in this story where the chemistry between this couple was strong and had me enjoying this couple's growing relationship; the romance was special and shows how much these two are made for each other; and the ending had me loving what the heroine does to make her uncle understand that Brodie is the only man she wants. Really, her words are convincing and prove just how in love she is with the hero. I would recommend Highland Redemption by Lori Ann Bailey, if you enjoy Historical Romance, second chance romances or books by authors Tara Kingston, E. Elizabeth Watson, Alyssa Alexander and Jennifer Trethewey.

While spying for Clan Cameron, Brodie Cameron rescues a lass, only to realize it’s Skye—the woman who’d broken his heart. He needs to get her to her uncle as quickly as possible to keep her safe, but every minute he’s distracted from his mission brings the clans that much closer to war. And having beautiful Skye anywhere near him is dangerous, because the price on his head is higher than the one on hers.

Upon being rescued from kidnappers, Skye finds herself staring into the eyes of the man she once loved—Brodie Cameron. She’s grateful to be freed, but has no idea how she’ll resist the lad who has become a braw man. Especially because she’s promised to another, in a political marriage forged to strengthen the Royalist clans against the Covenanters who plot to turn Scotland upside down.