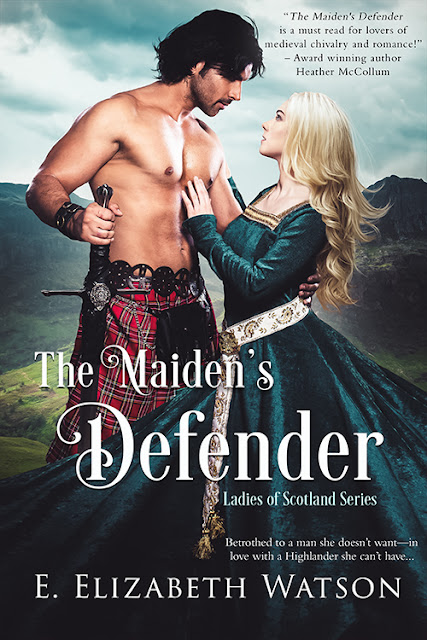 In The Maiden's Defender (Ladies of Scotland #2) by E. Elizabeth Watson, Tearlach McGregor is the right man to train soldiers how to be ruthless, especially since he can take on a number of men and come out on top in a fight. But the moment he rescues Lady Madeline Crawford, Tearlach begins to wish his life could be different and he could give her the life she deserves including love, family and happiness. Yet, when Madeline is informed she's betrothed to another, there's no way Tearlach can stay only to lose the woman he loves. However, Madeline is determined not to give up on them so easily, and as her wedding nears, will she be able to find a way out or will she and Tearlach lose their chance at happy ever after?

I've read quite a few Historical Romance this year, but this story is one of the best so far because both of the main characters were marvellous and had some tough obstacles to overcome; the dialogue was well-written and a wonderful combination of intense moments due to the deviousness of some of the secondary characters that will do anything to make Tearlach and Madeline realize it's not possible for the pair to be together and pleasing banter that had me liking every interaction between this couple, as they grow closer together and make the most of their time together. The way this story started had me worried for the heroine, because she's all alone and finds herself in trouble. Will anyone find her before it's too late? However, it was from the moment the hero and heroine come face-to-face for the first time that had me fascinated by this couple's growing relationship, as they're familiar with each other because he used to work for her villainous father, and Tearlach has always felt something for her. Will he be able to win Madeline heart?

Both the main characters had very interesting back stories with Tearlach being the fourth son of his family and not having to lead the clan, so it's made him take a different path in life. He's tough and confident when it comes to training men to be ruthless soldiers. He's also protective of the heroine and I liked that he would do anything for her, which is proven by what he does to ensure the heroine isn't being taken advantage of and that someone that's trying to use her for their personal gain doesn't get the chance. While the heroine, she's kind, caring, resilient and I liked that she had the courage to stand up to those that are wanting her to marry. I also liked how accepting she is of Tearlach's help, so she can learn things she was never taught growing up.

Overall, Ms. Watson has delivered a wonderful read in this book where the chemistry between this couple was a delight to read and just kept getting stronger, as the heroine did her best to tempt the hero. As for the ending, it had me crying happy tears as the heroine goes to great lengths to find her way back to the hero and make him realize that they're meant for each other. However, I loved how the secondary characters helped the pair find their way back to each other too, because no one is more suited for Tearlach than Madeline. I would recommend The Maiden's Defender by E. Elizabeth Watson, if you enjoy Historical Romance, the friends to lovers trope, the opposites attract trope, or books by authors Heather McCollum, Kathryn LeVeque, Lori Ann Bailey and Amy Jarecki.

Training men to be ruthless soldiers is a skill at which Highlander Teàrlach MacGregor excels. He can kill three men with nothing but a sword and a couple of daggers. After he rescues a ward of the king, the beautiful Lady Madeline Crawford, the fierce warrior begins to yearn for a cottage of his own in the Highlands, with the sweet, delicate Madeline as the mother of his bairns. Madeline begins to see a side of Teàrlach that nobody else has witnessed. The strong silent Highlander takes her to her first fair, teaches her to read, and bestows upon her a passionate kiss—her very first. But Madeline is informed that she is betrothed to another with the blessing of the king, making her and Teàrlach’s love forbidden. Teàrlach, the famed fighter, vows to make Madeline his even if that means bringing down her corrupt warden, and Madeline knows that she must defy the king if she hopes to claim her Highlander.