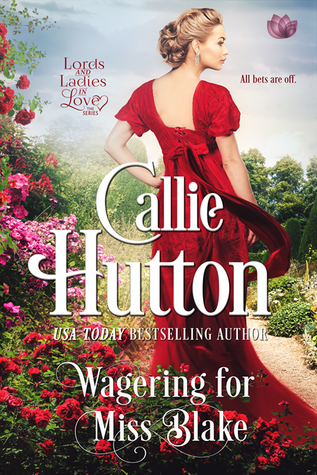 Mr. Giles Templeton, third son of the Earl of Wexford, is a rake of the highest order and a confirmed bachelor. Yet, marriage-minded-mamas continue to drag their daughters to his attention. He's everything a young lady of the ton could want—handsome, wealthy, charming, and kind. For Miss Suzanna Blake, though, Giles is missing the one thing her parents require in a potential son-in-law—a title.  Giles has a golden touch—investments, horses, connections but when he falls…hard for Suzanna, she turns him away, despite the passion sparking between them. At wit’s end, Giles wagers her that not only will she marry him but he’ll make her fall in love with him. If Suzanna wins, she gains a sizable fortune for her favorite charity but she faces a loveless marriage to a titled man. Though her heart yearns for a true love-match with Giles, she has never gone against her parent’s wishes. All bets are off when happiness lies in losing a wager.

In Wagering for Miss Blake (Lords and Ladies in Love #4) by Callie Hutton, Giles Templeton wants Suzanna Blake, but she's looking to marry a man with a title. However, he's not going to let that stand in his way. Getting her to change her mind is harder than he thought, but he's up to the challenge. Will Suzanna see that she and Giles are made for each other or will they lose their shot at happy ever after because she's determined to marry a man with a title?

Having only read one other book of this series, I'm so glad they can be read as a standalone. Really, and this book was such a charming and extremely engaging read where the hero is persistent in his pursuit of the heroine; the heroine is determined to deny her feelings for Giles because her mother is a witch that thinks she knows what's best for her daughter; and the fast-paced plot and riveting dialogue drew me in from the very beginning, as these two dance around each other, but find it too hard to resist their chemistry. What will Giles have to do to win Suzanna's heart?

As for the dialogue, it was entertaining due to the main characters back stories and everything the hero and heroine go through on their journey to happy ever after including the fact that they might never be able to be together since the heroine's mother isn't happy with her own life, so she is determined to make sure her daughter is cared for. However, I liked that these two fought for their chance together because love and happiness is more important than money and being part of top social circles of the ton. Moreover, the heroine is resilient, stubborn and I liked that she couldn't resist the hero because they are so good together and for each other. While the hero, he's confident and I liked that he didn't give up on his pursuit of the heroine, even though there were times when all hope seemed lost for the pair to be together. I also liked that he was strong and brave when it came to getting the one thing they needed to have a chance at a life together -- her parent's permission. Yet, what I liked most of all about the hero was the tight friendships he shared with his friends and how they teased each other. The hero knows what he wants and nothing his friends can say will make him see that he and Suzanna aren't meant to be together.

Overall, Ms. Blake has delivered a wonderful Historical romance in this fourth book of her Lords and Ladies in Love series where the chemistry between this couple was strong; the romance was pleasing and had me loving that Nick would do anything to be with the heroine; and the ending had me loving the hero's determination to win the heroine's heart because they're meant to be. I would recommend Wagering for Miss Blake by Callie Hutton, if you enjoy Historical Romance or books by authors Lenora Bell, Grace Burrowes, Ella Quinn and Jess Michaels.