REVIEW: NEXT TO NEVER by PENELOPE DOUGLAS 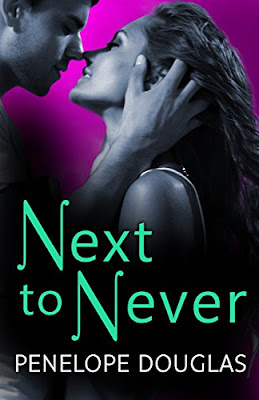 Next to Never
Fall Away #4.5
By: Penelope Douglas
Releasing January 17th, 2017
Piatkus
+ Add to Goodreads

In Next to Never (Fall Away #4.5) by Penelope Douglas, there are a few things Quinn Caruthers would like to do in her life, but with three protective older brothers and a family that she has a hard time saying no to, it feels as though time is slipping by unless she does something about it. She's never been selfish, but when she finds a package that's been delivered anonymously to her; a book containing family secrets, Quinn can't help but be captivated by the tale weaved on its pages. But when she gets to the end, how far will she go to get a chance at the sort of happiness the rest of her family have found?

I read my first book by Ms. Douglas not that long ago, and really enjoyed it, so I was looking forward to reading something else by her. However, in saying that, I wasn't sure about reading this book at first. Not only because I haven't read any of the other books of this series, but because I've sometimes found when a novella is part of a series it tends to end in a cliffhanger. Now, cliffhangers aren't to my liking when it comes to reading romance, so I tend to avoid books that end with them, but I've got to admit that the way this story ended has piqued my interest for the next book. That is, if Quinn finally gets her happy ever after with the one man she's always felt a connection with.

The dialogue was interesting and intense due to the plot of the book Quinn has received. Her parents marriage was nowhere near the fairy tale it is now. They had so much to overcome. Can Quinn come to terms with how her parents relationship began? Will it make her realize not to settle down if she hasn't found Mr. Right? Will Quinn finally decide to live her life the way she wants to live it, instead of continuing to give in to doings things for her siblings when they ask?

As for Quinn, she's strong and brave in the way she continues to read the book she's been given, no matter how hard the plot is for her to handle because it's based on the relationship of two people she loves. She's also kind, caring and I loved the moment when she let her adventurous side out, even knowing that some of her family members wouldn't have been thrilled with what she did with her another member of her family.

Overall, this was a really good in-between story told from Quinn's point of view and I loved the way it ended. Will Lucas return home, so he and Quinn can have their own happy ever after like her siblings have found with their partners? I would recommend Next to Never by Penelope Douglas, if you've read the previous books of this series or if you enjoy books by LJ Shen or Emma Hart.

BLURB:
Under the close watch of the men in her family, Quinn Caruthers has found it nearly impossible to spread her wings - or even date - without her three older brothers, Jared, Madoc and Jaxon, jumping in to hover. And when a family friend - several years older - from her childhood still holds her heart, she knows they're going to be a problem. Lucas Morrow is a man, and knowing her brothers, he may as well be forbidden.

But years ago, Lucas left town and shows no signs of returning. Quinn knows she shouldn't wait for him anymore.

Until a package turns up on her doorstep with no return address and its contents reveal family secrets that threaten to turn her world upside down. She's never asked about the path of her parents' romantic history, but she soon learns their happy marriage had a very rocky and passionate start.

As she starts to see things around her with new eyes, Quinn will have to make tough choices about whether she'll keep waiting . . . or finally go after what she really wants.
BUY LINK:  Amazon