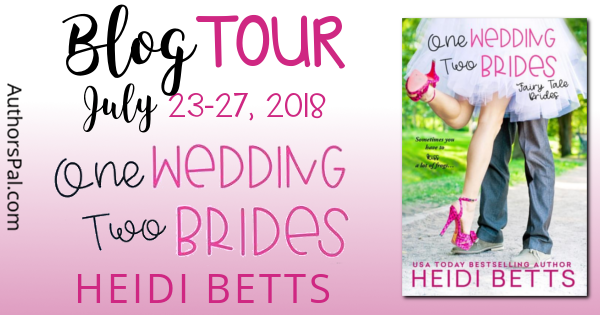 Sometimes you have to kiss a lot of frogs…

Jilted bride Monica Blair can’t believe it when she wakes up next to a blue-eyed, smooth-talking cowboy in the middle of nowhere and with a ring on her finger. It had sounded like a great plan at the time. Get married, get revenge, and get her money back. So why is she cleaning out stables and trying to keep her hands off the hot cowboy helping her?

Ryder Nash would have bet his best Stetson that you’d never see him walk down the aisle. But when the city girl with pink-streaked hair and a frog tattoo hatches a plan to expose the conman who married his sister, no idea is too crazy. And even though Monica might be the worst rancher’s wife he’s ever seen, he can’t stop thinking about the wedding night they never had.

In One Wedding, Two Brides (Fairy Tale Bride #1) by Heidi Betts, Monica Blair is determined to get revenge on her ex and show him what he's missing out on by marrying someone else. Except embarrassing herself and then waking up the next morning, only to discover she doesn't remember much is trouble with a capital T, especially once she learns she got married and made a deal with Ryder Nash that may be impossible to break. However, the more time Monica spends with her new husband, Ryder, the more she finds herself falling in love. Will Monica and Ryder give their marriage of convenience a chance for real or will they walk away from their shot at happy ever after before they get hurt?

What a fun, amusing and absolutely engaging read Ms. Betts has delivered in this first book of her Fairy Tale Bride series, which had me laughing at the heroine's determination to get revenge on her ex because it's palpable she's lost her mind and needs to go to be taken to a loony bin for her craziness, especially considering how far she's determined to go to get revenge. Is her plan just a little too crazy? Will the hero be willing to help her, especially considering what he could benefit with making the deal Monica proposes?

As for the dialogue, it was intense due to the main characters back stories and everything this couple go through on their journey to happy ever after, as the heroine has managed to get herself in deep with the hero, and if things don't work out then she'll owe him big time. Will things go the way Monica wants? Will she be able to help the hero with his ranch? Moreover, the heroine is resilient, courageous, feisty and I liked how determined she was to get everything she's owed when it comes to her ex because he's taken too much from her. No way can she let him win. While the hero, he's confident, charming, a good brother and I liked that he was willing to help the heroine because there's no way he's going to let her ruin the happiness of someone he cares about. I also liked how far the hero is willing to go to make sure he gets everything out of the bargain he made with the heroine. Then again, it's no hardship for him to spend time with her.

Overall, Ms. Betts has delivered a wonderful read in this book where the chemistry between this couple was strong and present from the moment they meet; the romance was nicely-detailed and had me loving these two together; and the ending left me completely satisfied when it comes to this couple's happy ever after. Luckily, the hero realizes he can't let the heroine go, especially when she's helped him so much. I would recommend One Wedding, Two Brides by Heidi Betts, if you enjoy the opposites attract trope, the enemy to lovers trope, the revenge trope or books by authors Marissa Clarke, Donna Michaels, Christine Phillips and Nina Croft.

“This is the stable,” he said, still stroking the now-calm mare. “We have about a dozen horses here at any one time.

Some are mine, some are boarders, some are here for stud.”

Her brows arched at that. She didn’t know much about horses, but she knew what “for stud” meant. Before Ryder could spot the slight blush heating her cheeks, she turned away and pointed toward the doorway where Ryder had disappeared and then reappeared after her near-death by horse breath. “What’s in there?”

“That’s the tack room.” He opened the door and led her inside.

This room held no similarities to the one in the other barn where Ryder had found her hat and boots. Large where the other was small, this tack room was also neat, free of spider webs (and spiders, she hoped), and filled with saddles so clean, they shone. The smell of leather and saddle soap permeated the air. The dark colors of assorted saddles gleamed in the light from the one bulb in the center of the ceiling. All different styles of bridles and bits hung from hooks on the walls.

“Have you ever ridden?” he asked.

“No,” she answered, shaking her head for emphasis. She knew the difference between English and Western saddles, could tell a bit from a hoof pick, but all of that knowledge came secondhand from books and television, or the one western-wear photo shoot she’d done. She’d never been near a horse—except for Chynna back there—and didn’t care to alter that situation this late in her life. Having one of those creatures chewing on her hair had been traumatic enough.

Climbing on top of one was about as high on her wish list as napping on train tracks.

An avid romance reader since junior high, USA Today bestselling author Heidi Betts knew very early on that she wanted to write these wonderful stories of love and adventure. It wasn’t until her freshman year of college, however, when she spent the entire night reading a romance novel instead of studying for finals, that she decided to take the road less traveled and follow her dream. Soon after joining Romance Writers of America, Heidi’s writing began to garner attention, including placing in the esteemed Golden Heart competition three years in a row. The recipient of numerous awards and stellar reviews, Heidi’s books combine believable characters with compelling plotlines, and are consistently described as “delightful,” “sizzling,” and “wonderfully witty.”