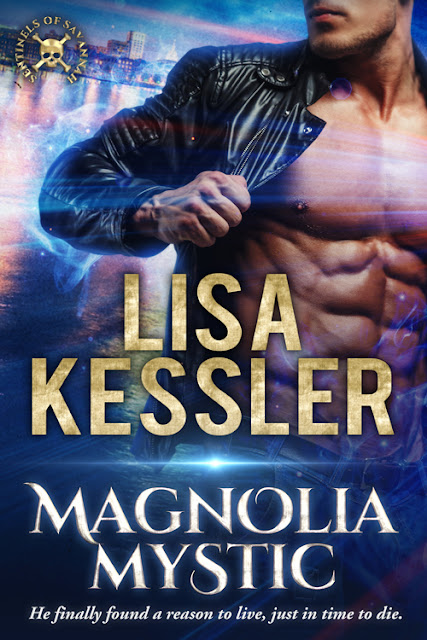 Skye Olson is a psychic like her mother, and her grandmother before her, but a bad break up with the man she thought was her soulmate has left her confidence in her abilities shaken. While she's in crisis, a real estate tycoon from Atlanta swoops in with his eyes on her shop.

Colton Hayes spent his mortal life plundering royal ships with his pirate crew, but one holy relic changed everything. Now he and the rest of the crew protect the port of Savannah from their captain who traded his cutlass for a fountain pen.

When Colton discovers the captain wants to build a hotel in the heart of historic Savannah, he sets out to stop him, but nothing could prepare him for the sexy smile and violet eyes of the Magnolia Mystic.

In Magnolia Mystic (Sentinels of Savannah #1) by Lisa Kessler, Colton Hayes is determined to protect Skye Olsen, especially since she's the one that could change his life for the better. However, he knows getting the captain of his once mortal pirate crew to nix his plans isn't going to be easy. Will Colton find a way to help Skye, so they have a chance to be together forever; or will Colton's secrets send Skye running once she learns the truth?

This was such a quick and fascinating read, which I loved from start to finish due to the main characters back stories and their journey to happy ever after. Will Skye ever be able to put her trust in another man again? The way this story started drew me in immediately, as the heroine needs to see what she's doing through, otherwise she'll never be able to heal from the pain her ex has caused. However, it was from the moment the hero and heroine come face-to-face for the first time where this story really comes alive because the heroine is feisty and isn't afraid to say whatever is on her mind.

As for the dialogue, it was intense due to the main characters back stories and I couldn't help but sympathize with the pair, as both have been through so much. Will the hero be able to restore the heroine's faith in men? Moreover, the heroine is strong, brave, independent and I liked how she handles herself when it comes to dealing with difficult men that think money is everything. I also liked that she took a chance on the hero, even though it isn't easy for her to do after what her ex did. While the hero, he's a good guy, confident, charming and I liked how determined he is to protect Skye from being taken advantage of. No way will he allow the captain to get his way. I also liked the hero's determination to win Skye over because she's the one for him; the one that will make life all the more interesting and exciting for him.

Overall, Ms. Kessler has delivered a really good read in this book where the chemistry between this couple was strong from the moment they meet and just keeps getting stronger the more they interact; the romance was nicely-detailed and had me loving these two together; and the ending had me worried for this couple's happy ever after because some things are just too hard to handle. Will the heroine put her trust in the hero? However, it was the last chapter that wrapped this story up nicely, as the hero and heroine are so happy together and have many more adventures to look forward to in the future, especially when there's so much at stake. I would recommend Magnolia Mystic by Lisa Kessler, if you enjoy the opposites attract trope, paranormal romance or books by authors Heather McCorkle, Juliette Cross, Nina Croft and Shelli Stevens.

“Tour’s up on the bow.” A tall shadow fell over her.   She didn’t take her eyes off the river.

His boots thumped on the deck behind her. “I wasn’t givin’ directions.”

She sighed and glanced over her shoulder. Her gaze traveled up his body, way up, to focus on his dark eyes. “I just need a minute.”

He shook his head, crossing his tan muscled arms over his broad chest. “Plenty of minutes are available with the tour. This area’s off-limits.”   He was just doing his job, but her tolerance for men was at an all-time low at the moment.

“I’m not going to touch anything.”

His eyes moved to her feet and back to her face. “Seems you already are.”

Heat burned in her cheeks. “What is it with you men thinking you can just make a law and judge us when we question it?” She jammed the ring in the pocket of her jeans. “I’m sick of your shit. So if you want me to move, you’ll have to do it yourself.”

He raised a brow. “You finished?”

His calm only fueled the tempest inside her. “No, actually, I don’t think I am.” She matched his posture: chest out, arms crossed. “My family’s been in Savannah since it was settled. I know the pirate stories, and I didn’t buy a ticket for a tour and ‘swearing in’ ceremony under the pirate mast. Forgive me for wanting a few minutes peace with the Savannah River.”

He pointed to a sign.   Area is for Crew Only   A spark lit in his eyes. “If you’d been sworn in, you might be able to sway me to let you stay.”

She blew out a frustrated breath, her hands falling to her sides. “Look, I just wanted to toss my engagement ring into the river without getting arrested for littering. I figured no one would see me from up here.”

He relaxed his stance a little. “Must be an idiot to allow a fiery lass like you to get away.”

A hint of a smile curved his lips. “Wasn’t flirtin’, just stating a fact.” He glanced over his shoulder. “Speaking of facts, you should pawn the ring. Feedin’ gold to the fish won’t cure heartache.”

Lisa Kessler is a Best Selling author of dark paranormal fiction. She's a two-time San Diego Book Award winner for Best Published Fantasy-Sci-fi-Horror and Best Published Romance. Her books have also won the PRISM award, the Award of Excellence, the National Excellence in Romantic Fiction Award, the Award of Merit from the Holt Medallion, and an International Digital Award for Best Paranormal. Her short stories have been published in print anthologies and magazines, and her vampire story, Immortal Beloved, was a finalist for a Bram Stoker award. When she's not writing, Lisa is a professional vocalist, and has performed with San Diego Opera as well as other musical theater companies in San Diego.