REVIEW: TOUCHED BY YOU by ELLE WRIGHT 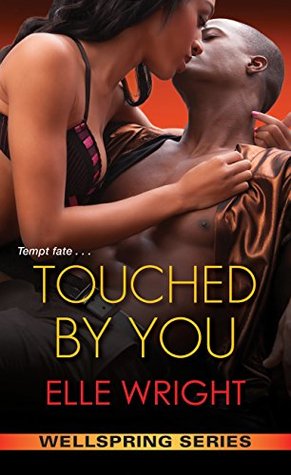 Touched by You
Wellspring #1
By Elle Wright
Releasing May 29th, 2018
Dafina

Unimaginable luxury. Longstanding wealth. A powerful family empire that controls the town of Wellspring, Michigan. But three heirs are done--with all of it. Now one by one, these very different siblings are seizing control of their lives . . . and daring to find real hometown love.
Brooklyn Wells has fought her dominating father, CEO Parker Wells, every step of the way. Instead of taking her appointed place in the boardroom, she's a social worker. Instead of living for diamonds and designer gowns, she helps her community's poor and lost. And now she's falling hard for the troubled newcomer who saved her life--and holds dangerous secrets . . .For Carter Marshall, Wellspring offers a chance to put tragedy behind him and start again. Caring too much is not in the plan--until the irrepressible Brooklyn teases him to live once more . . . and recklessly lose himself in passion.But Parker Wells has a major deal riding on his daughter's arranged marriage. And he won't stop at using Brooklyn and Carter's pasts to drive them apart. As they fight scandal, betrayal, and their own vulnerabilities, will the fire between them burn even hotter--or flame out for good?

In Touched by You (Wellspring #1) by Elle Wright, Brooklyn Wells is finally determined to get out from her dominating father and show him that she doesn't need his money. However, nothing is ever simple, especially when her father continues to deprive her of everything she needs to survive -- money, a job and a place to live. Yet, she isn't about to let him win. Luckily, there's someone willing to help her in her time of need -- Carter Marshall, even if it could cost him everything he's worked so hard for. Will Carter be able to prove to Brooklyn that she can trust him or will she walk away from her shot at happy ever after to protect him from her ruthless father?

This was such an entertaining and captivating read, of which I loved from the beginning, as the heroine fights her father every step of the way no matter how many obstacles he puts in her way to independence and finally showing him that she will no longer be controlled by what he can offer -- the lifestyle of the rich. However, it was from the moment the hero and heroine come face-to-face for the first time that I loved most about the beginning, as the hero works hard to get to know the heroine and as the story progresses is determined to protect her, no matter what the consequences are when it comes to him working for Wells family company. Will Brooklyn be able to make sure Carter keeps his job?

As for the dialogue, it was intense due to the main characters back stories, as the heroine is determined to find her father's vulnerabilities. Will she find what she needs to finally get her ruthless father to back down? Moreover, the heroine is strong, courageous, driven, smart, hard-working and I liked her determination to fight for her freedom because there's no way she can marry someone she doesn't even like. And besides, Carter is way more interesting than her ex so why wouldn't she fight? I also liked that she took a chance on the hero and that she would do anything to protect him, if being with her started to work against him. Because her father is a very influential man that could put Carter out of business if he's not careful. Yet, what I liked most of all about the heroine was the close relationship she had with her brother and that he would do anything to help her, even if it could mean things being turned upside down for his world as well as hers. Will their father start to punish the heroine's brother for helping his sister?

While the hero, he's worked hard to get to where he is, and yet, I liked that he was willing to help the heroine no matter the consequences. I also liked his confidence and his determination to win over the heroine because she's the first woman to interest him in a while. Yet, what I liked most of all about the hero is the choices he made throughout this story that changed his life for the better, as he shouldn't allow the past to continue to haunt him.

Overall, Ms. Wright has delivered a superb first book for her Wellspring series where the chemistry between this couple was off-the-charts; the romance was delightful and had me loving these two together; and the ending had me loving the way Carter supports the heroine through thick and thin, especially with what happens with her dad. Will everything work out for the best when it comes to the battle she faces with her father? However, it was Carter's surprise for the heroine that I loved the most because Brooklyn has changed his life and there's no way he can let her go. I would recommend Touched by You by Elle Wright, if you enjoy the mysterious strangers trope or books by authors Farrah Rochon, Delaney Diamond, Cheris Hodges and Kianna Alexander.