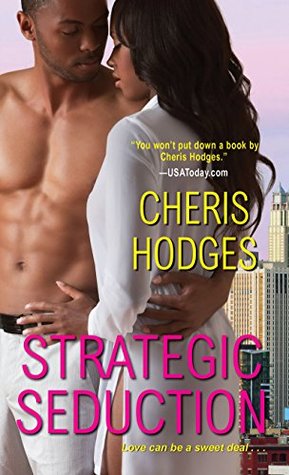 Alicia Michaels needs a major career reboot, so she’s got no time for romance. But starting over in Atlanta is an uphill battle for the cautious PR rep—especially after she teams up with wealthy Richmond Crawford on a make-or-break project. For one thing, the risk-taking entrepreneur is nothing like the staid businessman he used to be. For another, she and Richmond can’t see eye-to-eye on anything—except that the reckless attraction between them is sizzling, off-the-charts trouble . . .   Playing by the rules got Richmond betrayal from his rich family—and shattering heartbreak. He’s got to prove he can be his own man, so keeping things strictly-business with Alicia is the smart play. Still, even their conflicts only make Richmond want more of her honesty and courage. But a shocking revelation will endanger everything they’re fighting to build. And making things right could be the final deal breaker . . .

In Strategic Seduction by Cheris Hodges, Alicia Michaels is determined to prove she has what it takes to be a great PR rep. However, teaming up with Richmond Crawford is more than she bargained for, especially when he's on her mind more than doing a good job. Yet, when their pasts come back to haunt them, will they continue to fight for their chance at happy ever after or will the pair walk away from each other?

When I started reading this book, I could not get into it. Yet, in saying that, I did liked the way this story progressed and found that it really took off once the hero's ex-wife and someone from the heroine's past began to cause trouble for the pair's growing relationship. Will the hero and heroine be able to find a way to fight back against someone wanting to hurt their chance of happy ever after?

As for the dialogue, it was intense due to the main characters back stories, as both the hero and heroine have been through tough times that still have a huge impact on them. Since the heroine has kept some details of her life from the people that have always been there for her while the hero is still dealing with the fallout of information he's learnt when it comes to his family. Moreover, the heroine is resilient, courageous and I liked how determined she was to resist the hero because her job is important to her and she wants to do the best job she can. I also liked the close friendships she shares with some of the secondary characters and the way they tease her about her relationship with Richmond. Will they be able to convince her that she deserves to be happy and that she should give the hero a chance?

While the hero, he's confident, had it rough because his ex-wife is an absolute witch that doesn't know how to let go because she isn't getting what she wants out of him, and I liked how determined the hero was to win the heroine over because he's had feelings for her ever since they met. Will Alicia give the hero a chance? I also liked the close relationship the hero had with his brother and that his brother was willing to do anything to support him through thick and thin, especially when it comes to dealing with Richmond's ex-wife. However, there were moments where I was frustrated by the hero because he was willing to do whatever it takes to make sure his newest venture took off, even if it meant dealing with people that could end up hurting his chances instead of helping him such as a certain politician that doesn't like Alicia all that much.

Overall, Ms. Hodges has delivered a read that I liked and where the connection between this couple was there from the beginning; the romance was nicely-detailed and had me loving that Alicia took a chance on Richmond; and the ending had me loving the heroine's courage to fight the people trying to cause trouble for her and Richmond's relationship. Then again, what's a better way than to fight fire with fire or in her case see that her ex can no longer hurt her the way she does. Certainly, there are great ways she can protect herself and what she does is definitely the way. However, it was the epilogue that wrapped this story up nicely, as Alicia and Richmond have found the happiness they both deserve. I would recommend Strategic Seduction by Cheris Hodges, if you enjoy the friends to lovers trope, workplace romances, boss-employee romances or books by authors Elle Wright, AC Arthur, Deborah Fletcher Mello and Synithia Williams.