REVIEW: HALF EMPTY by CATHERINE BYBEE 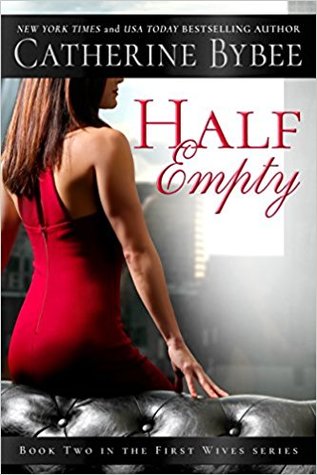 New York Times bestselling author Catherine Bybee continues her sassy series with another of the First Wives finding that love and secrets are a dangerous combination.
Trina Petrov’s marriage-by-contract was only meant to be temporary. But when tragedy strikes, Trina is left one of the wealthiest women in the world. To recover from the shock, she takes some time off in Italy, swearing not to fall for any men while there. But that doesn’t mean she can’t fall for anyone on the trip home…
Country-music superstar Wade Thomas is lying low in a hotel bar when he gets the cold shoulder from the woman next to him. He’s used to fans fawning at his boots, and Trina is a refreshing change—so is the fact that she has no idea who he is.
As things begin to heat up, Trina discovers that the circumstances of her late husband’s death are not what they seemed. Now she’s in trouble, and Wade isn’t about to let her out of his sight. Getting close to love and danger could get them killed…or it could sweep them both off their feet.
BUY LINK:  Amazon

In Half Empty (The First Wives #2) by Catherine Bybee, Trina Petrov is a rich woman thanks to her marriage-by-contract arrangement. However, being rich isn't all it's cracked up to be, considering it's been more bad than good with the trouble she's had since her husband died. Dragging country-music heart-throb Wade Thomas into the trouble she's facing isn't something she wanted, especially knowing how dangerous the people coming after her are. Still, she's lucky to have him on her side. Will Trina and Wade find a way to be together or will someone determined to take everything from Trina get their way?

Reading a new book by Ms. Bybee is always exciting and I've got to say that this second book of her First Wives series was an absolutely engaging, fast-paced, marvellous read about the tight bonds of friendship; a heroine's fight for survival and finding the kind of love she deserves; and a hero determined to protect the woman he's coming to love. Will Trina and Wade come out on top against the trouble the heroine faces because of her past?

With the dialogue, it was intense due to the main characters back stories and everything both the main and secondary characters go through on their journey to happy ever after. However, there were moments where I was shaking my head at one of the women Trina is friends with because she has serious daddy and trust issues and was a little too opinionated for those reasons. Then again, it could be she's just overprotective of Trina because she doesn't have much else to do with her time than worry about her friends, look pretty and spend money. Yet, in saying that, I loved the direction Ms. Bybee took this story in, which had me warming up to the heroine's friend, especially with what she goes through that sends her from a confident woman to a very vulnerable one, which will make things interesting for the next book of the series.

As for Trina and Wade, they were two brilliant main characters with interesting back stories; off-the-charts chemistry; and tough obstacles to face to be together including winning over Wade's mom. Will Trina be able to win the hero's mom over? Moreover, the heroine is resilient, courageous, determined to protect those that she cares about and I liked how she handled everything she faces when it comes to someone coming after her, which gets more and more dangerous and harrowing, especially because of things Trina and her friends discover. While the hero, he's charming, confident, good for Trina and I liked how determined he was to protect her. I also liked how Wade handled everything thrown at him when it comes to Trina's past and her friend's protectiveness. Yet, what I liked most of all about the hero was his determination to make those that care about him know that Trina is the one for him no matter what anyone says.

Overall, Ms. Bybee has delivered an enthralling read in this book where emotions run high; the nicely-detailed romance does justice to this couple's intense chemistry; and the ending had me on the edge-of-my-seat with worry due to what the main characters experience at the hands of a madman, but had me loving how right everything turns out. Really, Trina is lucky to have such wonderful support in the secondary characters. I would recommend Half Empty by Catherine Bybee, if you enjoy romantic suspense, contemporary romance mixed with a good dose of suspense, second chance romances or books by authors Melinda Leigh, Kendra Elliott, Jill Sanders and Ruth Cardello.