REVIEW: WITNESS IN THE DARK by ALLISON B. HANSON 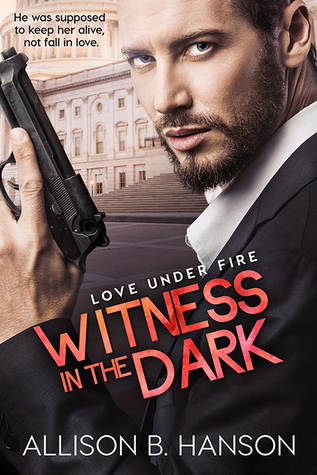 Witness in the Dark
Love Under Fire #1
By Allison B. Hanson
Releasing November 27th, 2017
Entangled Publishing

Deputy Marshal Garrett McKendrick does not get involved with witnesses he's tasked to protect. Especially when his boss has a very personal reason for keeping Samantha Hutchinson alive. Can you say off limits?But as Garrett battles to keep Sam safe from the powerful and influential people out to silence her—permanently—he finds she's strong, feisty, and willing to risk everything to tell the truth. And totally irresistible. Losing everything you know and love might just be worth it to meet an amazing man like Garrett. But when Sam learns he has been keeping secrets from her—big ones—she’s convinced his affectionate words were all for the sake of the job. She sends him packing. But can her new protective detail be trusted? The last team betrayed her to the enemy...Garrett isn’t about to take any chances. Not with the woman who has stolen his heart.

In Witness in the Dark (Love Under Fire #1) by Allison B. Hanson, Deputy Marshal Garrett McKendrick is exceptional at his job and has never gotten involved with a witness. However, there's something about Samantha 'Sam' Hutchinson that he can't seem to resist. But when she discovers the truth of what he's hiding, will he be able to convince Sam that he was keeping things from her for the right reasons or will they lose their chance at happy ever after?

I have just read this book after having read the second story of the series a while back and I've got to say that Ms. Hanson knows how to deliver an exceptional romantic suspense that provides a good dose of suspense and romance. The way this story started had me immediately hooked because of what the heroine is going through. Yet, it was from the moment the hero and heroine meet for the first time that I loved, as the heroine is now a target and needs someone to keep her safe.

As for the dialogue, it was very engaging due to the main characters back stories and everything the heroine goes through because there are a few shocks for her, especially a big one where betrayal stings because of what she discovers. Moreover, the heroine is resilient, courageous, feisty and I liked how determined she was to do what's right no matter how danger she ends up in. While the hero, he's confident, good at his job and I liked how determined he was to protect the heroine, even when something happens that could break the trust she's put in him.

Overall, Ms. Hanson has delivered a fantastic and thrilling ride for readers in this book where the chemistry between this couple was strong and tangible; the romance was delightful and had me loving this couple together; and the ending had me on the edge-of-my-seat because of the danger this couple face, but had me loving how things work for the hero and the heroine, as they both deserve the happiness they've found together after everything that has happened in their pasts. I would recommend Witness in the Dark by Allison B. Hanson, if you enjoy romantic suspense or books by authors Tee O'Fallon, Cathy Skendrovich, Sidney Bristol and Tonya Burrows.