REVIEW: THE ATTRACTION OF ADELINE by LISA WELLS 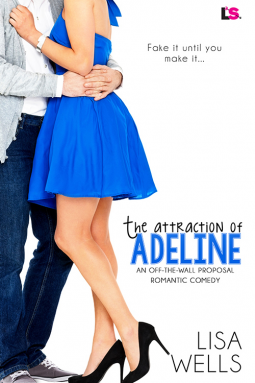 In The Attraction of Adeline (Off-the-Wall Proposal #2) by Lisa Wells, Jack Foster wants a promotion at the firm he works at so badly, but with boss being completely old-fashioned and believing a man is more reliable if he's in a committed relationship, he needs a fiancée. Getting Adeline Rigby to agree to be his pretend fiancée for a month isn't easy, especially when she's so adamant she's better off alone than in a relationship, even one that is only temporary. However, once she agrees, the more time Jack spends with her, the more he finds himself unable to give her up. Can Jack convince Adeline that love is worth fighting for, or will she crush his hope of the two of them being together forever?

Having absolutely loved the first book of this series, I couldn't wait to dive into this book, and I can say this story was just as good. The way this story started had me laughing because of the situation the heroine is in. She could definitely use something to help loosen her up, and what the secondary characters convince her to do is a good start. However, it was the moment that the hero and heroine were introduced to each other for the first time where things became very interesting, as Jack's sister who is also Adeline's best friend is determined to find them both the kind of happiness that she has found with her man.

As for the dialogue, it was riveting due to the main characters back stories and their growing relationship. Adeline doesn't have time for a relationship with what's happening to Dottie, the only woman she's ever considered her mother. How can she possibly spend time helping Jack when she needs to be there for Dottie? Moreover, neither Adeline or Jack want happy ever after due to all that they've been through in the past. Jack's ex was a real piece of work that used him and Adeline believes she's better off alone, seeing as she's never witnessed a healthy relationship.

Both the main characters were really good, although I did get frustrated with Adeline at various moments throughout this story. How could she do what she does to Jack, when it was palpable how much she loves him? However, I could understand why she made the decisions she does because she doesn't want to lose her independence and have to rely on anyone else. Not after all that she's been through over the years to become the woman she is now. While Jack, he's confident, smart and I liked that he didn't express his love for Adeline until he believed she was ready to hear the words, even though that seemed like it would take a while into the story, because the heroine was so adamant that forever love wasn't in her future.

Overall, Ms. Wells has penned a delightful read in this book where the chemistry between these two was strong and Jack shows Adeline how good love can be through his actions and words. No way would she be able to resist him forever. The way this story ended had me cheering for this couple's happy ever after, as Adeline had to realize that she needs Jack in her life to ever truly be happy. Moreover, the epilogue wrapped this story up nicely, because Adeline's dreams were coming true and I liked the name she had for one of the items she bakes. Is Jack lucky? I would recommend The Attraction of Adeline by Lisa Wells, if you enjoy the fake relationship trope.


1. Maintain distance. Three get-to-know-you dates before announcing their engagement will be tempting enough.


3. No touchy feely stuff. Or at least not too many public displays of touchy-feely stuff.


5. All right, all right. One night of sex in order to be a believable engaged couple.


6. Two nights of mind-blowing sex to make sure first night wasn’t a fluke.

7. Absolutely, positively, no falling in love.