REVIEW & GIVEAWAY: ONE AND ONLY by AMY KNUPP

Enter to Win a $10 gift card to Bookseller of choice,
or Digital copies of SOFT SPOT and SWEET SPOT (Two Winners) 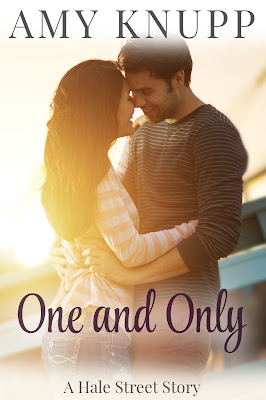 One and Only
Hale Street #7
By: Amy Knupp
Releasing March 7, 2017
Self-Published

In One and Only (Hale Street #7) by Amy Knupp, losing his wife has been hard for Micah Sullivan. He's barely living after quitting the band he played with and now he runs his own music store instead. When he comes face-to-face with Sloan McGuire, his late wife's best friend again, she challenges him to finally deal with his wife's death once and for all and to start enjoying life once more. Will he find it within himself to give love another chance, or will his guilt of circumstances he couldn't prevent in the past stop him from moving on?

Having not read any of the other books of this series, I was glad that this could easily be read as a stand-alone and I've got to say that this story makes me want to read the previous six books, because I really enjoyed the secondary characters. From start to finish, this book was entertaining, fast-paced and a book I wished I'd had the time to read from beginning to end in one sitting. Not only because this story encompasses the second chance romance trope, but because I really enjoyed the main characters and the obstacles they have to face to achieve their happy ever after. Can Micah find a way to let go of his guilt? Can the hero prove to Sloan that she'll always come first? Can Sloan overcome the fact that Micah is her late best friend's husband?

As for the dialogue, I loved every moment the hero and heroine conversed. Sloan isn't afraid to push until she can get Micah to open up about why he's taken a step back from what he really loves -- playing music. Will she convince him to play in a band again? However, the dialogue was also intense too due to the main characters back stories. Sloan has never had anyone put her first, and she's had enough of that. Really, I was cheering for her when she finally spoke up to those she felt did her wrong. Indeed, the heroine is strong, brave and I liked how determined she was to help the hero. He needed to realize that what happened to his wife / her best friend wasn't anyone's fault. That there was nothing anyone could do to save her.

Both the main and secondary characters were fantastic, and it's palpable how much the hero and heroine need each other to heal from the hurts of their pasts. Sloan and Micah have tough decisions to make, and I liked the choices they do end up making such as the hero finally interacting with those he loves again. Because they were the right choices for this couple, if they're going to give happy ever after a shot. The hero has so much more to offer than just working in the music store he owns and Sloan is determined to prove it, even if it means pushing him outside of his comfort zone. Moreover, I felt sorry for him when it comes to the moment where he needs to choose between letting go of the past and embracing the future. Can he let go of the guilt he's felt over not being there for his wife when she died?

Overall, Ms. Knupp has penned a really good read in this book where the strong chemistry between the main characters needed to explored, and eventually spilled over onto the pages in sex scenes filled with exquisite heat and passion that illustrated how good these two are together. The way this story ended had me worried for Micah, because of what happens to Sloan and the painful way it reminds him of the past. Can he overcome his guilt for not being there for another woman he cares about? However, in saying that, I really liked how the hero was determined to win Sloan back and she sort of disrupted his plans by also going after what she wants -- the hero. I would recommend One and Only by Amy Knupp, if you enjoy the friends to lovers trope or second chance romances.

BLURB:
Drummer Micah Sullivan lost his music and his dreams when his wife died unexpectedly. In the emotional aftermath, he quit his successful country band and pushed away his family and friends. Three years later, he’s opened a music shop on Hale Street in Nashville and tells himself he’s content trying to make it a hit. What he failed to consider is that success requires connections—including the very ones he turned his back on.
Sloan McGuire is up for a new challenge…never realizing it might lead to heartbreak. When she takes a job as entertainment manager at a bar not known for its music, she doesn’t bargain for running into Micah, whose late wife was her best friend. She can tell within minutes that he’s still grieving. Out of love for her friend, she attempts to reconnect with the reclusive drummer. Falling for him isn’t in the plans, though—not only because he was married to her friend but because she’s been second-best before, and she never wants to play that role again.
As Micah starts finding his rhythm, life throws him a different beat. But with a little improvisation and a lot of courage, he just might tap into the one and only connection he needs.
Buy Links:      AMAZON | ITUNES | KOBO

“It’s not every night a girl gets an offer to spend time with the world-famous Micah Sullivan and his family.”


“I’m going to pretend you didn’t say that.” His heart hammered in his chest and lust pounded through his veins as he breathed in her scent, a light, floral something that made him feel more alive than he’d felt in forever.
“Oh, sorry,” she said, her lids lowering halfway and her voice going quieter, more private as he slid his hands to each side of her tiny waist. “I forgot you prefer Just Micah.”
He couldn’t answer, wasn’t even sure what she’d said, because his gaze had homed in on her plump bottom lip, where there was still the hint of a sheen from her lip gloss, and he suddenly wanted more than anything to taste her.
He dipped his head down and touched his lips to hers, only intending a quick taste, but when he felt her arms go around his neck and sampled the sweetness — chocolate and a faint hint of strawberries — he couldn’t have backed off if someone held him at gunpoint. He swept his tongue over her lower lip, teased the seam, and when she pressed the tip of her tongue to his and they swirled together, he couldn’t hold back the rumble that came up from his throat.
“You’re too tall,” Sloan said, pulling away only enough to get that out before she pressed her lips to his again.
“You’re too short,” he managed, not recognizing his own voice. He braced his hands on the backs of her upper thighs and lifted her so that their mouths lined up perfectly, then took a couple steps so her back was to the wall as he sealed his mouth to hers again, angling his head for better access. Sloan’s legs wrapped around him, and he was suddenly so hot it felt like the house was on fire. 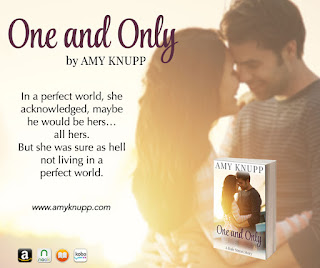 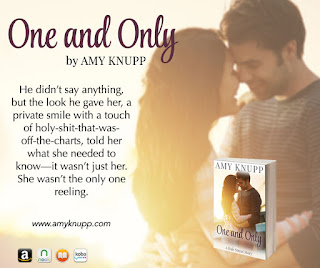 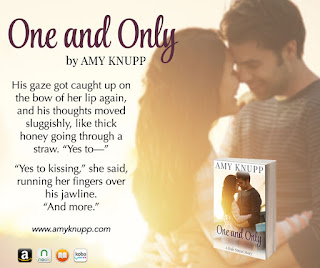 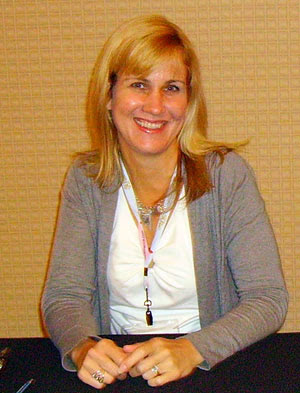 Amy Knupp is the author of contemporary romance, a freelance copy editor for Blue Otter Editing, and a freelance technical writer. While the collection of professional hats she wears sounds a bit scattered and broad, the common thread among all of them (perhaps the little ball on top of each hat) is the written word. She loves words and grammar and meaty, engrossing stories with complex characters.
Amy lives in Wisconsin with her husband, two teenage sons, four cats, and two box turtles. She graduated from the University of Kansas with degrees in French and journalism. In her spare time, she enjoys traveling, breaking up cat fights, watching college hoops, and annoying her family by correcting their grammar.
Author Links:   WEBSITE | FACEBOOK | TWITTER | GOODREADS

ONE AND ONLY is set on fictional Hale Street in Nashville, TN. I say fictional because most people would claim it isn’t real, but in the minds of me and my two series co-writers, Natasha Lake and Emily Leigh, it’s one hundred percent an actual place. It’s become a spot we’d all love to shop, live, and hang out in. For readers who are new to Hale Street, here are the top five things you should know:

1        Hale Street is one block long, located near downtown Nashville. Originally developed in the 1940s, the street is being redeveloped, with the goal of turning it into a shopping destination. Nick Morello, the lead contractor (who, by the way, is a treat in a tool belt) makes every effort to maintain historic details while making the buildings modern and functional. Brick sidewalks are lined with quaint, old-fashioned streetlamps, one-of-a-kind shops, and delectable food joints. Most of the buildings have apartments on the upper floors.


2        One of the cornerstone businesses on Hale Street is Clayborne’s on the Corner. With a Cheers-like familiarity for residents and a warm, welcoming atmosphere for visitors, it’s the perfect place to catch a ballgame on TV, an up-and-coming band on stage, or a tasty meal of a hot ham and Swiss sandwich, fried mushrooms, and an adult beverage. Hunter Clayborne, the current owner, is a feast for the eyes as well.


3        At the opposite end of the street is the majestic historical Wentworth Hotel, owned by Burke Wentworth, a man who does daily justice to a three-piece suit. The elegant ballroom hosts countless formal affairs, from wedding receptions to New Year’s Eve balls. The top floor houses long-term luxury suites in addition to the hotel’s impeccable regular rooms. The general manager of the hotel is Daisy Calloway, who, incidentally, used to be engaged to Burke.


4        No one can wander down Hale Street without stopping into Sugar Babies Sweet Shop. With a beautiful handcrafted front counter and a gorgeous bay window, it’s the ideal spot to savor a sinful sweet—peppermint-cocoa cupcakes, bourbon pecan pie bites, or anything with Ivy Gibson’s fluffy brown sugar icing on it, for example. An arched doorway connects the bakery to Angry Cat Books, where you can grab coffee and an absorbing book to go with your sweet treat.


5        As you meander along Hale Street, you might want to keep an eye out for the neighborhood kook, Lurlene Williams, and her leash-trained pet albino ferret. Lurlene is harmless enough, but making eye contact can subject a person to a lengthy anti-technology rant or an in-depth diatribe on pigeons. If she gets in front of you in line at Sugar Babies, prepare for her to ask the bakery girls about every single menu option before finally settling on her usual chocolate cupcake with chocolate frosting.


For more Hale Street details, I hope you’ll try ONE AND ONLY or any of the other six books set there (with more on the way). For more information on the books in the series, please visit my website (www.amyknupp.com).