REVIEW: IT HAPPENED ON LOVE STREET BY LIA RILEY 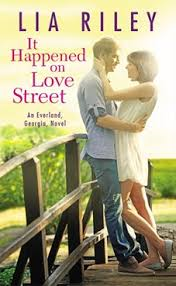 It Happened on Love Street (Everland, Georgia #1) by Lia Riley, Everland was only supposed to be a temporary stop on Pepper Knight's way to fulfilling her plan in become a successful lawyer. However, she never considered she'd be needing to find a job almost immediately when she arrives in town and discovers she's lost the position she had lined up before she even started. Luckily, the town vet comes up with a suitable job for her. The only thing is: she needs to interact with a handful of dogs. Sounds easy, but it's not. Besides, the more time she spends getting to know the people of Everland, the more she begins to find it hard to leave, even knowing leaving is what's best for her. Can Rhett Valentine, the man the townspeople dub 'Cupid' convince her to stay, or will she run away from the only man she could see herself settling down with?

I can't believe I've never read any of this author's books before, even though Ms. Riley's stories have been recommended to me several times. Now though, I can finally say that I've read something by her, and I've got to say that I'll be reading more, especially of this series. As this first book in her Everland series starts it off wonderfully, and had me riveted by the characters, the well-written dialogue and the fast-paced plot that had me reading this story in one sitting. The way this story started immediately had me wanting to know more about the heroine. Why has she moved to Everland? Why does she have a fear of dogs? What will happen to her now that her plans have fallen through for why she came to Everland?

The dialogue was a wonderful combination of intense and playful and I loved the history of Everland. It's a small town where plenty of interesting things have happened and the townspeople can be quite nosy. The elderly women of town love to tease the hero, and I enjoyed how he took it all in stride, despite the fact that he'd rather not have everyone in town know everything he does. Moreover, I could sympathize with the hero when it came to his relationship with his father. They didn't get along and Rhett is a huge disappointment. Luckily though, he has a wonderful sister that more than makes up for his father's attitude. But what I liked most about the hero was that despite the fact he didn't want a relationship after how his last one turned out, he begins to start thinking of a future with Pepper. Will she give him a chance? Will she finally put herself first before her family?

While Pepper, there were so many reasons to like her. She has a few decisions to make that aren't easy. Will she choose her family or Rhett? Will she give Rhett a chance when he finally decides to give a relationship between them a shot? Furthermore, I really enjoyed that she stepped out of her comfort zone when it came to the job she ended up taking. It wasn't easy for her after what happened in the past, but at least it helped her overcome her fear. However, what I liked most about the heroine is everything that happened to her, especially what happens to her at the river and the confrontation with a certain judge. Why did she have to be so stubborn in getting what she'd lost? Why is the judge so mean to her when she had every right to say what she says?

Overall, Ms. Riley has penned a wonderful read in this book, which made me laugh at times, had me smiling at others, and had me shaking my head towards the end. How could the heroine do what she does after what her sister says to her? Moreover, the strong chemistry between Pepper and Rhett spills over onto the pages in hot and detailed sex scenes and made me happy that these two gave each other a chance. Pepper needs Rhett, because she's always put those she loves first, but no-one seems to do the same for her until Rhett, even though she's very close with her sister and father. The way this story ended was perfect, as Pepper finally realized that her family didn't need her as much as she thought they did. They were moving on with their lives, and determined to look out for themselves more. I would recommend It Happened on Love Street by Lia Riley, if you enjoy second chance romances, small town romances or books by authors Marina Adair, Tessa Bailey or Lori Wilde.

BLURB:
The most romantic place she never wanted to be . . .

Pepper Knight moved to Everland, Georgia, as step one in her plan for a successful legal career. But after this big-city gal's plans go awry, going home with her tail between her legs isn't an option. So when the town vet-and her sexy new neighbor-offers Pepper a temporary dog-walking job, she jumps at the chance. No one needs to know that man's best friend is her worst nightmare... or that Everland's hot animal whisperer leaves her panting.

The last thing Rhett Valentine wants is to be the center of small-town gossip. After his first love left him at the altar, he's been there, done that. These days, life is simple, just the way he likes it. But sultry southern nights get complicated once sparks fly between him and the knockout next door. When she proposes a sexy, secret fling-all the deliciousness and none of the prying neighbors-it seems too good to be true. And it is. Because Pepper's determined to leave Love Street, and when she goes, she just might take his heart with her . . .
BUY LINK:  Amazon
at 18:30