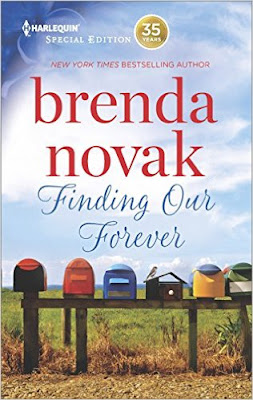 In Finding Our Forever (Silver Springs #1) by Brenda Novak, all Cora Kelly wanted to do is find her birth mother after years of not knowing why the woman that gave birth to her gave her up for adoption. Getting a job at the ranch her biological mom, Aiyana, runs for troubled boys in need of turning their lives around is easy enough, but telling the woman that she's her daughter isn't. With every day that passes, Cora finds it harder and harder to tell her secret, even to Elijah Turner, the man she's growing close with. Will she find a way to break her news to those she's come to care about gently, or will Elijah and Aiyana never knowing the truth be for the best?
Ms. Novak never ceases to amaze me whenever I read one of her books, and this story starts her new Silver Springs series off wonderfully. Right from the beginning, this story grabbed my attention completely, because of what Cora is going through. She wants to meet her birth mother; a woman who she has a lot of questions for. How could the woman give her up at birth, yet have so many adoptive sons? Why did she give Cora up in the first place? However, I could understand why Cora was so hesitant to tell anyone who she really is. She's already been abandoned once by her biological mother, what if it happens again?

As for the dialogue, it was well-written and had me hooked due to the main characters back stories, all these two go through on their journey to happy ever after and this couple's growing relationship. Elijah had a tough childhood with his parents treating him badly, and I could understand why he found it hard to trust and why a certain secondary character warned the heroine to be careful in getting in too deep with him. Because there was a chance that both could end up getting hurt, if their feelings for each other reached a level that one of them couldn't handle, since neither was looking for a serious relationship with Cora leaving once her contract was up.

Both the main characters were compelling, and I loved every moment they conversed. The heroine faces some tough obstacles on her journey to happy ever after such as the problems her ex causes, keeping her secret from those she's coming to care for and whether she's going to give Elijah a chance, but I was pleased by the decisions she did make because Elijah needs her just as much as she needs him. Moreover, Cora is strong and brave with what she's doing in wanting to get to know her biological mother, even though she knows how much it'll hurt her adoptive parents, if they learn that she wants to meet the woman that gave her up. She's also kind, caring and I liked how hard she worked to keep everyone happy, especially her adoptive parents and the kids she's determined to help at the ranch.

While Elijah, he had it tough growing up and it's understandable why he has such a close relationship with Aiyana and his brothers after all that's she done for him and the troubled boys that come to the ranch as well as all that his adopted brothers have been through. The hero is also hard-working, not afraid to tell it like it is, and I liked how protective he was of the heroine. No way was he going to allow someone to keep harassing her when it was palpable she wasn't interested. But what I liked most of all about the hero was how determined he was to win the heroine's heart, because how can he give up on a love that's meant-to-be.

Overall, Ms. Novak has penned a delightful read in this book that had me smiling throughout this story, but brought tears to my eyes in the end. The chemistry between Cora and Elijah is off-the-charts from the moment they come face-to-face for the first time and just keeps getting stronger, especially when Cora doesn't know what she wants and the struggles she faces in keeping her secret. If she gets in too deep with Elijah, she'll have to tell him the truth about who she is. Is she prepared to do that and deal with the consequences? The way this story ended had me hoping for the best when it came to the truth about Cora coming to light. Will Aiyana be able to handle Cora's news when the heroine is a reminder of a painful time in her past? However, it was the epilogue that wrapped this story up perfectly with how things have turned out for Cora. Certainly, she and Elijah deserve the happiness they've found together. I would recommend Finding Our Forever by Brenda Novak, if you enjoy books by authors Robyn Carr, RaeAnne Thayne or Susan Mallery.

BLURB:
New York Times bestselling author Brenda Novak welcomes readers to the town of Silver Springs, where surprises wait around every corner!
The search for her birth mother brought Cora Kelly to the New Horizons Boys Ranch. Getting a job there was easy enough, but confiding in Aiyana, the ranch's owner, that she's really her daughter? Cora's not sure she can do that, not unless she's confident the news will be welcomed. And once she gets to know Elijah Turner—Aiyana's adopted son and ranch manager—that decision becomes even more difficult.
Although Elijah can't deny his deep attraction to Cora, he's always struggled with trust. Anyone with his past would, and there's something about the ranch's newest employee that isn't exactly as it seems. But if the feelings she awakes in his guarded heart are any indication, she might be just what he's long been waiting for.
BUY LINK:  Amazon