REVIEW: DANCING IN THE RAIN by KELLY JAMIESON 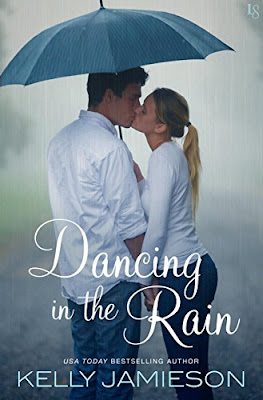 In Dancing in the Rain by Kelly Jamieson, Peyton Watt hates knowing her sister is going to die from cancer, but what else can she do but be strong for the woman that's always been there for her. However, Peyton never thought she'd fall for the gorgeous, broken man that her sister once had a one-night stand with and who happens to be the father of her niece; the father she didn't know until now. Will Peyton do what's right for her niece when the time comes, or will her love for her career take her away from the man she's falling in love with?

When I started reading this story, I thought to myself, this is a story that readers are either going to really enjoy or they won't. Do you want to know why? Because this story is quite an emotional read due to what's happening with the heroine's sister, and not every reader can handle a good cry session when it comes to reading. They prefer to read for pleasure, the happy ever after they know the main characters are going to get eventually, not fight through the tears that are bound to spill. Yet, I found once my tears dried up and I got to the moment where the heroine and his daughter will need the hero more than ever and to the moment where the hero realizes that nothing that's happened in his life is as significant as what Peyton and his daughter are going through, that this was a fantastic read I could not get enough of.

The dialogue was emotional, intense and it was hard not to cry for the heroine and her niece. Knowing her sister is going to die is hard to cope with, especially when her sister was such a rock growing up. The one that was always there for her and Peyton is determined to be the same for her sister. Certainly, it's not fair and the heroine has some big decisions to make. Will she take her niece away from Chicago to live in New York where she has no friends and has to start at a new school? Will she take her niece away from the father she's only just getting to know? However, the dialogue wasn't all intense. Lucky for Drew, Peyton sees beyond the hero's need to have a pity party for one. There were certainly moments that had me smiling such as the heroine challenging the hero when it comes to getting to know his daughter and what the hero does for his daughter at her school. How could he not want to get to know such an amazing young and bright girl?

As for the hero, the only life Drew has ever known centered around his hockey career, and I could understand why he acts the way he does having lost such a great career. It makes him seem selfish, but he certainly redeems himself with everything he does for Peyton. What is he going to do now that he no longer has hockey? Will he be able to find a job that will benefit whatever skills he has? Moreover, I liked the growing relationship he had with his daughter. It was hard for him not to love such an incredible young girl who is wicked smart and does a lot of good. Does the hero make some bad decisions? Absolutely, but they're certainly ones that can be fixed, if he can find a way for the heroine to forgive him.

Overall, Ms. Jamieson has penned a gratifying, heartfelt read in this book that had me in tears at times, but left me with a smile at the end. Because after everything this couple go through, no one is more deserving of happy ever after than these two. The chemistry between Drew and Peyton continued to build throughout this story, and spilled over onto the pages in scorching sex scenes that illustrated love is possible, even when you're grieving and needing to make the hardest decisions a person ever has to make. The way this story ended was wonderful, as Drew made things right with Peyton and finally discovered what his future held in terms of a career. However, it was the epilogue that wrapped this story up perfectly with the surprise Drew had for Peyton. Luckily, he had some help by those that love Peyton too. I would recommend Dancing in the Rain by Kelly Jamieson, if you enjoy second chance romances or books by authors Sawyer Bennett, Toni Aleo or Lisa B. Kamps.

BLURB:
Happily ever afters aren’t just for fairy tales. In this heartfelt novel, a retired athlete must become a father to the daughter he never knew—just as he discovers the power of love with a woman who reignites his passions.

Drew Sellers is drowning in broken dreams and empty beer bottles. Hockey was his world, until a bum knee reduced him from superstar to has-been. Then he learns that, thanks to a one-night-stand back in college, he’s the father of a preteen girl with major issues. Her protective aunt sees right through Drew’s BS, but “Auntie P” is no stereotypical spinster. With her slender curves, toned legs, and luscious lips, she has Drew indulging in fantasies that aren’t exactly family-friendly.

At another point in her life, Peyton Watt would have been all over a cocky alpha male who pushes all her buttons like Drew. Right now, though, she needs to focus on taking care of her niece during her sister’s health crisis, all while holding down a job and keeping her own head above water. Besides, Drew’s clearly no father of the year. He’s unemployed. He drinks too much. And he’s living in the past. But after Peyton gets a glimpse of the genuine man behind his tough-guy façade, she’s hooked—and there’s no going back.
BUY LINK:  Amazon