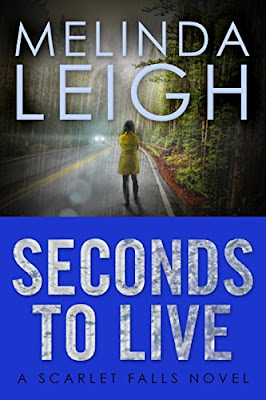 In Seconds to Live (Scarlet Falls #3) by Melinda Leigh, returning to Scarlet Falls brings back bad memories for Mac Barrett; bad memories he's tried so hard to run from. But he knows there's no way he can't return, not when his father is dying. However, when he arrives in Scarlet Falls, he finds he's too late to say goodbye to his dad. To help deal with the lose, Mac decides to insert himself into the investigation of finding the person responsible for kidnapping and torturing women and then killing them. Will he be able to help Police detective Stella Dane capture the killer, or will he be another person for the killer to target?

What I love so much about Ms. Leigh's books is that she keeps me guessing as to who the killer is from start to finish. Right from the start, this book had me hooked because of what the victim is going through and I wanted to know what would happen to her. Would she escape? What would the killer to do her? Why is he kidnapping the women that he does? Are they linked somehow? However, this book became even more attention-grabbing once the hero and heroine were introduced. Stella has a distant connection to the first victim that doesn't make it easy for her to handle the fact that the woman is a victim, but it gives her incentive to want to desperately solve the case and I liked her dedication to her job.

As for the dialogue, it was intense due to the main characters back stories and what this couple go through with the investigation into finding the person responsible for the horrible crimes being committed. Mac has never been able to forgive himself for what he put his family through when he was younger, and it has made him keep his distance from his family. Will he finally forgive himself for the past? Can Stella help him find a way to be close with his siblings again? However, it was the investigation that really made this story interesting, because it seemed unlikely that Stella was going to solve this case until something big happened. Something none of them thought would happen, because Mac and Stella are both capable of protecting themselves.

Both the main characters had me completely engrossed with their back stories. Mac is keeping a huge secret from his family; a secret concerning his career, a career that could earn him redemption from his past, if he does enough good. Will telling his family finally help bring him closer together with his siblings? Will the truth finally set him free of the past? Moreover, I liked how protective of the heroine Mac was, even though she doesn't need protection. But with everything that happens and how the killer taunts her, I could understand why he felt the need to help the heroine as much as he does. While the heroine, she's strong, brave and I liked how determined she was to not let what happened during her last investigation affect her too much. I also liked how persistent Stella was to make sure she had the right person responsible for the crimes, considering what the UNSUB does to try and get under her skin.

Overall, Ms. Leigh has penned another fantastic romantic suspense in this book where the strong chemistry between these two also had me flipping the pages quickly, determined to discover how things would work out for the hero and heroine. Especially since the ending kept me on the edge-of-my-seat with its suspense, due to what happens to one of the main characters. But what I liked most is how this story illustrates how right Mac and Stella are for each other, and that maybe Stella does need saving sometimes. How can the heroine be scared by a creature Mac's nephew has when it's not even poisonous? I would recommend Seconds to Live by Melinda Leigh, if you enjoy romantic suspense or books by authors Kendra Elliot, Cate Beauman or Laura Griffin.

BLURB:
Wildlife biologist Mac Barrett avoided his hometown of Scarlet Falls for years—too many bad memories. But when he receives the news that his father is dying, he rushes home only to discover he’s too late. Shaken, Mac retreats to his remote cabin seeking peace and solace. Instead, he crashes his jeep to narrowly avoid running over the naked body of a woman lying in the road. Even more disturbing, when he regains consciousness, the body is gone.
Police detective Stella Dane wants to believe Mac, even if his story about the vanishing body seems far-fetched. But when Mac’s description matches the missing woman she’s been searching for, it raises a disturbing question: How does a dead body disappear?
Mac and Stella will have to work together to find the answer and catch a psychotic kidnapper—and quickly. The killer has a deadly message to send, and the case is about to become personal…
BUY LINK:   Amazon