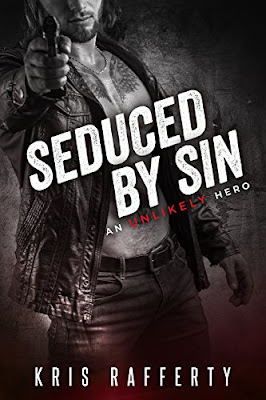 In Seduced by Sin (Unlikely Hero #3) by Kris Rafferty, Caleb Smith will do anything to succeed in his mission of taking down Francesca Hamilton's father, even if it means seducing her in hopes of securing her help. Except Francesca doesn't know anything about her father's 'business' dealings, and the longer Caleb stays in the game determined to complete his mission, the more dangerous things become for both he and Francesca. Can he keep her safe and win Francesca's heart, or will the secrets he's keeping when discovered tear them apart?

Although I haven't read the other books of this series, I absolutely loved this story, because of the astonishing plot twists that had me on the edge-of-my-seat with worry for both the main characters safety. Would Caleb be able to protect Francesca? Would the heroine finally win the love of her father? The way this story started set the fast-pace of this book, as Caleb desperately needs Francesca, if he's to have any chance of succeeding. How far is the hero willing to go? Will he be the man who wins her when her father demands her to do something she doesn't want to do, so that she can continue to live her life the way she is, instead of having to run the family company?

Both the main characters had me hooked by their back stories, all that they go through on their journey to happy ever after and their growing relationship. Dangerous times call for desperate measures, and making sure Francesca is safe and securing her help has to be done, even if Caleb has to declare himself in the running for what her father demands of her. However, secrets have a way of coming out and it made me feel sorry for Francesca, because even though her father doesn't treat her like a father should treat his daughter, she still believes him to be a good man.

Francesca is strong and brave by the way she stands up for herself, even if it doesn't seem she's getting through to the people she wants to such as her father and Caleb. She's also kind, caring, and I liked how determined she was to help people that needed her in her job as a clinical psychologist. Yet, what I liked most about the heroine was how she strives for her independence and that she can still manage to find moments to tease Caleb, even though she has some niggling feeling that there's something he's not telling her. While Caleb, he has his reasons for keeping his identity to himself, as it could not only get him killed but could also put the heroine's life in danger, which it does by what happens to her, knowing she's his weakness. Also, I liked how he takes charge when things go awry, as it goes to show he'll do anything to protect those he cares about.

Overall, Ms. Rafferty has penned a wild ride in this story, which kept me entertained with all the danger Caleb and Francesca face as well as their romance, which showcased their intense chemistry with plenty of fervor. The way this story ended was pulse-pounding and had me reading really quickly, wanting to know what would happen to Caleb and Francesca. Would Caleb's secrets put Francesca in more danger than she was already in because of her father? However, it was the last chapter that wrapped this story up perfectly, because Caleb had his work cut out for him to win Francesca back. Luckily, he knows just the right things to say. I would recommend Seduced by Sin by Kris Rafferty, if you enjoy romantic suspense, the fake relationship trope, or books by authors Laura Griffin, Cate Beauman, or Lena Diaz.

BLURB:
When Caleb Smith saved Francesca Hamilton from a nasty situation with her father, she was beyond grateful. Sure, it landed her in Caleb's bed wearing his engagement ring, but neither of them took that seriously. It was a means to an end, and he was so sexy and exciting, she was enjoying the ride. It wasn’t Caleb's fault her feelings were changing, leaving her wishing things between them were real rather than pretend.
Caleb took the FBI’s assignment because he wanted to end the tyranny of a man who’d hurt the people he loved. Odds of success were slim and the danger high, but he knew the risks. Francesca didn't and was completely in the dark about her family’s "business." And the more time he spends with her, the harder he falls for the gorgeous blonde. But to finally get retribution, he'll have to destroy her world...
BUY LINK:  Amazon
The An Unlikely Hero series is best enjoyed in order:
Reading order:
Book #1 - Betrayed by a Kiss
Book #2 - Tempted by a Touch
Book #3 – Seduced by Sin
﻿
at 21:13