Enter to Win a digital set of
Books 1 - 3 in the Mayhem series
(Mayhem, Riot and Chaos) 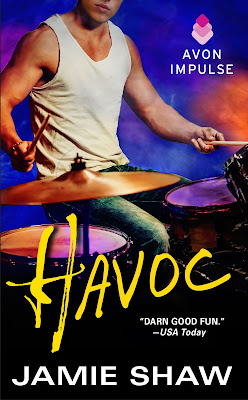 In Havoc (Mayhem #4) by Jamie Shaw, with her uncle paying her college tuition, Hailey Harper can't afford to irritate her cousin. Unfortunately, she lives with the woman and finds herself falling for her cousin's rock star ex-boyfriend. Can Hailey find a way to stay in college and have a relationship with Mike Madden, or will her cousin ruin her new relationship?
Although I haven't read the previous books of this series, I found this book could easily be read as a stand-alone. From start to finish, this story was entertaining, fast-paced and I enjoyed the tough obstacle this couple had to face to be together. The hero is the heroine's cousin's ex-boyfriend, and it isn't easy for her to fight her growing feelings for him. But when her cousin is determined to do everything to win the hero back, even if it means resorting to blackmail, it made me feel sorry for Hailey. Because if she chooses love over achieving her dream, she loses and if she chooses her dream over love, she loses the chance at forever after with Mike.
As for the dialogue, it was intense due to the main characters back stories, this couple's growing relationship and the moments where Hailey has to deal with her cousin. Her cousin is a nasty piece of work with the way she treats Hailey and some of the secondary characters. Will Hailey finally stand up for herself instead of continuing to allow her cousin to talk to her the way she does? However, there were also some really good light-hearted moments between this couple that made me smile. The hero and heroine share a love of video games, and I liked how they could tease each other while they play.
Mike was a fantastic hero, but the heroine frustrated me at times. Why did Hailey always allow her cousin to get away with speaking to her the way she does? I know she was worried about the possibility of not being able to finish her degree, if her cousin complained to her father (Hailey's uncle), but that's no excuse for not calling her cousin out on her verbal abuse. Yet, in saying that, I liked that the heroine found her backbone because love is the worth fighting for. While Mike, he faces a tough challenge when it comes to Hailey, because she's worried about the backlash if she pursues a relationship with the hero. Can he convince her to give him a chance? Can he prove to Hailey that there's nothing more important to him than her? Moreover, I liked that Mike was willing to fight for a chance with Hailey, and how he goes about proving how much she matters to him because nothing and no-one could keep him away from her.
Overall, this was a really good read where the strong romance does justice to the great chemistry these two have and how they shouldn't let anything stand in the way of being together. Moreover, I loved the secondary characters advice and the way this story ended, because enough was enough. No longer was Hailey going to allow her cousin to treat her the way she does. Although what Hailey does wasn't the best solution, it was effective in making her cousin realize that the heroine would no longer be intimidated into believing she'll lose the things that matter the most to her -- Mike and her chance to finish her degree. However, it was the epilogue that wrapped this story up perfectly, because of Mike's surprise for Hailey. I would recommend Havoc by Jamie Shaw, if you enjoy the forbidden relationship trope or enjoy reading books by authors Karina Halle, Melissa Toppen or Vivien Wood.
OVERALL RATING:

BLURB:
When Hailey Harper left her family farm to enroll in veterinary school, she had a plan: keep her head down, ace her classes, and most importantly... don't upset the uncle paying her tuition. Translation? Don't piss off his dramatic, self-absorbed daughter, Danica, even if she's a nightmare to live with.

Falling in love with her cousin's rock star ex-boyfriend was definitely not part of the plan.

As the drummer of a now-famous rock band, Mike Madden could have any girl he wants. He's sweet, funny, romantic, talented--and the only guy that's ever made Hailey's heart do cartwheels in her chest. The more she gets to know him, the harder she falls, but Hailey knows they can never be more than friends… because Danica wants him back, and she'll fight dirty to win.

Mike is falling for Hailey too, but Danica's threats and his rock star life-music video shoots, international tours, obsessed fans-could tear them apart before they've even begun. Hailey isn't sure she's the one for him, but Mike's waited years for a girl like her… and he'll do anything to prove it.

At a door near the back corner of the room, my fun-loving cousin marches right up to the first security guard she sees, who also happens to be approximately five zillion times her size, with muscles made of stone and a face to match. “Who do I need to talk to to get backstage?”


At her bossy tone, Muscle-man lifts an eyebrow. “The Easter Bunny?”
“Excuse me?”
“No one’s allowed backstage.” The arms he crosses over his chest warn that he isn’t messing around.
“I’m with Mike,” Danica lies, and after studying her for a moment, Muscle-man laughs.
“Sure you are.”
“I am!”
When Muscle-man just smiles at her like she’s a petulant child, Danica resorts to acting like one. She demands to see his boss and threatens to get him fired. When that doesn’t work, she resorts to curse words. And when those have no effect, all hell breaks loose.
She’s torpedoing her finger into his chest and shouting something about his inbred gene pool when I try to pull her away from him. But Danica is on a rampage, and all my efforts get me is a hard shove that nearly knocks me on my ass. At five-feet tall, one hundred and three pounds, I’m not exactly in a position to throw my weight around, and I don’t make a second attempt to try. I’m rubbing my tender collarbone when the security guy picks my assailant up off her feet, and I helplessly follow as he carries her outside.
After serving as an armrest for a sweaty gigantor inside the club, after obliterating my eardrums in front of the world’s biggest speakers, after getting knocked around like a bratty child’s toy all night, all I want is to take a hot shower and crawl into my own bed to sleep for a week straight. Instead, I stand on the sidewalk outside of Mayhem, frowning at the furious look on Danica’s face as she glares at the big metal door the security guard just shut behind him.
She came here for one thing, and I know she’s not leaving until she gets it.
“You didn’t have to push me,” I mutter, and her eyes flare.
“You should’ve had my back!”
“And done what? Bite his ankles?”
In her four-inch wedge boots, Danica towers above me. I stare way up at her, trying to remember the girl who played dolls with me up in my parents’ hay loft. But she’s lost somewhere behind fake lashes and fifteen years of getting everything she's wanted.
“You’ve been nothing but a bitch this whole time,” she snaps, and I sigh and pull my shirt away from my skin again, letting the cool night air dry the sweat beaded on my lower back. There’s no point in trying to defend myself. In Danica’s mind, she’s always simultaneously the victim and the hero, and as her non-rent-paying roommate, I’ve learned to just accept that.
I appreciate everything she’s done for me. I do. If she hadn’t been the little voice in her father’s ear, persuading him to fund my schooling and begging him to make some calls to get us enrolled, I’d be home mucking stalls, not following my dreams. Her dad pays all of my bills—my tuition, my insurance, my living expenses, all of them. And while I suspect that Danica’s sudden interest in my life wasn’t entirely genuine—she’d flunked out of college before, and I think her dad was only open to the idea of her going back if she was living off-campus with a responsible roommate, AKA her boring farm-girl cousin—I owe her. I owe her the roof over my head and the massive student loan debt I don’t have.
When her phone rings, she wastes no time dismissing me to answer it. “Katie?” she says. “Guess who just got kicked out of the fucking club. Yes! Because this asshole bouncer wouldn’t let me backstage.” She gives me a dirty look. “Just stood there doing nothing. I know! No, she didn’t even try. Getting a place with her was stupid.”
An icy chill slithers up the back of my neck, and I chew the inside of my lip. Because of my uncle’s insistence that I focus all of my energy on school right now instead of also finding a part-time job, I have no income. My only “job” is not pissing off his daughter. And it’s a job that I’m learning I am very, very bad at.
With my mouth shut, I slink away before my mere presence can enrage Danica further, and when she asks where I’m going, I make up the lamest excuse ever. “To read this flyer over here.” 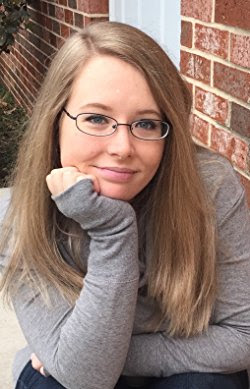 A resident of South Central Pennsylvania, JAMIE SHAW's two biggest dreams in life were to be a published author and to be a mom. Now, she's living both of those dreams and loving every minute of it. When she's not spending time with her husband and their young son, she's writing novels with relatable heroines and swoon-worthy leading men. With her MS in Professional Writing and a passion for all things romance, her goal is always to make readers laugh, cry, squirm, curse, and swoon their pants off, all within the span of a single story. She loves interacting with readers, and she always aims to add new names to their book boyfriend lists.
Author Links:   WEBSITE | FACEBOOK | TWITTER | GOODREADS