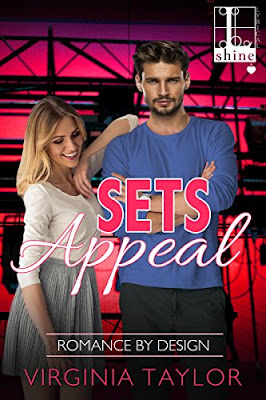 In Sets Appeal (Romance by Design #1) by Virginia Taylor, for the first time in her life, Vix Tremain is determined to leave the past behind, especially her no good ex-husband and succeed in becoming an independent woman who doesn't need a man. She's off to a good start with her first ever job, even if it's only as a theatre painter, but what she really needs is to regain her confidence. Can she convince the set construction manager into having a no strings fling?

Ms. Taylor is a new-to-me author, but when I saw the cover of this book I really wanted to read it. Even more so, this story is set in my home country, so that also along with the blurb were other reasons I wanted to dive into this story, and I've got to say that it does not disappoint. First off, the play on words of the title (Sets Appeal / Sex Appeal) definitely does justice to the hero and the other male characters of this story, because they certainly sound appealing by their ruggedly handsome descriptions; and the story itself, as it encompasses a couple that are designing a set for a production. The way this story started had me hooked right away, as I wanted to know how things would progress between the hero and heroine. Would she feel comfortable enough with JD to have a fling? Why is she so nervous when it comes to getting up close and personal with the hero in the beginning?

The dialogue was intense due to the main characters back stories, and I could sympathize with the heroine after all that she went through with her ex-husband. He's made her feel so insecure when it comes to intimacy and relationships that I could understand why she is the way she is with the hero. Yet, at the same time, it did annoy me a little, because it was palpable the hero was determined to prove she had nothing to worry about. That she can have a wonderful time in the bedroom, if she's willing to let the hero get a tad creative, instead of settling for mediocre measures that leave her unsatisfied.

Both the main characters were riveting, and so were the secondary characters, even Ilona. Although, her fascination with the hero got to be a bit too much. Doesn't she realize that they'll only ever be friends? As for the heroine, she's been through a lot due to her ex-husband, but she didn't allow him to keep her down for long. Certainly, she begins to shine again, become more confident and I liked that she fought for what she wanted when it came to her relationship with JD and the conflict it created with her father. Would Vix believe the hero when it came to the information her father knew about him that she didn't?

While JD, he was a fantastic hero that I could not get enough of. He's supportive of the heroine's dreams and what she's accomplished after her marriage split. Certainly, she's not what he imagined of a rich girl who hasn't worked a day in her life until now. Instead, she impressed him with her determination to succeed and how much she loves her work. She's just like him in that respect, as he too, is hard-working and determined to achieve his own dream, which was derailed by an incident concerning someone the heroine was once close to.

Overall, Ms. Taylor has penned a really good read in this book where the chemistry between these two is wonderfully written and shows how right this hero and heroine are for each other. The way this story ended had me cheering for this couple's happy ever after, as no one deserves a second chance at love more than the heroine and it's palpable that this time around everything will work out for the better. Since I doubt JD would ever wrong the heroine like her ex did. However, it was the epilogue that wrapped this story up perfectly, as I loved the playful banter between the main and secondary characters and the way JD's brothers have such respect for the heroine considering her family name. Who would give a child the name they were talking about? I would recommend Sets Appeal by Virginia Taylor, if you enjoy second chance romances or books by authors Stacy Finz, Darcy Burke or Melanie Shawn.

BLURB:
In the cosmopolitan coastal city of Adelaide in South Australia, two theater lovers create a little drama of their own . . .

Twenty-seven-year-old divorcée Vix Tremain finally has her first job—as a theater-set painter—and is ready to leave the past behind. What better way to get her confidence back than a fling with a handsome stranger? She isn’t looking for anything emotional, she’s had enough heartbreak. Rugged Jay Dee, the set construction manager, fits the bill for no strings fun perfectly. What Vix doesn’t realize is that Jay is not exactly a stranger . . .

Jay would recognize wealthy, spoiled Vix anywhere. After all, she’s the ex-wife of the man who destroyed his career. Naturally, Jay wants a little sweet revenge—at first. To his surprise, Vix is far from the ice princess he expected, and spending time with her changes everything. Soon he realizes he’s actually falling for the vulnerable beauty. But becoming entangled with her will mean revealing who he is—and opening them both up to more pain. With their dreams at stake, is their connection strong enough to weather the truth—and take center stage?
BUY LINK:  Amazon
at 12:19