REVIEW: TO ME I WED by KM JACKSON 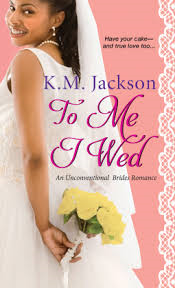 To Me I Wed
Unconventional Brides #2
By: KM Jackson
Releasing April 25th, 2017
Dafina
+ Add to Goodreads

In To Me I Wed (Unconventional Brides #2) by KM Jackson, with her sisters getting married one-by-one, Lily Perry is feeling the pressure from her family to find her Mr. Right. Except Lily is happy with the way her life is, so why does she need a man to make her life more fulfilled? Instead, she concocts a plan to marry herself and goes through with organizing everything from the dress to where the ceremony will be held. However, she never anticipated Vincent Caro getting under her skin and make her question what she's doing. Can Vincent convince her that love is worth the risk, or will she continue to fly solo when it comes to relationships?

Although I haven't read the first book of this series, I found I could easily read this story as a stand-alone. From start to finish, this book was entertaining, fast-paced and I liked that it had such a unique plot of a woman wanting to marry herself, even though it did seem a bit outlandish. How does one go about marrying themselves? Is it even possible? Why would she want to marry herself? The way this story started had me feeling sorry for the heroine, because of how her family thinks she needs the kind of happiness they've all found in her life. Will they try and set her up with someone?

The dialogue had me hooked, and I enjoyed every moment the hero and heroine interacted, whether they were at odds because the hero couldn't understand why she'd want to marry herself or whether they were getting along. Moreover, I enjoyed the heroine's stubbornness, her need for not conforming to what her family wants for her, the way she interacts with the hero and her fight to do what she believes is best for her. Because if she doesn't marry herself to prove that she loves herself, then how could she expect anyone else to love her enough to commit to a relationship.

However, in saying that, I liked how difficult it was for her. The way the heroine struggled to decide whether she'd go through with the wedding, as she got closer and closer with Vincent. Which indeed, made me sympathize with the hero, because her decision to marry herself wasn't easy for him to accept. While the hero, he's hard-working, tenacious and I liked how he wanted to honor his mother in everything he did with making his dreams as a chef and having his own restaurant come true. Seriously, he shouldn't doubt how proud his mom would be, even though she's not with him to see how his life has turned out. But what I liked most of all about the hero was how he supported and helped the heroine, despite how he felt about her wanting to marry herself in the beginning. Not that I could blame him, as it seemed like her decision was an asinine idea to start with.

Overall, this was an enjoyable read where I loved how Lily's grandma wasn't afraid to give her advice when it came to Lily giving Vincent a chance and I also loved how there was plenty of chemistry between this couple that deserved to be explored. The way this story ended had me concerned for one of the secondary characters, but I was pleased by how everything turned out for Vincent and Lily. Certainly, after what happened, it goes to show both the hero and heroine that love is worth fighting for. I would recommend To Me I Wed by KM Jackson, if you enjoy stories with unconventional storylines, second chance romances or books by authors Tina Martin, Farrah Rochon or Rochelle Alers.

BLURB:
Have your cake—and true love too...


She's done, finished, had it. Between her family’s expectations and being always-a-bridesmaid, Lily Perry is fed up with being nagged to find a husband. She's happy with her life—and tired of being burned by “nice guys” who demand she fit their dreams. So she’s going to settle the issue once and for all: by marrying herself. And celebrated chef Vincent Caro's fabulous restaurant is the perfect place for a big-time, blow-out, not-hearing-it-any-more wedding. Lily doesn't care if everyone—including Vincent—thinks she's crazy. Especially when his mouth-watering talent and no-commitments style ignites one sizzling, no-strings fling, or two…or more.

But no matter how hard they try to keep things light, their relationship keeps getting hotter. The more Vincent helps Lily tackle unexpected trouble, the more he finds she might be everything he’s ever wanted. Can she afford to forget caution and finally let go? And can they both take a risk to discover if what they have is meant to last long after the dessert course?
BUY LINK:  Amazon
at 17:12