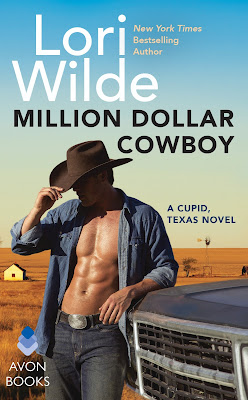 In Million Dollar Cowboy (Cupid, Texas #5) by Lori Wilde, Ridge Lockhart wouldn't return to Cupid, Texas without a good reason, especially after what his ex and father did to him. But with his best friend getting married, there's no way he'd miss out on the celebration. However, Ridge didn't expect his best friend's younger sister to be all grown up and gorgeous. Can he forgive those that wronged him in the past to have a chance at a future with Kaia Alzate, or will his need to prove he's more successful than the man that's always made him feel like an outsider in his family keep them apart?

BLURB:
New York Times Bestselling Author Lori Wilde returns to Cupid, Texas with a heartwarming story of a cowboy who comes home to the family ranch for a wedding filled with surprises…

The illegitimate son of a Texas ranching dynasty, Ridge Lockhart left home ten years ago with one goal: to become more successful than the father who never accepted him.

Mission accomplished, but now he’s back at the Silver Feather Ranch for a wedding—three days of best man duty until he can hightail it out. Then he spies Kaia Alzate, and suddenly leaving isn’t quite so appealing.

Kaia Alzate grew up the daughter of the ranch foreman, servants to the mighty Lockharts in the mansion. Back then, she followed Ridge around like a puppy. Now, she’s fighting the attraction she feels for this sexy CEO. She’s determined not to make a big mistake—but when Ridge takes her in his arms she’s stunned…could he be the man she’s waited for all along?
Buy Links:   AMAZON | B & N | GOOGLE | ITUNES | KOBO

At this distance, with the width of the landing strip between them, he hadn’t gotten a clear view of her face, but his initial impression was that she was more pretty than beautiful, while her body language exuded a come-sit-by-me friendliness that drew him. She was curvy enough to let him know that she enjoyed a good splurge meal now and again, but she was also healthy and fit. Her skin was tan and supple, her eyes soft and bright, her teeth straight and white. She took good care of herself.
But it was the way she carried herself that totally wrecked him. Confidence mixed with humility. She had an authentic stride full of wholehearted openness. The last person he’d known who’d possessed that special combo was Archer Alzate’s kid sister, Kaia.
He hadn’t seen Kaia face-to-face since she was sixteen and she had attended his and Archer’s graduation from the University of Texas. But two years ago, Archer called him to tell him that while working on her doctorate in veterinarian medicine at Texas A&M, Kaia had been in a terrible car accident and fractured her pelvis. Ridge had flown straight to College Station to see her only to discover she was in a medically induced coma.
The waiting room had been packed with her family and friends, and no one noticed him standing in the doorway. After so much time away he’d felt awkward and misplaced, an outsider. Not wanting to turn Kaia’s accident into a stage for his return, he’d slipped quietly away without speaking to the family. But later he texted Archer to meet him in the parking lot to get an update on Kaia’s condition. Archer gave him the rundown, including the fact Kaia had such a high medical deductible he didn’t know how she was ever going to afford to finish her degree.
Once Ridge knew she was stable and going to pull through, he went to the business office, anonymously paid the fifteen-thousand-dollar deductible toward her medical bills, and swore Archer to secrecy.
Later, when she was out of the coma, he sent flowers and a card and he’d gotten back a kind thankyou note, and their correspondence had ended there. Archer kept his word and Kaia never knew Ridge had come to see her or that he was the one who paid her deductible.
Ridge slipped off his sunglasses for a clearer look at the provocative woman. From the back seat of the Tundra, she extracted an oversized present wrapped in gold foil. The package was so big and the backseat so small. How she’d managed to cram it in?
She tossed her head, a triumphant smile on her face, and turned in his direction. Their gazes met across an empty desert.
For a split second, his heart stopped.
Her obsidian eyes arrested him, a mysterious color that suggested hot summer nights and low, deep-throated whispers. Ripples of recognition jolted his nervous system, both shocking and exhilarating. He knew her.
Kaia Alzate.
Freakadilly circus, he’d been lusting after little Kaia Alzate. Hot for the girl he’d once dubbed the Braterminator.
Ridge coolly slipped his sunglasses back down over his eyes. She’d pestered the hell out of him and Archer when they were kids. Tagging along everywhere they went, tattling if they stepped out of line, and generally being a run-of-the-mill pain-in-the-ass. He might have hidden his eyes from her, but he couldn’t hide the goose bumps spreading over his skin, pushing an insistent heat into his bloodstream as he watched her from behind the safety of the polarized lenses of his aviator Ray-Bans.
Her snapping black eyes sparkled with glee, as an enthusiastic grin split her mouth wide. She had recognized him too, and she looked more than happy to see him.
His gut dove the way it did whenever he’d practiced a stall in pilot training, spinning, whirling, and hurtling headlong toward the earth.
Thank God her hands were full because he had the distinct impression that if she’d been empty-handed, she would have come flying across the tarmac to hug the stuffing out of him.
He didn’t mean to do it, told himself he wasn’t going to do it, but damn if he couldn’t help sliding his gaze over her body. After all, she had no idea what his eyes were doing behind the sunglasses.
Thank you, Ray-Bans.
She moved toward him, arms strapped around the oversized present. Stopped. Cast a glance over her shoulder at the main house. Swung her gaze back to him. She wanted to come over, but didn’t seem to know what to do with the package.
He kept his face unreadable, but gave her a respectful nod. I see you, but no need to rush or gush or make a fuss.
Deliberately, he turned away, telling himself it was to chalk the plane’s tires, and it had nothing to do with the fact his chest was tight and his head fuzzy. And a smile he could not stop was pushing across his face.
He was happy to see her too. So happy it freaked him out.
Once the chalks were in place, and he reined in his galloping pulse, Ridge raised his head, ready to dish up a slick greeting.
But she was gone.
Yay. Great. Perfect. He’d avoided her exuberant hug. Good work.
Why then, did he feel so bummed? 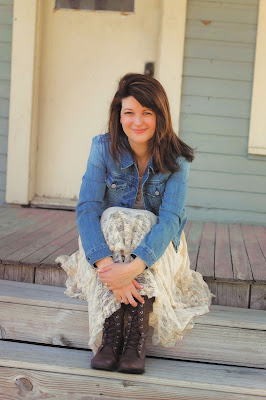