REVIEW: TOO HARD TO FORGET by TESSA BAILEY 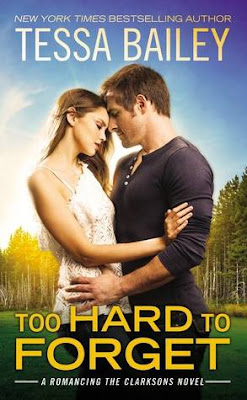 In Too Hard to Forget (Romacing the Clarksons #3) by Tessa Bailey, Peggy Clarkson has never been able to get over Elliott Brooks. But after he broke things off between them three years ago, Peggy is back in Cincinnati and ready to show the gorgeous man just what he's been missing. Except this time, they'll part ways on her terms, so she can finally put the past behind her and find the kind of happiness she deserves. However, it seems the only person that could possibly make her happy is Elliott. Can Elliott find a way to convince Peggy to give him a second chance?

This is the first book I've read by Ms. Bailey, and it was a book I really struggled to get into at the beginning. Yet, I'm so glad I persevered through, because in the end I really enjoyed it. At the start, I thought the heroine was a bit too straight-forward, believing she could have whatever she went after, because of her looks. Indeed, I agreed with what the hero's daughter calls her at one point, which might make me seem judgmental, but it did feel like the truth at the time. Really, the heroine frustrated me until she told Elliott the truth of why she's returned to Cincinnati and then began to do something good that showed her how selfless she can be.

The dialogue was intense due to the history between these two. When they were together in the past, their relationship was forbidden and Elliott should have known better than to get involved with Peggy. However, in saying that, Peggy didn't make things easy for the hero to resist her and she still does so in the present. Will he give in? Will he let her go? Will he finally realize that she's the woman he wants in his life forever? Although, I didn't like Elliott in the past, because he seemed selfish to me with him being more concerned about his career than his family life. Yet, I really liked Elliott in the present once he realized that it's not too late to have the kind of relationship he wants to have with his daughter. No way can he continue to ignore her the way he does without their becoming a permanent rift between them further down the track.

In the end, I'm really glad I didn't give up on this book at the quarter way mark like I had planned, because it was a really good second chance romance, where the sex scenes were fan-your-face hot and illustrated that the only man that could give Peggy what she liked in the bedroom was Elliott. The way this story ended kept me turning the pages, as I wanted to know whether the hero had the courage to deliver on the promise he made to the heroine about a certain speech she wants him to make. Can he do it? However, what I really liked about the ending is the words Elliott says to the heroine, because it's palpable no one will love her as much as he does. I would recommend Too Hard to Forget by Tessa Bailey, if you enjoy scorching hot reads that encompass the second chance romance trope.

BLURB:
This time, she's calling the shots.
Peggy Clarkson is returning to her alma mater with one goal in mind: confront Elliott Brooks, the man who ruined her for all others, and remind him of what he's been missing. Even after three years, seeing him again is like a punch in the gut, but Peggy's determined to stick to her plan. Maybe then, once she has the upper hand, she'll finally be able to move on.

In the years since Peggy left Cincinnati, Elliott has kept his focus on football. No distractions and no complications. But when Peggy walks back onto his practice field and into his life, he knows she could unravel everything in his carefully controlled world. Because the girl who was hard to forget is now a woman impossible to resist.