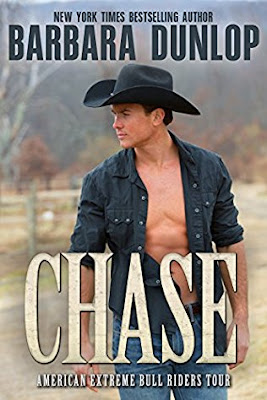 In Chase (American Extreme Bull Riders Tour #2) by Barbara Dunlop, after being betrayed by those he should have been able to trust, Chase Garrett joined the American Extreme Bull Riders Association in hopes of getting over the pain of the betrayal. However, riding bulls isn't the only thing to bring him happiness after saving the life of a young boy who believes Chase is his daddy. Will he be able to convince the boy's mother, Maddy Barrett, to give him a chance?
This was quite an intriguing story Ms. Dunlop has penned in this second book of the American Extreme Bull Riders Association series, encompassing a heroine needing to find a way to help her son deal with the loss of his father; a hero determined to find a way to convince the boy he rescued that he's not his father without having the boy think he's the bad guy; and a wonderful array of secondary characters in the heroine's brothers. Brothers that are a little overprotective and don't want to see the heroine hurt. The way this story started had me feeling sorry for the heroine, because her son is so young and missing his father. Will she find a way to get through to him?
As for the dialogue, it was hard not to sympathize with both the main characters when it came to their back stories and all that they go through to achieve happy ever after. Chase was badly hurt by what his best friend and fiancée did to him, and it's understandable why he doesn't want to give forever after a chance. Yet, I liked that the hero was willing to do whatever it takes to help Maddy with her son, even if it means telling a white lie until Maddy's son is ready to hear the truth. It shows how kind and considerate Chase is, and how much Maddy and her son are coming to mean to him that he would do something -- it seemed -- he might not normally do. Because if anyone knows how much lies and secrets can hurt when exposed, it's the hero.
While Maddy, she's strong and brave in everything she's had to deal with since the death of her husband, and I could understand why it's hard for her to explain things to her son that his dad isn't coming back. In some ways, Chase is a blessing in disguise for her son as he's a reminder of her late husband by having the same name, similar looks and in having the same career. However, I felt Maddy should have been a little more courageous in getting her son to realize that Chase isn't his father, instead of Chase taking on the responsibility that he did. Her son needed to know the truth sooner rather than later. Although, in saying that, the way Maddy's son finally realized that Chase wasn't his father was a good and gentle way for the boy to learn the truth.
Overall, Ms. Dunlop has penned a delightful read in this book about a hero and heroine needing to heal from the hurts of their past relationships to achieve the happy ever after they both deserve. Since it's palpable that these two are good for each other. The way this story ended had me smiling, because Chase needed to find a way to forgive those that wronged him if he was to have a chance at winning Maddy back and Maddy needed to realize how she really felt about her late husband and how it was completely different than what she feels for the hero. But most of all, I liked Chase's final words to Maddy. I would recommend Chase by Barbara Dunlop, if you enjoy cowboy romances or second chance romances.
OVERALL RATING

BLURB
Betrayed by his fiancée and his best friend, Chase Garrett heads out on the road with the American Extreme Bull Riders Association, determined to ride hard and keep a wall around his heart. But during a competition, three-year-old Riley Barrett bursts through that barrier when he throws himself into Chase’s arms, insisting Chase is his daddy. And Chase’s walls collapse further when he meets Riley’s mother–beautiful, vulnerable, sexy Maddy.

A widow for only a year, Maddy Barrett is stunned by her son Riley’s outlandish assertion that Chase is his father. She tries desperately to convince Riley that his father has not come home to them. When Chase and Maddy join forces to help her son, she finds herself falling fast for the sexy, hard-working bull rider—wishing he truly could be the man for Riley, and the man for her.
BUY LINK:  Amazon