REVIEW: SEX IN THE STICKS by SAWYER BENNETT 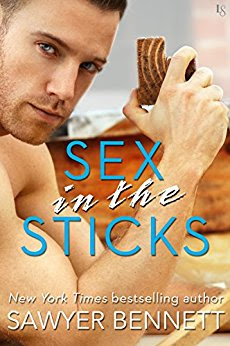 Sex in the Sticks
Love Hurts #1
By: Sawyer Bennett
Releasing May 2nd, 2017
Loveswept
+ Add to Goodreads

In Sex in the Sticks (Love Hurts #1) by Sawyer Bennett, dating columnist Valentine French decides she needs to find new inspiration to write about on her blog, because the men of New York City are all turning out to be the same career focused, talk-about-themselves type. So, when her cousin suggests she take a trip to Alaska and maybe date a few of the men living there instead, she decides it's a good idea. Yet, she never imagined she'd find love in a place she couldn't imagine herself ever staying. So, will she give Logan Burke, the local sheriff, a chance or will her online activities destroy the chance at love she never thought she'd take?

This is the first book I've read by Ms. Bennett, and if her books are all like this one in the way it was captivating, fast-paced and entertained me from the moment the hero and heroine met until the end without me wanting to put it down for even a second, then I'll be reading more of her books in the future. Although, in saying that, the way this story started took me a little while to warm up to this story, as the men the heroine has been dating sound like absolute jerks. Too obsessed with themselves and don't know much about romance, so it's no wonder she takes her cousin up on his offer without knowing much about where she's going. Yet, once Valentine meets Logan, sparks fly and this story had me hooked, because the heroine has never taken an adventure to a location like Alaska. She's a city-girl.

Both the main characters had interesting back stories, and it made me like both of them a lot. Valentine has never considered giving a man a chance at forever, because of her parents unhealthy marriage, yet I'm glad that Logan managed to prove himself. He's everything her father isn't in the way he's loyal, kind, caring and protective. I also liked that he didn't allow her to get away with anything when she thought he'd give her a free pass.

While Valentine, she's strong and brave by taking the adventure she does when she's totally unprepared for going to Alaska where she wouldn't have access to things she normally would in New York, as proven in the moment where she meets Logan for the first time. I also liked how much she shakes the small town up and made me laugh because of her blog writing, the disastrous dates she goes on and the incidents that have Logan rushing to her rescue. Seriously, there's so much to like about the heroine including how kind and caring she is by what she does for one of the secondary characters and the fact that she wasn't easily intimidated by a woman that calls her names.

Overall, Ms. Bennett has penned a delightful read in this book where the romance was red-hot, full of passion and showed Valentine wasn't afraid of Logan going all alpha on her. He's a cop, so why wouldn't he break out the handcuffs at some stage. The way this story ended had me totally surprised by who convinced Valentine to find a way to win Logan back. Then again, love can conquer anything, so why shouldn't Valentine do everything in her power to prove her love to the hero. However, it was the epilogue that wrapped this story up wonderfully, because it reveals how far Logan and Valentine have come in their relationship and how well opposites really do attract. I would recommend Sex in the Sticks by Sawyer Bennett, if you enjoy the opposites attract trope or books by authors Kendall Ryan, Kristen Callihan, K. Bromberg or Vi Keeland.

BLURB
Wake up and feel the wood! In the first of a series of irresistible standalone romances from New York Times bestselling author Sawyer Bennett, a city girl rediscovers love and lust in the Alaskan wilderness.

Valentine French may be the sassiest dating columnist in New York City, but the abundance of metrosexuals in her adopted metropolis is seriously cramping her style. Where are the beefy all-American boys? Hoping to find some inspiration, Val heads to Alaska, where the men outnumber the women fifteen to one and wrestle grizzly bears for sport. Or so she can only imagine. Suddenly the most eligible bachelorette in a town full of horny lumberjacks, Val is writing her best columns ever. But if she doesn’t get her nose out of her laptop, she just might miss out on Mr. Right.

Logan Burke is the sheriff of the little podunk town that Val finds so charmingly backward. He’s not that different from the guys she’s using for her little experiment; it’s just that one date would never be enough for Logan. As he listens to Val complain about love over beers in the local tavern, he realizes that she can’t see the forest for the trees. Because if she would ever give up her Prada bags and fourteen-dollar martinis, Logan would give her the only luxury that matters: his heart.