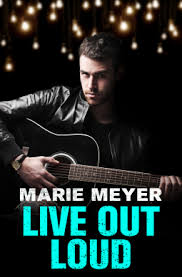 Live Out Loud
By: Marie Meyer
Releasing May 2nd, 2017
Forever
+ Add to Goodreads

In Live Out Loud by Marie Meyer, Harper King never thought she'd find someone that could understand her, especially not someone that can hear everything that goes on in the world when she can't. Except the moment she locks eyes with Thorin 'Thor' Kline during one of his musical performances at a bar, she believes she may have found a guy that sees her for her, instead of treating her differently because she's deaf. Can Thorin prove to Harper than he is her Mr. Right, or will Harper's fears tear them apart?
What an incredible read Ms. Meyer has penned in this book about a heroine that never thought she'd find a man that could make her feel the way the hero does and a hero determined to show the heroine he's willing to do whatever it takes to be with her. The way this story started with the heroine knowing she should be concentrating on her studies and not giving into the pleas of her best friend had me liking the heroine immediately, as it shows how determined she is to show people that just because she's deaf doesn't mean she can't be successful, independent and have as normal a life as everyone else. However, it was from the moment that the hero and heroine met that had me completely enthralled, as it's palpable the hero and heroine have an inimitable connection; the 'I-see-you-across-the-room-and-everyone-else-disappears' type of connection, which makes a person want to get to know the other so much more.

As for the dialogue, it was a wonderful mix of intense and teasing banter, and I loved every moment the hero and heroine converse. Thor treasures every moment he spends in Harper's company, even though he knows the things he's keeping to himself; things that she desperately wants to know about him could break them apart, if he doesn't tell her sooner rather than later. Will she ever learn what happened to him in the past that keeps him from wanting to have a forever relationship? Will Thor realize that he will never be like his father? Will the hero be able to protect his mother?

Both the main characters are compelling due to their back stories. The heroine didn't have the easiest time growing up, because she's deaf and everyone treats her differently even her parents. I felt sorry for her having to deal with the way her parents treat her, so she's lucky to have found a man like Thor. Someone that is willing to learn every way possible to be able to communicate with Harper better. Can he do it? Will the heroine be impressed by his efforts? Will the heroine's parents finally be able to bridge the communication barrier they have with Harper?

While the hero, he's been through a lot in his life and has suffered physically and emotionally, so I could understand why he was so protective of his mom and determined to keep her safe from the past. However, it made me feel sorry for him when it came to his never wanting to have a long term relationship. How could he believe he'd ever turn out like his dad when he's so protective of his mom? Moreover, I liked how he talks about music and his guitar,  and loved how it too helps him to communicate with Harper. She has quite a knack for figuring out what songs are being played.

Overall, this was a really good, engaging read with plenty of chemistry between the main characters that show love is possible, if you're willing to take a chance and not let the past have power over you. The way this story ended had me cheering for this couple's happy ever after, because of the effort Thor has to go to in winning Harper back. Certainly, it was a brilliant use of his talents as a musician, even though Harper doesn't make things easy for him. However, it was the epilogue that wrapped everything up perfectly, as we learn how far each of the main characters have come separately and together. Harper definitely knows how to surprise Thor. I would recommend Live Out Loud by Marie Meyer, if you enjoy the opposites attract trope, a story encompassing a couple that are meant to be, or books by authors Lily Everett, Donna Alward or KE Osborn.

BLURB:
I thought I'd live in silence forever . . . and then I met him.
I'll never be able to hear, but music has always been a source of comfort for me. Rather than listen to the rhythm, I can actually feel the beat pulsing through me. It's pure bliss. So the moment I saw Thorin playing his guitar, I was mesmerized. I'd never seen anything more beautiful . . . or intimate. I couldn't tell where his body ended and the song began. He's everything I need in my life . . . I'm falling fast, hard, and deep.

I want him more than anything. But while I live in silence, Thor lives in secrets. He's holding something back-something that's keeping this intensity, this longing from being real. And the silence may be too loud to bear . . .
BUY LINK:  Amazon