REVIEW: FINDING YOU by JO WATSON 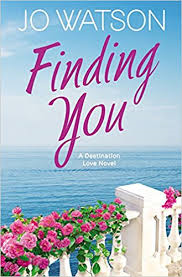 In Finding You (Destination Love #3) by Jo Watson, Jane Smith is determined to find her birth father, so she takes an impromptu trip to Greece, knowing only the smallest of information that her biological mother met him while she was on holiday and that he was a tour guide. However, when she begins to get close to the man that's offering to show her around Greece, it seems history may be repeating itself. Will Jane fall completely under Dimitri's spell, or will her heart be broken because of the news she discovers that could make her run from her chance at happy ever after?

Although this story can be read as a stand-alone, I wished I had of read the first two books before this one, just so I could learn more about Jane's friends, why they have such a wonderfully strong bond of friendship and how a couple of those friends managed to achieve their own happy ever after. However, in saying that, I totally enjoyed this story, despite the fact that it's only told from the heroine's point-of-view. The way this story started had me concerned for the heroine. Why was she acting the way she is? Is something wrong with her?

As for the dialogue, it was interesting and drew me into this story, because of the heroine's back story and all that she goes through within this book. Should she stay in Greece when it seems nothing is going her way? Will she give Dimitri a chance, especially when he keeps proving himself to be a good guy? Like he did when they first met and Jane completely embarrassed herself. Moreover, I liked how Dimitri won her over with his friendliness and his desire to show her all that Greece has to offer and which makes people never want to leave. He's kind, caring, persuasive and takes her on a wonderful adventure where she does things she never thought she'd do.

Truly, Jane and Dimitri bring out the best in each other and for the first time Jane realizes how much she's closed herself off to love and how much she's isolated herself from her own family in order to protect herself. Then again, being adopted and rejected by a mother that doesn't want anything to do with her makes it understandable why Jane is the way she is. Still, she's strong and brave by going on the adventure she does, even if it doesn't end with the outcome she hoped for. I also liked that she didn't give up hope, even when it seemed her chances of finding her biological father were hopeless.

Overall, Ms. Watson has penned a really good read in this book where the chemistry between this pair was strong and had me cheering that Jane and Dimitri would be able to overcome the moment where they part ways, because of Dimitri's secret and the fact that it makes Jane believe she can no longer trust him. The way this story ended was wonderful, as Dimitri isn't about to let anything stop him from winning Jane back and if he has to use any means necessary -- such as getting help from someone close to her -- than he will. I would recommend Finding You by Jo Watson, if you enjoy holiday romances or books by authors Rachel Van Dyken, Cindy Kirk, Marina Adair or Jennifer Probst.

Being adopted never made Jane Smith feel unloved, just unlike the rest of her family. As her twenty-fifth birthday approaches, she is struck by an overwhelming longing to finally find her place in the world. So in a very un-Jane-like move, she books a last-minute ticket to Greece to find her birth father and the real Jane. All she knows about him is it that he was a tour guide named Dimitri. Armed with this knowledge and several surprise boxes of condoms from her mom (not embarrassing at all), Jane takes off.

Within minutes of landing she makes two important discoveries. First, everyone in Greece is named Dimitri, and second, fate might be playing a sick joke on her when a sexy tour guide called Dimitri comes to fetch her from the airport. He offers to help Jane with her search---if she'll go on an adventure with him. Stable Jane would never risk a steamy vacation romance. But real Jane might finally be ready to listen to her heart. Will Jane find her biological father, or will she end up finding something else entirely?