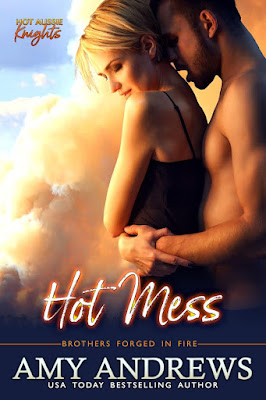 In Hot Mess (Hot Aussie Knights #1) by Amy Andrews, Logan Knight never thought he'd see Arabella 'Bella' Tucker ever again. Not after how she pushed him away nine years ago and he didn't fight for their relationship after the loss they suffered. Yet, now they have a second chance, if only he can convince her to give him one. Except Logan faces a major hurdle in the fact that Bella has lost her memories of their time together. Will being with Logan help her retrieve her memories or will Bella uncovering the secret he's keeping from her tear them apart forever?

Ms. Andrews writes such compelling stories that I always find myself getting hooked by from the very first page and this story was no different. Seriously, Hot Mess is a captivating read encompassing the second chance romance trope, where the characters have a lot to overcome. Not only because of Bella's amnesia, but because of her parents, Logan's job as a firefighter and the secret the hero is keeping. Will Logan win Bella back? Will she be able to forgive everyone that's keeping one of the most important secrets of her past from her? The way this story started with the prologue made me sympathize with Logan and the rest of his family. They've lost someone important and they're dissatisfied with the proceedings they're having to sit through.

As for the dialogue, it was intense, well-written and had me flipping the pages determined to learn more about Logan and his family. They're quite close and I liked that they could tease each other the way they do. It breaks the tension and stress they're under while on the job and shows that they'll do anything for each other, which is proven by what one of Logan's relatives do to bring the hero and heroine together when it seems all hope is lost for their second chance.

With the main characters, Logan was a marvelous hero and I could understand why he thought them spending time together might help Bella recover her memories. Will it happen? Will showing her various things that he kept from their time together help her? Also, I liked that he was supportive, even though it was hard to handle the fact that she doesn't remember their time together nine years ago. A time when they were so in love and there were so many fond memories including the one he's keeping secret that ended in heartbreak. The one that could rob them of a second chance if she ever learns the truth before he's ready to tell her.

While Bella, she's been through a lot in her past and has overcome so much to get to where she is. After her and Logan went their separate ways, it wasn't easy for either of them and I couldn't help but be affected by the heroine's emotions. She's a survivor and a fighter, which is proven by all that she's done since her accident to get to where she is. I also liked that she was willing to give Logan a chance, because they have so much chemistry that shouldn't be denied. Chemistry which was strong in the past and only seems stronger as they start over in the present and get to know each other again. But what I liked most of all is that Bella was willing to fight for her relationship with Logan this time, and didn't allow others to influence her decision.

Overall, Ms. Andrews has penned a fabulous read in this book where the dialogue, both the main and secondary characters, and the gratifying ending has me looking forward to more of this series. The way this story ended had me concerned for one of the secondary characters, but I liked how things turned out for Bella and Logan in the end. Someone in Logan's family wants him to be happy, and it's palpable that the heroine being back in his life makes him that way. But what I liked most about the ending was Logan's surprise for the heroine. No way was he going to let her go this time. I would recommend Hot Mess by Amy Andrews, if you enjoy the second chance romance trope or books by authors Sinclair Jayne, Trish Morey or Victoria Purman.

BLURB
Firefighter Logan Knight thinks it's fate when he meets Arabella Tucker again, nine years after their brief, intense relationship ended. Until he realizes that Bella doesn't recognize him and all of their memories together are completely erased from her memory.

Bella may be oblivious to their history but she can’t deny their scorching chemistry and the possibility of a future with the mystery man from her past. Logan wants a future too, but he can’t go there until Bella knows everything they shared. Her parents, though, want to protect her from the emotional cost of old memories and so Logan is reluctantly persuaded to let the past lie.

But when Bella starts to uncover the truth, she is shocked by the revelations. Can she move beyond the hurt of her shared history with Logan and begin their new story?
BUY LINK:  Amazon