REVIEW & GIVEAWAY: YOU MAY KISS THE BRIDE by LISA BERNE 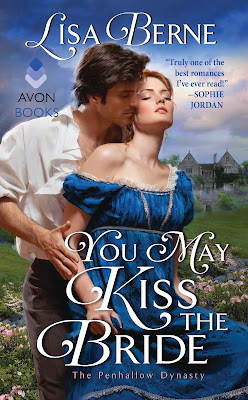 You May Kiss the Bride
The Penhallow Dynasty #1
By: Lisa Berne
Releasing March 28, 2017
Avon
+ Add to Goodreads

In You May Kiss the Bride (The Penhallow Dynasty #1) by Lisa Berne, Livia Stuart isn't Gabriel Penhallow's type, but for some reason she somehow manages get under his skin. So much so that soon after meeting her he finds himself kissing her. Having no choice but to get engaged, Gabriel discovers there's no way he'll be able to stick to his plan of living separate lives after producing an heir. Can he find a way to prove to Livia that he's falling in love with her, or will the thought of becoming a Penhallow and all it entails make her run?
In the beginning, I struggled to get into this book. I thought the heroine was a brainless twit and the hero an emotionless robot due to their dialogue the first time they meet, but by the end I totally enjoyed this story. Because the more I read of it, the more I could understand why the hero and heroine are the way they are. They've never had tight family ties with both being treated like they are burdens, instead of people to be cherished by their loved ones. Can they both give each other the love they deserve?
As for the dialogue, it was intense due to the main characters back stories and everything they go through on their journey to happy ever after. Livia suffers the wrath of her frenemy, Cecily, because of what the woman believes the heroine does to her. How is Livia supposed to be everything Granny Penhallow expects her to be with the rumors going around about her? Will she be able to prove the rumors wrong? Then there's the hero's Granny who is tough on Livia, which made me feel sorry for the heroine. It's not her fault she doesn't know half the things she should know. If only her Aunt and Uncle could have been more kind and caring. Really, it's understandable why the heroine is so independent and determined to do everything she can to help those that need it. Because she had to do most things for herself and never wants anyone to feel the way she was made to feel growing up, which is proven by what she does for the hero's Granny, cousin and those that work for the Penhallows.
While the hero, he knows it's his duty as one of the few Penhallow men left to marry and have kids. Still, I could understand why he was so resistant of his feelings for Livia, because of the 'Penhallow' way of relationships. How could he possibly give the heroine what she deserves in a relationship when he's never witnessed a good marriage? However, the more time they spend together, the harder it is for him to resist Livia. Moreover, I liked the growing bond between him and his Gran. She isn't the warmest relative with her always telling him what to do and expecting him to listen, especially when it comes to who he should marry, but I liked how they grow really close in the end.
Overall, Ms. Berne has penned a really good read in this book, which had plenty of chemistry between the main characters that spilled over onto the pages wonderfully, and illustrated how right these two are for each other despite the fact that they are complete opposites. The way this story ended had me concerned for the heroine with what happens to her. Luckily, the hero was determined to make things right with her after making the wrong assumptions, otherwise things could have turned out differently. Still, I loved how the ending wrapped everything up nicely and answered the questions that were floating around in my head. How did things end up with Cecily? What would Livia and Gabriel do about Granny? I would recommend You May Kiss the Bride by Lisa Berne, if you enjoy historical romance, the opposites attract trope, the marriage of convenience trope or books by authors Karen Ranney, Callie Hutton or Christie Caldwell.

BLURB:
In an unforgettable debut, Lisa Berne introduces you to the Penhallow Dynasty—men destined to marry, but hesitant to love.

Wealthy and arrogant, Gabriel Penhallow knows it’s time to fulfill his dynastic duty. All he must do is follow “The Penhallow way”—find a biddable bride, produce an heir and a spare, and then live separate lives. It’s worked so well for generations, certainly one kiss with the delectable Livia Stuart isn’t going to change things. Society dictates he marry her, and one chit is as good as another as long as she’s from a decent family.
But Livia’s transformation from an original to a mundane diamond of the first water makes Gabriel realize he desperately wants the woman who somehow provoked him into that kiss. And for all the ladies who’ve thrown themselves at him, it’s the one who wants to flee whom he now wants. But how will he keep this independent miss from flying away?
Buy Links:      AMAZON | B & N | GOOGLE | ITUNES | KOBO

She had been dismissed. Livia rose and after dipping the briefest of curtsies in Lady Glanville’s direction, went to the door with long strides, so angry that she felt she had to get out of there or explode. Behind her she heard Aunt Bella saying in a soft little bleat, “Livia! No word of gratitude! Pray come back!” Instead, she closed the door with exaggerated gentleness and leaned against it for a moment.
By the bannister stood a maidservant with an armful of gowns. With a muttered sentence of thanks Livia took them and hurried upstairs to her room where with savage satisfaction she flung the gowns against the wall, leaving them to lie in a crumpled heap on the floor. She paced back and forth, back and forth, until the red haze of rage subsided. Then she went to her bed and dropped full­length upon it with unladylike abandon, causing the old wood frame to creak alarmingly.
It was stupid of her, she knew, to react like that to the Orrs. But it was hard, so hard, when Cecily had every­ thing and she had so very little. No parents, no brothers or sisters; no money, no education, no prospects.
Your future must be thought of, too.
It was strange, now that she considered it, how little time she had spent thinking about her future. Possibly because there was no point to it. In her existence here she was like a great hoary tree, deeply, immovably, rooted into the earth.
She couldn’t even hang on to the morbid hope of inheriting anything from Uncle Charles when he died. He’d run through most of Aunt Bella’s money ages ago, and year by year everything had slowly declined, dwindled, faded away. Now there wasn’t much left; the estate barely brought in enough for Aunt Bella to pay for her cordial, and for Uncle Charles to spend his days hunting, drinking, and eating. Speaking of romantic marriages.
Well, it could be worse. At least she didn’t have a mother like that revolting Lady Glanville. Imagine having her breathing down one’s neck all day.
Still, this was only a small consolation. A very small consolation.
Livia thought about Cecily’s beautiful white gown and those elegant kid slippers with the dainty pink rosettes.
It was those rosettes that did it.
Envy, like a nasty little knife slipping easily into soft flesh, seemed to pierce her very soul.
Abruptly Livia twisted onto her side and stared at nothing.
She would not cry.
Crying never helped anything.
There came to her, suddenly, the memory of the first time she had met Cecily, some twelve years ago; they’d both been around six. Cecily and her mother had come to call. Livia, recently arrived from faraway India, desperately lonely, was so anxious to be friends with the lovely, beautifully dressed girl with the long shining curls. Shyly she had approached, trying to smile, and Cecily had responded by saying in a clear, carrying voice:
“Oh, you’re the little orfin girl. Your papa was sent away from here and he died. And your grandpapa was a runaway and he drownded. And your mama drownded, too. Why is your skin so brown? Are you dirty?” And she had backed away, to hide behind the skirts of her mother Lady Glanville, who had said to her, with that same cold smile that never reached her eyes, “Poor little Livia isn’t a native, my dear, she’s every bit as English as you and I. The sun shines quite fiercely in India, and she had no mama or papa to make sure she stayed under her parasol. Do you see?”
Livia had never forgotten the burning sense of shame from that day. Nor had Cecily made it any easier, for from time to time she would laughingly recall the occasion of their first meeting and how she had thought Livia to be unwashed, as if it was the funniest anecdote in all the world.
Livia did not like to remember, even if only hazily, how when she was four, the monsoon season struck Kanpur with devastating onslaughts of rain. Both her widowed mother and her grandfather had died in a great flood, and it was with grudging reluctance that Uncle Charles had sent money for his niece’s passage to England.
Upon arriving in Wiltshire, Livia was not so much welcomed into the home—if such the ancient, ram­ bling domicile known as Ealdor Abbey could be so termed—of Uncle Charles and Aunt Bella, as absorbed. Aside from grumbling within earshot about the expense of feeding her, Uncle Charles barely noticed her. Aunt Bella, childless, somnolent, always unwell, with interest in neither Society nor useful occupation, accepted Livia’s presence without a blink but also without care or concern for the little girl for whom she was, ostensibly, responsible.
Oh, you’re the little orfin girl.
Livia smiled without humor.
Yes indeed, Cecily certainly had a knack for getting to the heart of things. 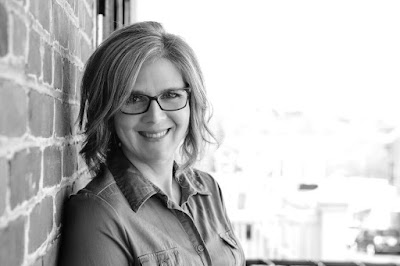 Lisa Berne read her first Georgette Heyer book at fourteen, and was instantly captivated. Later, she was a graduate student, a grantwriter, and an investment banker, but is thrilled to be returning to her roots and writing her own historical-romance novels! She lives with her family in the Pacific Northwest.