REVIEW: HIS FAMILY OF CONVENIENCE by AMY AYERS 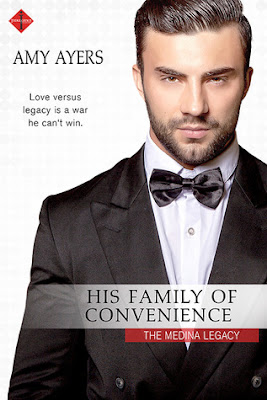 In His Family of Convenience (The Medina Legacy #1) by Amy Ayers, Senna Callas can't believe Marco Medina is back in her life after disappearing for a year without even bothering to contact her, especially after the incredible night they spent together. But he's back for one thing and one thing only and that is to meet his son, so he can be there for him. Will Senna give Marco what he wants, even though his future doesn't include a life with her; or will Marco go against family obligations and follow his heart?
Ms. Ayers has delivered a wonderful, heartwarming read in this story, which grabbed my attention from the start with Senna discovering Marco is back and making demands of her because he wants to get to know his son. How can she possibly say no to him? Will Marco even accept no for an answer when he doesn't know the meaning of the word? However, it was from the moment that these two came face-to-face for the first time in this story that had me flipping the pages rapidly, determined to discover more about their past history and why Marco has been gone for so long without staying in touch.
As for the dialogue, it was intense due to the main characters back stories and all these two go through on their journey to happy ever after. The moment when I read what Marco was wanting to do to Senna and their child had me shaking my head at him. How could he do what he wants to do to Senna when there's such a strong bond between her and their son? However, Marco did redeem himself when his plans change and he starts having to decide what he wants most. Will he honor his family obligations or follow his heart? Marco is arrogant, confident and I liked how determined he was to honor his family obligations, even though he knew he wouldn't be happy in the long run. Luckily, his brother offers him some really good advice once they get things sorted out with the family company and he makes a decision that could be the best decision he's ever made.
While Senna, she's strong and brave having to deal with not only Marco but most of his family. It isn't easy, especially when they make her feel like the odd one out, but she handles everything as best she can. She's also a really good mother and I could understand why she wants Marco to be a part of his son's life, even though she and the hero may not ever be anything more than friends. Senna didn't know her father and she doesn't want her son feeling that he's not good enough to warrant the love of both his parents.
Overall, Ms. Ayers has penned a wonderful read in this book encompassing well-written dialogue, a hero uncertain of whether he can honor his family obligations when he loves Senna; a heroine determined to do what's right for her son, even though she may end up with a broken heart; and a couple with so much chemistry between them that makes it hard for both to resist the other and hard to walk away from what the future may hold if they can find a way to be together. The way this story ended had me sad for the heroine because of her loss, but had me smiling because Marco definitely knows the right things to say to win Senna back and what he's doing to prove he wants nothing more than happy ever after with her is memorable. What a way to honor their families and help those that need it. I would recommend His Family of Convenience by Amy Ayers, if you enjoy the second chance romance trope or books by authors Virginia Nelson, Diane Alberts, Meg Benjamin or MK Meredith.
OVERALL RATING

BLURB:
Senna Callas’s one-night stand with her alpha asshole boss, Marco Medina, was supposed to mark the end of her internship and their ridiculous attraction. After being unreachable and ignoring Senna for a year, Marco sweeps back into the country and summons her to his office, revealing he knows her secret…the secret created during their explosive night together.
Marco is determined to be there for the son he’s just discovered he has, but when it comes to being with Senna, his choices aren’t his own. His meddling family expects him, the firstborn son, to follow through with the arranged marriage set up when he was a child. And Senna has no plans on being his mistress and still resents how her attempts to contact Marco were ignored. The only thing going right between them is the attraction that burns no matter the complicated situation they’re in.
Marco would do anything to protect his family, anything except decide between the legacy he was born into and the young family he’s just found…
BUY LINK:  Amazon
at 00:56